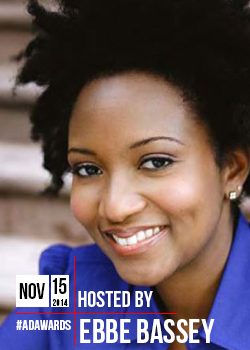 Applause Africa, a multimedia platform that aims to celebrate, empower and connect the people, culture and visions of Africans in the Diaspora, announced today the 2014 Honorees for the AFRICAN DIASPORA AWARDS. The 4th Annual ADA Awards will be held on November 15 at Lincoln Center’s Gerald W. Lynch Theater at John Jay College. The Red Carpet and cocktail reception begin at 6:00PM, followed by the awards show at 7:00PM.

The AFRICAN DIASPORA AWARDS celebrates the accomplishments of exemplary individuals from the African Diaspora who have excelled in various spheres of life, as well as individuals in society who working towards the advancement of Africans in the Diaspora and Africa, as a whole.

of George”, “NYPD Blue”, “Law & Order: SVU”) , the ADA Awards is one of the most electrifying and highly anticipated awards shows celebrating the African Diaspora.

.
The 2014 Awards theme “Homecoming Revolution” will lift up the positive and inspiring movements of Africans in the Diaspora who are driving the revitalization and economic progress in the global African community.

The ADA Awards are sponsored, to date, by: Vlisco and Arik Air International.

For additional information and to purchase tickets, visit www.africandiasporaawards.com.

Thank God It's Friday! Start Your Weekend at L'Espace