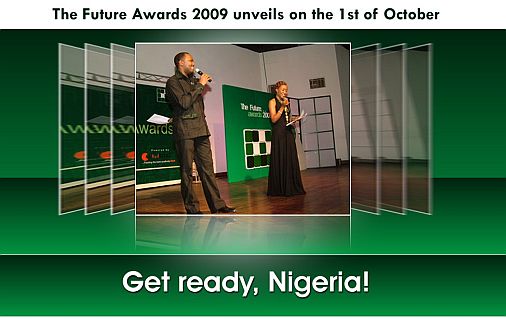 Lagos, Nigeria [September 18th, 2008], The Central Working Committee for The Future.. Awards has announced the start of the next season of Nigeria ’s most respected youth event. The website, www.thefuturenigeria.com has the bold announcement on its page: ‘The Future Awards 2009 unveils on the 1st of October – Get Ready Nigeria’.

Christened ‘Africa’s biggest youth awards’ by the London Metropolitan University last year, the 4-month long project which is in its fourth year goes beyond the Awards itself, encompassing the national road shows, and various pre-events and conferences all geared towards inspiring young Nigerians.

The hugely successful 2008 edition which held January at the Muson Center in Lagos had in attendance a representative of Nigeria ’s Vice President, Dr. Goodluck Jonathan, Vice President of the World Bank Obiageli Ezewesili, Immediate Past President of the Nigeria Bar Association, Olisa Agbakoba (SAN) amongst others.

Last year’s award winners, all aged between 18 and 31, included Bukola Adubi for Entrepreneur of the Year, rave artiste D’banj for Musician of the Year, and author of multiple award-winning book Half of a Yellow Sun, Chimamanda Ngozi Adichie, who cornered the biggest award for Young Person of the Year.

Said the Chairman of the Independent Audit Committee, Dr. Reuben Abati: “We are excited to once again be on the march to rewarding the brightest and best young minds in Nigeria . From a dream by three young people three years ago, this idea has grown to become not only the biggest event for young people in Nigeria, but one of the top 5 Awards events in the country.”

The Awards and The Future.. Project will be kicked off with a strictly-by invitation event for a select 400 guests on the 30th of September, as a prelude to kicking off the awards process on the 1st of October, an annual symbolic move for what the organisers call “the process for a New Nigeria” to coincide with the anniversary of Nigeria’s birth as a nation.

The launch event will see the unveil of a new logo, new website, new categories, new judges, details of the national tour, the official date of the Awards, amongst others. The organisers also announced a tribute planned for the late Prof. Jadesola Akande, Nigeria ’s first female law professor and a member of the Awards’ Board of Trustees.

“It’s amazing, and to be truthful, quite humbling, the kind of excitement that this project inspires – and from a vast array of people and institutions,” added the project’s PR Director, Emilia Asim-Ita, “That is why for the first time, we are launching the Awards with another major event, because the profile of the Awards has gotten so huge that nothing less is expected, and nothing less will be delivered.”

As noted, all of this begins with the official launch, which will be an exclusive media and VIP event holding on the 30th of September, at a venue in Lagos disclosed exclusively to the guests.“The Future…” belongs to those who believe in the beauty of their dreams…
# # # 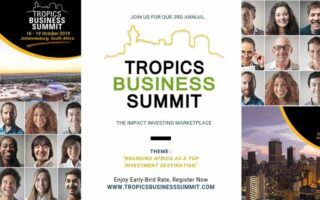 The Colour in the Desert Fashion Show