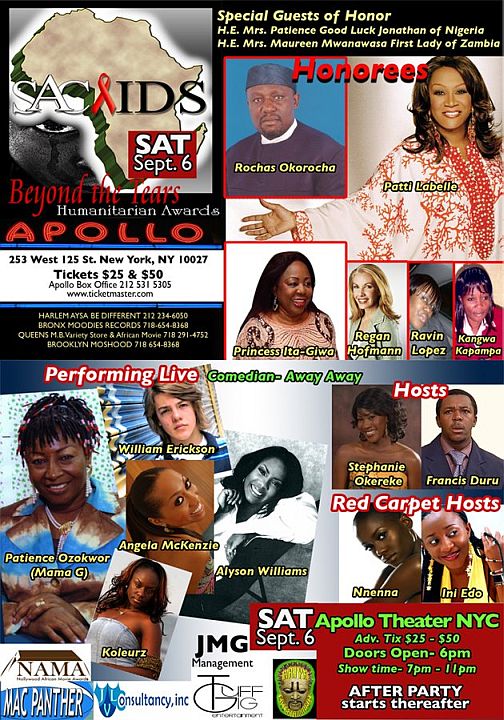 Not even the crazy downpour/storm that hit New York on September 6th, 2008 could stop the Second Annual Beyond the Tears Humanitarian Awards. And, while the legendary Apollo theater was not filled to capacity, the show was nothing short of perfection.

The second annual event began with the very funny, Nollywood handsome actor and comedian, Francis Duru welcoming the audience. His jokes through out the evening was the icing to a great evening. After his welcome remarks, Duru introduced members of the SACAIDS, the non-profit responsible for producing the event. Hardy Jimbes, a soft spoken man with dreadlocks that run a little beyond this neck line and who is the President of SACAIDS, explained his decision to start SACAIDS. He told the audience he had an encounter with Winnie Mandela and throughout the encounter which lasted about 3-4hours, she kept reminding him that she was old and he was young and could make a difference. A difference indeed he has made and Rebeen Pasha, the Senior Advisor to SACAIDS continuing where Jimbes left off, eloquently explained the many projects the organization was involved in within the USA and other countries like Nigeria. The last of the SACAIDS to speak was Dr. Amadu Diagne.

“Three things I want you to remember if you don’t remember anything from this event. 1) HIV is preventable; 2) If you happen to have HIV, there are very effective treatments for you; and 3) Make sure you get tested. Tell everyone you meet to get tested and ask, “do you know for sure that you are negative?” urged Dr. Diagne. The theater was dead silent as the audience paid keen attention and seemed to digest his statements. “Of the 1.3 million people infected in the USA, 400,000 are walking around with no idea that they are HIV positive,” exclaimed Digane.

Digane’s sober statistics and urging was followed with a simply talented and impressive performance by the group/artist Koleurz. After Koleurz was probably one of the most eloquent, strong and attention grabbing rap artist with solid lyrics that spoke to the heart, D’Cypha. D’Cypha’s performance might very well have been a speech but only in rap form. It was moving. After D’Cypha’s performance the first set of awards were presented to Raven Lopez, a youth activist who was born HIV positive and Dr. Kengwa Kapampa, community activist. Shortly after, a mid-session performance followed and it was later time for a presentation of the US Advocacy & Media Honoree which was awarded to Regan Hoffman, the current Editor-in-Chief of POZ Magazine. In 1996, Hoffman revealed she was HIV positive and had contracted the disease from her first and only boyfriend, after her divorce. Her award was for her personal and professional tireless work with HIV/AIDS nationwide and globally. Patti Labelle who was the recipient of the US Activist Icon Award, was absent.

After Erickson and McKenzie’s performances, Nollywood A-list Actress Stephanie Okereke who co-hosted the event with Duru was presented an award as the recipient of the Nigerian Media Advocacy award for her work against rape and vesico vaginal fistula. Okereke, dressed in a brown form fitting lightly ruched knee length dress, accepted the award from her colleague, Duru. It was time again, for another Duru joke.

Duru asked the wives in the audience to question the intent of their husbands when they see pictures of themselves in their husbands’ offices. Why? Well, according to Duru, there was a man who had his wife’s picture at work. The wife thinking it was a romantic gesture, wanted to hear him say what it meant to have her picture in his office. After much urging, he looked at her and told her, whenever he looked at her picture, all of his problems disappear. She asked, “why?” He said because he is reminded that he has a bigger problem at home, her! Needless to say, the theater exploded with laughter, especially among the men who seemed to enjoy that a bit much!

Finally, it was time to introduce Senator Princess Ita-Giwa, former wife of the reputable Journalist Dele Giwa who was killed by a mail bomb, in his home, on October 19th, 1986. A political fixture in Nigeria, Giwa in accepting her award as the recipient for “Nigeria People’s Advocate,” acknowledged work in HIV/AIDS area but also emphasized attention be given to address the needs of orphaned children in Africa.

A subsequent performance by Alyson Williams and an introduction of the Guest of Honor, Her Excellency Mrs. Patience Good Luck Jonathan, wife of the Vice President of Nigeria followed. She was absent and sent a rep that proceeded to read what appeared to be about four pages of speech, on her behalf, to the audience. The audience began showing signs of impatience, especially since the rep looked uncomfortable as she held the mic in one hand and attempted to read and then turn the page over. When the rep finished, the audience responded with loud cheers that seemed to indicate a relief that she got to the end, rather than the substance of what she was reading.

The evening of celebration was almost near after the introduction of the Keynote Speaker Chief Rochas Okorocha, who apparently was on his way to the States, but had to make a U-turn to tend to issues regarding the President of Nigeria. An American representative who works closely with Okorocha spoke on his behalf and pledged to support SACAIDS, financially, in its efforts to combat and educate on HIV/AIDS. The evening ended in a very intriguing and amusing way, especially to the American audience present. One of Nollywood’s respected actresses, Patience Ozokwor now turned singer aka “Mama G” performed a couple of hits one of which was THIS NATIONAL MOI MOI SONG. Her dancers were terrific and so was she, especially when she got to doing some dance moves. The African and especially Nigerian guests appeared to not get enough of her as they cheered, very loudly, while non-Nigerians and Americans in the audience looked on, amused. 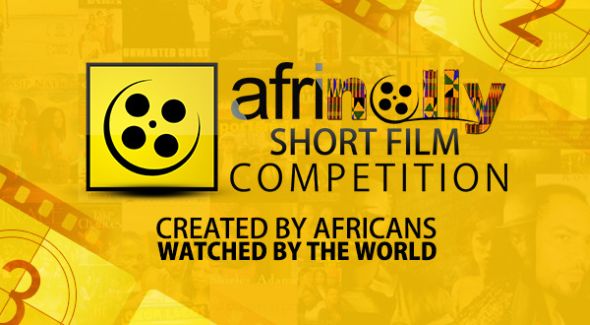 Genevieve Nnaji On Oprah’s, “The Most Famous People in the World” Show!