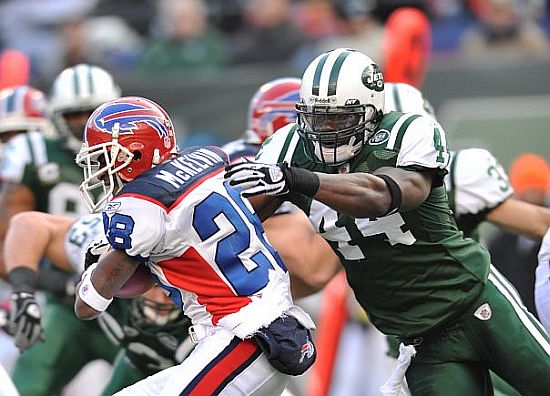 “It’s Time for Africa,” sang Shakira at the kickoff celebration of the 2010 FIFA World Cup 2010 over the weekend. How true and illustrated with the first ever Africa Fashion Week, New York (AFWNY). AFWNY is an event produced by twenty-three year old Adiat Disu, the daughter of an ex-World cup player, is focused on “break(ing) through the New York fashion noise,” by bringing African culture through its fashion week to Americans. The event producers have just announced the addition of James Ihedigbo (ee-HEAD-ee-BO), NFL’s New York Jets Safety#44to its list of strong supporters for its inaugural event.

Ihedigbo, son of Nigerian immigrants, was born on December 3rd, 1983. While he initially played soccer, which made his father proud, he found his true love in football. Although initially disappointed with his son’s choice to abandon the game of soccer, Ihedigbo’s now deceased father encouraged by his son’s strong work ethics and love for the game, soon became one of his biggest fans.

Indeed both of his parents had already set the blue print for their son, especially with the importance of strong work ethics and giving back to your local community. Both father and mother managed to raise their family while simultaneously pursuing their PHD(s) at the University of Massachusetts. Upon obtaining their degrees, they set out to fulfill yet another goal, give back to their local community by opening the Nigerian Agricultural Technical Community College in Nigeria.

The example modeled by his parents has been exactly what Ihedigbo has tried to follow. The Jets Safety is throwing his full weight/support behind AFWNY, and will be one of the celebrities in attendance at the event. In addition, the football rising star also has a charity organization, HOPE Africa Foundation, established to provide scholarships for African children, in Africa, to obtain an education.

To purchase your  tickets, visit www.afwny.com.