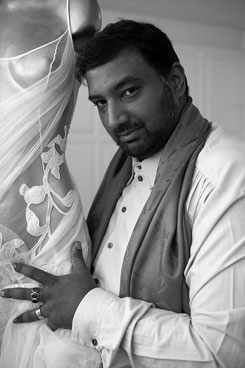 Hello hello! We hope 2007 was all you wanted it to be for you! We certainly had fun launching our blogazine, making new friends and discovering the talented, motivated and simply beautiful fashion and non-fashion personalities out there. Thanks to the individuals we had the privilege of interviewing who helped us raise our fashion, business, health and other creative consciousness:Obi Asika of Storm Records, Amsale Aberra of Amsale, Jack Yan of Lucire Magazine, Entrepreneur extra-ordinaire Toni Payne, Ayo, Yemi Osunkoya of Kosibah Creations, D’Banj, Renato Palmi, Fashion Designer Lola Faturoti, Donna Green-Goodman, among many wonderful folks we interviewed this year.

Since our official launch in June of 2007, we think we have achieved a lot but will save going through the checklist and refer you to some of our press accolades in our archives. You make the conclusion for yourself! As we say goodbye to 2007 and usher in 2008, we crank that fashion dial as far back as we can to give a recap of individuals, organizations, events, news, trends and headlines that rocked Africa’s Fashion Industry in 2007!

LADYBRILLE AFRICAN DESIGNER OF THE YEAR
Being a fashion designer we think includes making great clothes, giving back to your African community [whether you are producing some or all of your designs locally to create jobs], educating and mentoring among other duties. We have paid careful attention througout the year and we are confident in our decision. So, drum roll please!The award goes to South Africa’s Gavin Rajah!

Why we chose him? While we have to be honest that we would love to see more ‘African’ prints such as Shwe shwe on his runway and more black faces, we neverthless feel he truly deserves this award. Rajah is a strong designer with a clear understanding of branding, marketing and PR, he sources 100% of his designs locally in South Africa and mentors S.A’s emerging designers; this year Rajah took four mostly ‘black’ South Africans with him to Paris Fashion Week. Rajah is also a UNICEF ambassador that takes his job seriously. He was recently commissioned and designed a doll as part of the collection for the Frimousses de Créateurs et Frimousses du Monde. “The doll will be auctioned during an event hosted by singer and UNICEF France Goodwill Ambassador Laeticia Hallyday and is expected to raise approximately €50,000 (or about $74,000) for UNICEF’s programmes.” Be sure to congratulate him on winning this award!

REAL ESTATE:It was a stylish year for Jozi with Cutting edge residential block for Jozi’s Fashion District. “The 15-storey building is the first residential development in the Johannesburg’s CBD’s colourful Fashion District, a 32-block area bounded by Von Wielligh, Jeppe, End and Commissioner Streets, once the centre of Johannesburg’s old clothing industry and still home to a host of fashion related businesses including haberdashery shops, milliners and fabric dyers.”

PHOTOGRAPHY:Vivianne Sassen a fashion photographer for high end fashion magazines in Europe is highly focused on breaking the cliche image of Africa. Sassen got a breakthrough this year when she won the Prix de Rome, a Dutch award for artists aged 35 or under; for a series of photos she took in Ghana.

MODELS ON THE MOVE:Alek Wek publishes her book about her experience from Sudan to the Runways, fashion icon and Supermodel Iman expands her business portfolio by adding a Jewelry line and hosting Canada’s Project Runway ; and Naomi Campbell looks to create opportunities for models in Kenya which we hope will help resolve the lack of black models on fashion runways.

FASHION LAW/POLITICS:The lack of black faces on the runway was also a story that Africa’s fashion industry had to deal with. The debate continues into 2008 but I hope we can figure out a way to create opportunities for black faces on Africa and global fashion runways. By the way, I would like to see an end to the practice of Africans themselves bringing models or music artists from overseas and paying them enormous monies while their local models and artists scrape to get by.

Still on the legal end of things, while the world seemed crazy for African prints and drew inspiration to create their ‘Africa inspired’ designs, one African country, Ethiopia, thought the ‘Africa inspired’ designs amounted to theft when British designer Mathew Williamson showed his African inspired designs for Spring 2008. There might be some teeth to their accusations. This year in the world of Fashion Law, we are seeing law firms create fashion law departments to aggressively fight copyright and other intellectual property infringers. Read more about Ethiopia and Williamson here.

FASHION MEDIA:2007 was all good when it came to Africans telling their own stories. In print, we saw the official launch of JTON magazine by Joi Tongo, Haute Magazine by the 21 year old Dammie Amolegbe and South Africa’s Khanyi Dhlomo’s launch her very savvy Destiny Magazine. In the online sphere, of course Ladybrille Blogazine , BHF Magazine, Jamati Online and more. Our other favorite African fashion/fashion related bloggers Cos We are African, Bella Naija and Annansi Chronicles also kept us in the know of African fashions & style.

It wasn’t all groovy on the media end. A big scandal rocked South Afrca’s media industry as media24 the people responsible for some very high end lifestyle/fashion publications announced that some of their employees had falsified information on circulation. What a scandal!

FASHION ART:Canadian based Okwui Enwezor provided a unique platform for African art to really tear down the pessimistic image of Africa.

CHARITY:There were so many charity shows to help Africa in both Africa and the Western fashion sphere. One we featured that we think stood out was the “Catwalk the World Fashion For Food “ event and the organizers behind the campaign.

FASHION FILM:We still think Nollywood, Gollywood and all the African woods out there need to step up their game and give us the combo of quality African fashions and films that make us say “YES O!” Until then, we have nothing to report as to fashion and film.

FASHION MUSIC:We saw lots of interesting quality videos released from the African continent. Videos we like, some were not released in 2007 but are still amazing: Ayo the German Artist“Life is Real,” , Lagbaja with “Never Far Away,” Naeto C, “U Know My P”, XPlastaz, “Nini Dhambi,” and so many more. We give huge respect and applaud their infusion of African fashions and fashion designers in their work. THANK YOU SO MUCH FOR HELPING ADVANCE THE AFRICAN CONTINENT & ITS PEOPLE WHEREVER THEY MAY BE FOUND THROUGH YOUR MUSIC AND FASHION.

CELEBRATION:Our review would be incomplete if we did not acknowledge the many celebrations across Africa that took place. Two key ones stood out in 2007. Ghana as it celebrated 50 years of independence incorporating fashion shows among many events. While Nigeria did the FELABRATION honoring the African and legendary musician Fela Kuti.

Thank you for your support! If we missed an important event in 2007, feel free to leave a comment and let us know what. Meanwhile, make no mistake about it. We have a clear sense of where the Ladybrille brand is headed. We are just taking our time to lay a rock solid ‘unbreakable’ foundation! It’s a wrap! See you in the ’08 & HAPPY NEW YEAR IN ADVANCE!