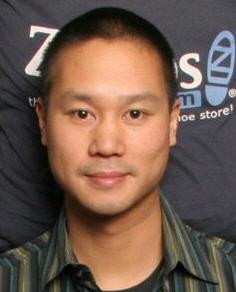 Tony Hsieh, CEO Zappos, appears to be convinced happiness is a serious problem, at least among today’s entrepreneurs. It might be the basis for why he delivered a keynote speech titled, “Delivering Happiness,” to TIE CON 2009 mostly entrepreneur attendees on May 16th, 2009 at the Santa Clara Convention Center in Silicon Valley, California.

Hsieh made it unequivocally clear that entrepreneurs can build a brand that matters while being both happy and successful. As one of the entrepreneurs listening to him, I didn’t know whether to believe him. Half the time it appears idealistic to think you can build a brand “that matters,” make money and be happy. I found myself asking quite often, “is this guy for real” until I heard him make what was, to me, a compelling case with his own personal story.

Hsieh was a student in college about 1994-1995 when he began operating a pizza shop. Along the way as he continued operations, he became friends with his #1 loyal customer, Alfred Lin, an avid pizza lover who took to purchasing large Pepperoni Pizzas from Hsieh, routinely. Unbeknown to Tony, Alfred was reselling the large pizzas he purchased from Hsieh upstairs in his dormitory, by the slice. Alfred, needless to say, is now the COO/CFO of Zappos. But, I digress . . .back to the story.

After college, Hsieh began a business called Link Exchange [LE]. For Hsieh, however, in focusing mostly on the bottom line at LE, he got to a point where he hated getting up in the morning to go to work. His bottom line attitude had caused him to compromise his values and hire people who made the workplace . . . you guessed right, an unhappy place. “I thought to myself, if I was feeling this way about getting out of bed to go to work as a founder, how were my employees feeling?” explained Hsieh. Two years after establishing LE, Hsieh sold it to Microsoft for $265million dollars.

By 1999 Hsieh was ready for a new venture. He established Venture Frogs, LLC an angel investment fund which would later fund Zappos. Of all the investments by Venture Frogs at the time, Zappos was the most promising. A year later, Hsieh joined Zappos as CEO and quickly set out to establish his ideal company, one he could look forward to going to, everyday. He placed great emphasis on a work environment whose core values encompassed “WOWing” every customer, building a positive and family spirit, growth and doing more with less. Also, in his commitment to “wow every customer,” Hsieh/Zappos established a 24/7 1-800 number on every page, free shipping, free return shipping and a 365 day return policy.

“Everyone regardless whether they are lawyers or accountants, if they work for Zappos, must go through a five weeks course of culture, core values, customer service, warehouse training,” explained Hsieh. For Hsieh, this training is a way to emphasize in the minds of employees the critical importance of customer service.

“People may not exactly remember what you did or said but they will always remember how you made them feel.” Yes indeed. Today, under Hsieh’s leadership and philosophy, Zappos now grosses over a $1billion in sales from a little over $1million when he joined Zappos in 2000.

“Wow! I thought, I can build a brand that matters and be successful?” I’ve always believed it but at times I wondered if I was too idealistic for my own good. Hsieh must have read my mind because he began urging the now mesmerized entrepreneurs to think about implementing Zappos principles in their businesses. He explained that a company’s core values need not be a replica of Zappos but it should be spelt out and there should be a strong commitment to it.

He also gave seven tips on building brands that matter: a) You decide to do so; 2) figure out the values and culture of both you and your company. Be prepared to make sure they are both in alignment with each other; 3) commit to transparency; 4) have a vision and chase the vision NOT the money; 5) build a relationship. Truly be genuine and interested in people not “what they can do for you!” 6) build your team [hire slowly, fire quickly], and 7) think long term.

Hsieh finished his speech urging entrepreneurs to take a step back and ask the fundamental question, “What is my goal in life.” Regardless of your stated goal, for Hsieh, it leads to one conclusion: I want to be happy! If you want to be happy, then how do you define happiness? Happiness, he explained, can be divided into three broad categories: a) Rock Star- people who experience this kind of happiness are always chasing the next high; b) Engagement- these kinds of persons always have to be engaged/involved in something to feel happy; and c) Meaning/higher purpose—persons who experience this kind of happiness are part of something bigger than themselves. The last definition of happiness he suggested was the type of happiness to strive for it a much longer lasting effect.

He must have struck a chord with many, not just me, because he received a standing ovation after the conclusion of his speech.

Africa Retail, Bringing the World of Shopping to Your Fingertips!