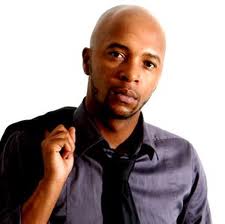 (November 2012) – Popular musician, TV presenter and Poet Stoan Seate has been announced as the face of a new counter-xenophobia campaign that calls on the South African public to enter a poetry competition about migration.

The campaign was launched (the week of November 15th, 2012) by the International Organization for Migration (IOM), United Nations High Commissioner for Refugees (UNHCR) and the City of Johannesburg, and will run through December 18, which is International Migrants Day.

A Facebook page and special I AM A MIGRANT websitehas also been launched, where the public can enter their poems on the subject: “I Am a Migrant Too”. Entry forms can also be collected from IOM offices in Pretoria, the City of Johannesburg Migrant HELPDESK, and the UNIC library in Pretoria. The competition closes on November 30.

Stoan will lead IOM’s search for entries throughout the country, and the best poems will be published in a book. He will also hand over prizes to the winners, including an iPad and iPhone.

“This campaign will help to promote peace and diversity by enabling South African communities to recognize that we all are or we have been migrants at some point, or that we are related to migrants,” he says.

“Whether I migrated from the Limpopo to Gauteng to look for work, or from another country to South Africa fleeing conflict or in search of a better life, or I fled into exile during Apartheid to fight for freedom, or sent my children overseas to study, you are, we are and ‘I Am a Migrant Too,’ elaborates Acting Chief of Mission for IOM in South Africa Dr Erick Ventura.

“Ubuntu has no nationality, Ubuntu has no borders. We all have a shared responsibility to respect each other’s human rights irrespective of where we come from. In fact, we all migrate, and as such are contributing to the global economy and to global cultural diversity,” says Ventura.

“We are all migrants and migration concerns all States. How many of us live today in the city of birth of our four grandparents? Not many. We are all children, grandchildren or great-grandchildren of migrants. Rare are those who have settled in one and the same place for numerous generations,” says UN Special Rapporteur on the Human Rights of Migrants François Crépeau.