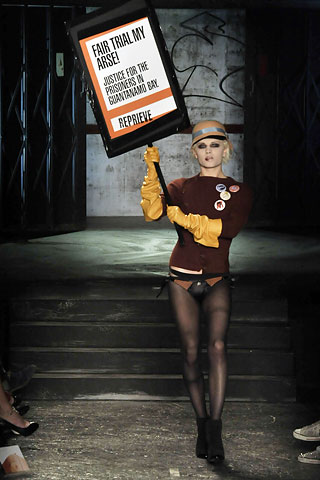 London Fashion Week ended this past Friday, February 15th, 2008. The legendary Dame Vivienne Westwood showed her collection in all its glory laced with her elegant yet rebellious streak. Particularly rebellious, this year, was the loud political message she sent on the runway, “FAIR TRIAL MY ARSE! JUSTICE FOR THE PRISONERS IN GUANTANOMO BAY. REPRIEVE.” Last year, I had the privilege of interviewing the designer in a one on one session, as well as listened to her speak to students at the Fashion Institute of Design and Merchandising, [FIDM]. Here’s the article I wrote about her last year, republished here just for you! Get to know this intriguing fashion politico legend.
__________________________________________________________________
“I never wanted to be a fashion designer. I was too intellectually inclined,” said reknowned British Designer Vivienne Westwood, in the auditorium, at San Francisco’s Academy of Art University where she was honored, on March 4th, 2007, with a doctorate degree for her contribution to the fashion industry. After receiving her degree from President Elisa Stephens and Executive Director for the School of Fashion, Gladys Perint Palmer, Westwood began fielding questions from the mostly student audience. In answering the first question posed by Palmer on who Westwood would choose to carry on the operations of her business, the sixty six [66] year old Westwood answered, “my husband who is twenty-five years younger than I.” Westwood’s response was only a quick glimpse into her non-conformist role and viewpoint in the fashion industry.

Thirty six years ago, Westwood was the pioneer of 50s inspired punk rock clothing even before “Rock n Roll” became mainstream; designing for the Sex Pistols. “[I]t was an incredible heroic attempt against the establishment,” said Westwood. “We were so disgusted with the way the world was so cruel [and] [w]ith the older generation who had allowed this to happen.” In “an attempt to see if [she] could destroy and go against the establishment,” Westwood, by the 70s, began operating a shop in Chelsea, London. Opting for fabrics such as leather, latex, nylon, rubber and spandex, she sold extreme and controversial apparels including bondage and fetish designs, t-shirts with slogans and pornographic images inscribed on them and 20 inch stilettos/platforms. By the 80s, the rebel on a mission to “destroy the establishment” took to London’s fashion runway. Her collections pushed the envelope on sex, sexual identity and incorporated youths and street culture.

“I don’t necessarily think the same [w]ay,” said the now mature designer. “I later changed my mind and said it has to be more than destroy the establishment.” In changing her mind, Westwood, it appears, channeled her very avant garde energy by researching historic fashion eras and tuning into understanding what women want. By the 90s, it was clear that while she remained a non-conformist, she understood the need for a balanced viewpoint which paid attention to fit, design details and creative intelligence.

By the same 90s, Westwood had redefined her style. She maintained her avant garde edge but presented it in a sexy, refined and modernistic reconstruction of historic fashions such as corsets and crinolines; infusing what would be her signature style of British fabrics such as tweeds and tartans. From disheveled, extreme and rebellious looks that was synonymous with her socio-political stance, Westwood has transitioned to womanly yet non-conformist elegance. “We are all being trained to be consumers. There is no choice at all. The dream of the business person is to sell one product forever and ever. [The] [result] is everyone looks so horrible, miserable, bored [and] stuffy,” lamented Westwood as to the current state of fashion and her determination to give women a viewpoint that goes “against the consumer” mentality with her designs.

While Westwood has traded a total focus on youth culture and rebellion for mature elegance that embraces individuality, design technique and detail, she still remains a designer who mixes art, activism and fashion together. In 2005, she collaborated with British Civil Rights Group, Liberty, speak against the government’s seemingly “draconian” anti-terrorist laws. Westwood launched exclusive limited baby t-shirts and T-shirts with inscribed slogans stating, “I AM NOT A TERRORIST, please don’t arrest me.” “People are being imprisoned and the elected government has become tyrants who can imprison people without trial and it is just sad,” said Westwood to [Ladybrille] in her luncheon just before the ceremony in the Academy of Art’s Auditorium. “It was in 1215 that England said a tyrant is not able to take somebody, put them in jail and not tell them why,” explained Westwood. “Under this excuse for “terrorism,” they are doing this and making this false equation that somehow, if you object to them doing that, you support the idea of being bombed.” The ever rebellious designer adds, “It has nothing to do with democracy does it? We have to always fight for justice before the law.”