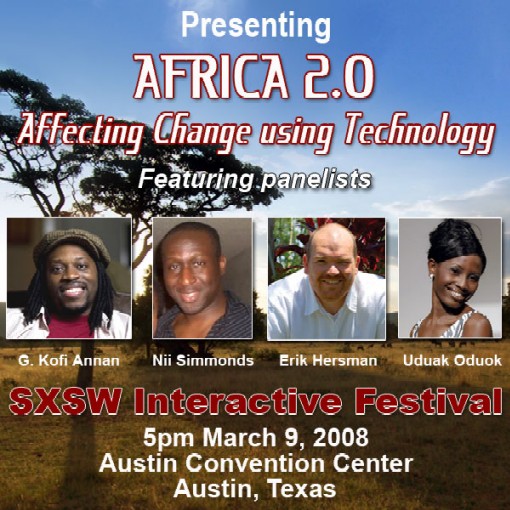 NY, NY – February 18, 2008 – How do you find sustainable solutions to Africa’s problems? Using technology that’s how. While the traditional media focuses on the conflict and failures on the African continent, there is a growing number of entrepreneurs who are using technological tools to change what is happening there. As evidenced in the ongoing conflict in Kenya, technologically savvy Africans are taking matters into their own hands and using inventive strategies to affect change. On March 9, 2008 at 5pm history will be made as entrepreneurs and thought leaders gather for the panel Africa 2.0: Affecting Change using Technology during the South by Southwest (SXSW) Interactive Festival in Austin, Texas.

Every year, the SXSW Conferences & Festivals bring together the top film, interactive and music industry leaders, established and fresh breakthrough artists, filmmakers, bloggers, decision-makers and the dynamic audiences that support them all. With the inclusion of the Africa 2.0 panel the 2008 SXSW Interactive conference will continue to spotlight the most important topics in the technology and interactive industries. As the only Africa-focused panel on SXSW Interactive’s 2008 schedule, the eagerly anticipated panel will be the focus of a conversation about how blogs, social networks, digital media and mobile technology are being used by businesses and citizens – both African and foreign – to affect change in Africa. The panel of experts will discuss adoption of mobile technology,community activism online, and the impact of digital media on Africa’s entertainment industries.

The panel Africa 2.0: Affecting Change using Technology takes place at 5pm, March 9, 2008. It is a part of the 2008 SXSW Interactive Conference and Festival taking place at the Austin Convention Center in Austin, Texas.

About the panelists
G. Kofi Annan is an entrepreneur, strategist and author with a specialty in cross-cultural communications strategies. He is the principal at Annansi LLC, a product development consultancy that produces Annansi Clothing Co., an award-nominated Africa-inspired apparel
brand, and Annansi Chronicles, a syndicated African style and business trends blog currently ranked as one of the top 100 lifestyle blogs. Mr. Annan is on the board of directors of the African Film Commission and his award-nominated work has been recognized for re-branding Africa in popular culture and bridging the communications gap between Africa and the global community. His work on African culture, marketing, and branding has been featured in Entrepreneur Magazine, Reuters, BusinessWeek, Advertising Age, and Inc. Magazine among others.

Erik Hersman is a rising international technology influencer with a keen eye on the impact of Web 2.0 advancements in the U.S. with his finger on the pulse of technology innovation across Africa. He writes four different technology blogs including: http://www.whiteafrican.com/ , African
Signals, Realty Thoughts and Afrigadget, which has been called “The ‘Can Do’ Attitude Personified “ by Treehugger.com. Erik can be seen speaking around the world at recognized conferences including the TEDGlobal conference in Tanzania.

Uduak Oduok is the founder of Ladybrille, https://ladybrille.com/ , a fashion brand which through its media subsidiary, Ladybrille Blogazine, brings Africa’s sophisticated fashions and industry to Western consumers. Since its launch June 2007, Ladybrille has been featured in leading publications and blogs in Africa and the USA. As of January ’08, the Washington Flyer Magazine named Ladybrille as “one of the Magnificent 7 poised to be the next big thing nationwide.” The blogazine has also been nominated for “excellence and outstanding quality” for the 2008 Fabbies Fashion Blogs Awards. Uduak is also an Attorney, Model and Journalist and has been
published in numerous national and international magazines.

Nii Simmonds is a capitalist/entrepreneur who lives in the DC metro area. His blog, Nubian Cheetah seeks to inform those who have an interest in Africa’s sustainable development with regards to ICT, technology, business, and social entrepreneurship. Nii is also the
founder of NAFRICOM, a non-profit trade association for IT Software and Technology Services industry for Africa. Mr. Simmonds is also a Co-founder of Emerging ICT Group, a global ICT research, training, and advisory/consultancy. 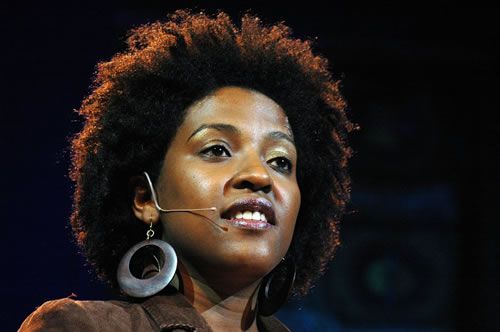