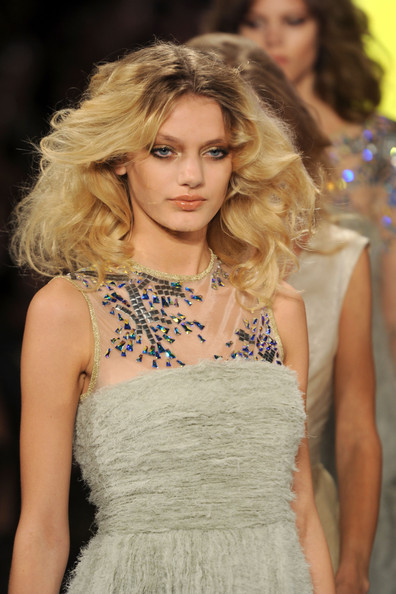 The Spring/Summer 2011 shows at Mercedes-Benz New York Fashion Week were . . . interesting.  While the Lincoln Center’s new surroundings were inspiring, some of the shows, well . . . left a bit to be desired.  Many designers turned to the classics opting not to push the envelope too much. While there was comfort in the familiar, it was exciting how some up-and-comers challenged our thinking and presented something new.  As in the past three to four seasons, the industry has suffered alongside the rest of us in this economy trying to find a happy medium between conservative frugality and cautious optimism.  In the midst of this struggle, we celebrate some of the season’s winners:

Korto Momolu—As we learned on season 5 of Project Runway, Momolu is a master tailor.  The amazing way her clothes hug a woman’s every curve, even if she has a few more curves than the lanky models, was apparent.  With her eye on landing her line in a store near you, it is obvious she has the every woman in mind.  This goal did not compromise her creativity.  Vibrant hues, fanciful patterns, and fluttery layering were on point expressing her inspiration: birds and flight.  She winks at the 70’s, staying on trend, while keeping things fresh.  Our fearless leader, Editor-in-Chief Uduak Oduok, was as proud as a peacock as she donned Momolu’s show stopping floor length gown in canary while hosting the 5th annual Nigerian Entertainment Awards.  Kudos, Korto!

Tracy Reese: This season the sexy bohemian got urbanized a bit. The collection projects an image of an impeccable jet setter.  Reese’s inspiration was “the dream of glamorous travel and immersing one’s self in a new and exotic environment”; she succeeded in taking us all there.  Like many shows this season, Reese referenced the disco era but distanced herself from the pack with the introduction of earthy, floral maxi-dresses paired with brown and black leather diamond-shaped bodices cut out craftily along the ribcage and around the back.  Her use of lace, cut outs, and sheer fabrics add a hint of sexiness without trying too hard.  Trend alert: Barely-there makeup was accentuated by round, sometimes rose-colored eyewear.  Think John Lennon on steroids.  Many models sported floppy, small- and wide-brimmed hats in suede or leather adding another throwback touch to a ladylike and modern collection.

Ports 1961 for a solid, wearable collection.  Fiona Cibani made a notable use of color in this collection inspired by desert plains.  We loved the infusion of magenta and emerald green for consistent pops of color.  This show fell shy of expectations but was a fine first effort for Fiona after sister, Tia Cibani, designer from 2006-2010, stepped down.  Standout: A grey floor-length bandeau dress of deconstructed chiffon with one sheer sleeve that poured into a one-shouldered neckline from front to back.  While nice in person, it photographed beautifully and will likely grace a red carped some day soon.  Also, we spied models that appear to have had a meal at some point in their lives as well as one with *gasp* muscles!  It was an amazing sight and one that reminds us that beauty comes in many packages.

Bensoni: This show was a breath of fresh air.  The designers’ use of color and pattern was youthful and sophisticated. A favorite from the collection was a maxi dress with a wide strapped top in a fish scale pattern, and a delicate horizontal striped lower half.  The mash-up of patterns was masterful, and the slim incision in the top from under the bust to the skinny belt that separated the northern and southern hemispheres of the dress achieved sexiness without overdoing it.  The brand also gets snaps for its use of a bevy of beauties from every corner of the world to represent its vision.

Malandrino: Catherine Malandrino scored high marks for her creative use of show space. Models were perched on solid pillars in the open air of the Grand Promenade outside of Avery Fisher Hall at high noon.  The literally statuesque presentation was a clever way to amp up the drama of the designer’s voluminous maxi skirts and dresses.  Key pieces from this collection included tops and dresses with necklines embellished by woven leather macramé and funky gladiator sandals that landed just above the knee.  A most interesting piece from the collection was the belted harem short, which was strangely flattering.