Home / News / The Hypocrisy! Dutch Magazine Calls Rihanna The “NiggaBitch” and the Black Community Gets Angry, What For?
Share 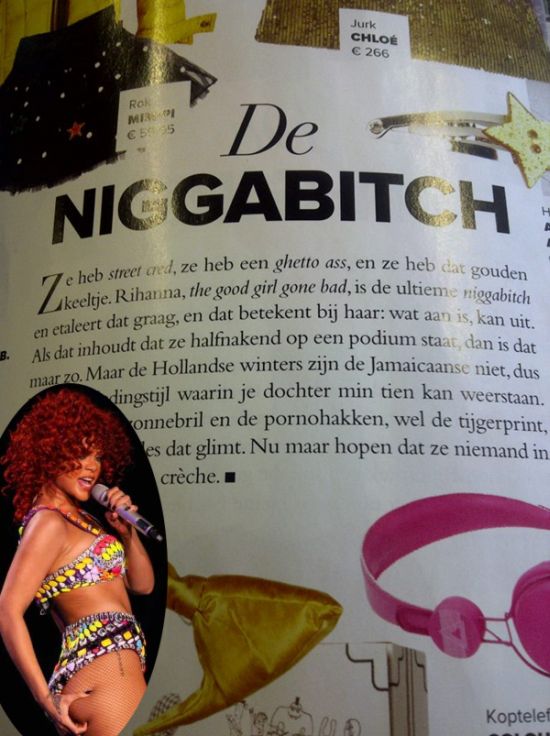 “She has street cred, she has a ghetto a** and she has a golden throat. Rihanna, the good girl gone bad, is the ultimate nigga bitch and displays that gladly, and for her that means: what’s on can come off. If that means she’ll be on stage half naked, then so be it. But Dutch winters aren’t like Jamaican ones, so pick a clothing style in which your daughter can resist minus ten. No to the big sunglasses and the pornheels, and yes to the tiger print, pink shizzle and everything that glitters. Now let’s hope she won’t beat anybody up at daycare.” -Jackie Magazine

Rihanna cursed the Magazine out on her Twitter page:

@evajackie I hope u can read English, because your magazine is a poor representation of the evolution of human rights! I find you disrespectful, and rather desperate!! You ran out of legit, civilized information to print! There are 1000′s of Dutch girls who would love to be recognized for their contributions to your country, you could have given them an article. Instead, u paid to print one degrading an entire race! That’s your contribution to this world! To encourage segregation, to mislead the future leaders to act in the past!“You put two words together, with the intent of abasement, that made no sense…”N—A B—H”?!….Well with all respect, on behalf of my race, here are my two words for you…F–K YOU!!!” – Rihanna

After an outcry from Rihanna and the Black community, the Editor-in-Chief responded with:

First: thanks for all your responses. We are of course very fed up over this and especially very shocked. However I’m glad that we’re engaging in a dialogue on this page — not everybody does that. Thanks for this. Other than that I can be brief about this: this should have never happened.Period. While the author meant no harm — the title of the article was intended as a joke — it was a bad joke, to say the least. And that slipped through my, the editor-in-chief’s, fingers. Stupid, painful and sucks for all concerned. The author has been addressed on it, and now I can only ensure that these terms will no longer end up in the magazine. Furthermore I hope that you all believe there was absolutely no racist motive behind the choice of words. It was stupid, it was naive to think that this was an acceptable form of slang — you hear it all the time on tv and radio, then your idea of what is normal apparently shifts — but it was especially misguided: there was no malice behind it. We make our magazine with love, energy and enthusiasm, and it can sometimes happen that someone is out of line. And then you can only do one thing: apologize. And hope that others wish to accept it.

From the bottom of my heart I say it again: we never intended to offend anyone. And I mean that.

My response? What is there to be so angry about? I am not interested in being politically correct. I am interested in calling this as it is.

In recent times, Dr. Maya Angelou voiced her opposition to rapper Common’s use  of  “Nigga” in a collaboration they did together. She argued she had no notice her contribution would end up being merged with Common’s in such manner. Common justified his use and explained it was a generational difference and both parties can agree to disagree. Really? Common, are you serious? Some years ago, I recall watching the Oprah show. Jay-Z was on the show and at some point, the issue centered around the use  of the “N” word in hip-hop music. Jay-Z again justified the use of the “N” word in much the same way Common did. He saw no problems with saying “Nigga” as opposed to the word “Nigg*r” and concluded, just like Common, that Oprah and him can agree to disagree. Really, Jay-Z?

Raise your hands if you have also heard these justifications in your local communities from Black persons. Almost 20years ago when I returned to the USA from Nigeria, I recall my time in the 11th grade and specifically my US History class. In that class, I learned about African-American history and journey. I learned about the “N” word and its deeply rooted history and negative impact on the black community. The empathy I felt for such horrible slave history of which Africans on the continent were partly contributory, remains indescribable. Shockingly, since high school until now, I have heard and continue to hear the use of the “N” word by Blacks both in a commercial (entertainment) and non-commercial sense. Highly disturbing for me is the constant explanation by Blacks that there is a so called distinction. Like seriously? “For real?” I missed the memo.

Music is a deeply personal experience and its success usually means the consumer of such music incorporates it into his/her lifestyle. Successful artists and record labels have flooded the homes of  millions, worldwide, with music that includes  the “N” and “B” word  by Black hip-hop artists. Heard Nicki Minaj’s latest single? It is all about the bitches and the hoes. Anyway, in return, millions of fans around the world have soaked up every lyric, every beat and have emulated the fashion, lingo and things they deem “cool” or flatters them.

These artists and labels are so effective with their marketing and promotions strategies, the  world has bought into what they are selling i.e. “Nigga, Bitch, Hoes.” Do they have some great music, yes. Do they have music that predominantly use these derogatory terms towards women and an entire Black race? In the hip-hop genre, “yes.” Many young people across the globe now identify with hip-hop music and for many, calling each other or others “Nigaa” is simply no big deal. It is a term of endearment and affection. One that can be used to sell clothes in a feature in a magazine or push sales of more music.

In recent times, I challenged my own community (Nigerian and African community) to stop the use of the N word in African hip-hop music or at a very minimum, bleep the word out. I feel strongly that Africans, particularly, have no business using the N-word, whatever derivative form it may come.

Back to the Rihanna story. Should a magazine publish a headline “NiggaBitch” and article as some form of flattery to Rihanna?” The obvious answer is “NO!!!” However, when many in the Black community and those many look up to like Jay-Z, say the use of the “N” word albeit “Nigga”  is okay, what do you expect from a world and pop culture that adores them? I am having a hard time understanding this constant hypocrisy where the Black community including many who use the “N” word flare up in anger when non-Blacks use it. You don’t want people to call you derogatory names, don’t call yourself that! It is that simple. In a historical context it cannot be justified. If you say today’s 21st century society has taken the potency out of the “N” word, then you don’t get to choose who says it and how it should be said.  At the rate we are going, there will come a time where non-Blacks who use the “N” word will be completely unapologetic for such use. Oops, it is already happening.

This is ridiculously ridiculous, if there is any phrase like that out there. I am tired of the constant flare up by the same community that uses the word very liberally. The Black community has opened the floodgates and it is hard to control the damage at this point. As someone  I know put it best, “The “N” word will stop being used when Whites determine it is time to stop the use.”

Watch a Black basketball player be subjected to use of the “N” word as a tradition by her White teammates.

Watch the controversy over one of the emerging hip-hop artists using the “N” word.

KRS One on Nigga