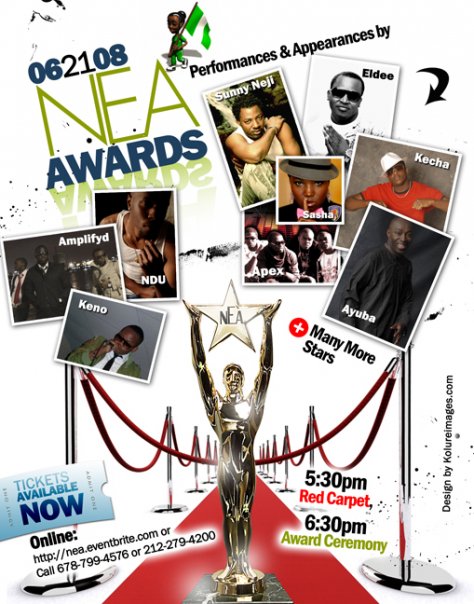 Happy happy Friday brilliant ones! The event we’ve all been waiting for is finally HERE. Saturday, June 21st, 2008, the 2008 NEA Awards kicks off at 5:30pm with the red carpet and later with a show that promises to be super duper exciting! We can’t wait to see what everyone is wearing, who wins the numerous awards in the much coveted spots and of course party like rock stars, “totally dude!” [had to add that]. We gave you a teaser on what to expect, earlier this week, at the 2008 NEA Awards in our interview with NEA President, Tope Esan. Read all about it HERE.

As of today, we have a confirmed list of all of the celebs that will be at the event and boy is it a star studded red carpet! We can’t possibly list all as it is quite long. However, here are samples of the accomplished celebs that will be at the 2008 NEA Awards: Agbani Darego –Most Beautiful Girl in Nigeria and Miss World 2001, Ben Bruce–Chairman Silverbird Group, Bola Atta– Editor in Chief of True Love Magazine, Chichi Dike–Executive Director of Miss Nigeria in America Beauty Pageant, Ebbe Bassey –Actress featured on Law and Order TV show – Special Victims Unit, our very own Ladybrille Woman of the Month for November, Estella Ogbonna–Principal of Estella Couture, Lola Ogunnaike, CNN correspondent, Nana Eyeson, Essence Magazine, Supermodel Oluchi, Adama—Recording Artist, Banky W–Recording Artist, Gbenga Akinnagbe—Actor (HBO Series “The Wire”), Iceberg Slim–Recording Artist, Olu Jacobs– Nollywood’s A-list Actor and so many more! The event will be hosted by UK’s and now Hollywood’s Razaaq Adoti–Actor [Amistad, Black Hawk Down].

In addition, fans and fans to be, get ready to be WOWED by some spectacular performances from names like Amplifyd Crew, Eldee, Keno, Sasha, Sunny Neji, DJ Dee Money, DJ Humility and DJ Neptune.

Some of Africa’s well known media outlets: Afrovision TV, Nigeria International, Ovation Media, Prime Time – TV, Silverbird Entertainment – TV & Radio and a long list of numerous media outlets within the USA, Europe and Africa, will be there capturing the glitz and glamour of the 2008 NEA Awards.

You haven’t bought your tickets? “What?” ‘What are you waiting for?!” Step on it and we shall see you in NYC at the star studded 2008 NEA Awards!