We are glad we at least got one prediction right. Yay! Not only did Nigeria’s D’Banj win “Artist of the Year,” he also won “Best Male.” Congrats!

Other winners included Alicia Keys–Best R & B, Nigeria’s 9ice—Best Hip-Hop Artist, Nigeria’s P-Square—Best Group, South Africa’s Jozi--Best live Performer and South Africa’s Seether—Best Alternative Group. The event paid tribute to MAMA Africa, Miriam Makeba, who just passed. Ghana’s Samini, who was also up for an award in Best Live Performer category, made it clear he was unhappy with South Africa’s Jozi as the winner. According to him, live performer means exactly that “live,” which he implied the group did not meet the criteria. MTV made its selection of winners through fans who texted the network all day to choose their ultimate stars.

Fans were also treated to duo performances by their favorite artists. For example, South Africa’s HHP and Nigeria’s Asa performed while South Africa’s Casette, Kenya’s Jua Cali, Nigeria’s Ikechukwu and Naeto C collaborated to bring down the house. Special congrats to 9ice as he was up against America’s Lil Wayne and The Game yet he won Best Hip-hop. That’s one step closer to bringing home the grammys as he promises in his song, “Street Credibility.”The show will air on November 29th, 2008 on MTV channels across the globe. For our prior 2008 MTV Africa Music Awards [MAMA] winners and pictures, click here.

All photos by Dan Kitwood/Getty Images 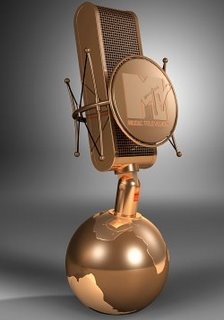 Ms. Kelly Rowland handling it as she announces an award winner

Ms. Alicia Keys who could not make it thanking her fans for the award

Catch Tiwa Savage and Waje LIVE at De Marquee on Sunday May 29th, 2011