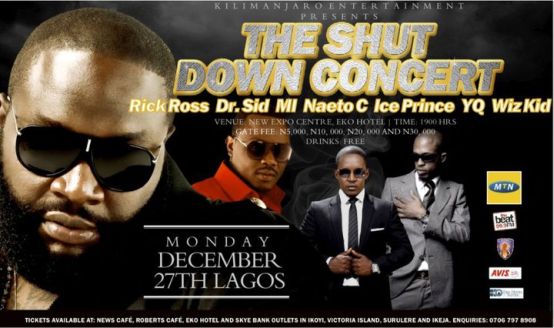 On December 27th, 2010, Rick Ross alongside Nigerian rappers Naeto C and MI intend to shutdown Lagos, Nigeria with brilliant performances for their fans and the city. For Ladybrille readers headed to Lagos, it seems like an event definitely worth checking out. Check out the full scoop and event details in press release and flyer.
________________________
On Dec 27, 2010 all roads will lead to the Eko Hotel, Lagos, where Kilimanajro Entertainment in association with Storm 360 are organising the “Lagos Shut Down Concert” with Rick Ross in Nigeria.

Kilimanjaro Entertainment, the outfit responsible for a number of top level concerts in the earlier part of the decade, with Boys 2 Men, Joe, Sean Paul being just some of the major talents they successfully delivered in major concerts return to the game with this show which is destined to be one of the best shows this season in Nigeria.

This concert is headlined by the Teflon Don himself – Rick Ross – ably supported by some of Naija’s finest – two of the finest emcee’s Africa has to offer back him up with MI locked and loaded and Naeto Super C primed to explode. Also on the bill are Dr. Sid who will bring his infectious hits to the table, “Oleku” crooner himself, Ice Prince, YQ and the emerging young superstar Whiz Kid. Also on the bill is Iyanya – the 1st MTN
Project Fame West Africa winner performing his new release “I’m the One”.

Kilimanjaro Entertainment is using this show as a foretaste of what to expect in 2011. As always, the company is geared to deliver World Class Entertainment based on their reputation already built over time.

In 2010, Rick Ross was voted Man of the Year by The Source Magazine and released one of the most critically acclaimed albums. From mix tapes to the charts, he has been dominant all year and Kilimanjaro is proud to deliver his first FULL concert in Nigeria.

Expect a World Class Show and Expect to be fully entertained. There will be some surprises in production delivery and it is confirmed that all is now set for this event.

Storm 360 will be co-producing this event. According to its CEO Obi Asika, “The year 2011 will be the year of collaborations, starting right here.”