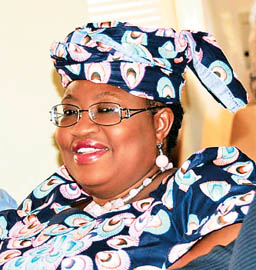 “ABUJA (Reuters) – World Bank managing director Ngozi Okonjo-Iweala laid out her vision for the Nigerian economy on Wednesday, pledging she would create jobs and ensure the country “lives within its means” if approved as a cabinet minister.

President Goodluck Jonathan has asked Okonjo-Iweala, a respected former finance minister who helped negotiate debt relief in 2005, to return to her old position with broad powers over economic management, government sources have said.

She appeared before the Senate on Wednesday to be grilled by lawmakers over what she would do as a minister, part of the process of approving Jonathan’s cabinet nominees.

“Can we run a budget that is not negative? Absolutely. We can do it, we have done it. We have been able in the past. . .”