In anticipation of the 51st Annual Grammy Awards to be held on February 8th, 2009, a specially-invited crowd of tastemakers flocked to Los Angeles’ new green urban oasis, SmogShoppe, on February 4th to witness R&B singer and songwriter Keri Hilson rock it out at the Lexus Listening Lounge Pre-Grammy Party. Kawanna Brown, Magic Johnson Enterprises’ COO, was presented with Lexus’ Pursuit of Perfection Award, which recognizes African-American women whose work exemplifies extraordinary achievements in the fields of business and entertainment.

The celebration kicked off with red carpet arrivals, as guests were greeted by a lavishly catered cocktail reception in the courtyard, where they enjoyed themselves before the main event. The atmosphere of the venue was eco-chic. A 100% solar-powered haven, SmogShoppe featured chic vintage furnishings and stylish recycled and sustainable features. Adding to the ambience, and in keeping with Lexus’ commitment to the environment, Lexus Hybrid vehicles were also on display.

Joining Hilson and Brown on the red carpet were actress Vanessa A. Williams, Tina Atkins and Erica Atkins of the gospel duo Mary Mary, R&B singers Tank and Teairra Marí, and actor James Black.After the award presentation, Hilson took to the stage, and the eagerly-waiting guests were treated to a high-energy musical performance featuring her well-known hits as well as new songs from her upcoming debut album, “In a Perfect World.”

LADYBRILLE.COM briefly caught up with Hilson after her electrifying performance, and she shared her thoughts with us about her highly-anticipated album as well as her personal style.

LADYBRILLE.COM: I know you started out as a performing artist from the beginning, but you were most known in your career prior to your current projects as being an excellent songwriter for a lot of other talented artists. How does it feel now that you’re being seen for what you originally started out to do, which is to be an artist on your own? How does it feel to be finally here, and your album is about to be released, and you’ve been getting such a warm reception from the fans and the music community?
Keri Hilson: It’s been great. So far, the transition has been very easy for me, because [like you said] being an artist was always my first dream. Honestly, I never expected that songwriting would bring me back to the artist thing. It is what I wanted to happen, but it’s not what I expected. I’m a realist, and I knew that as long as I was working that I would be successful; as long as I was working as hard as I was working, I would be successful. I never even would have guessed that songwriting, for me, would take off as fast or as far as it did, but it did, and I’m proud of myself.

LADYBRILLE.COM: For the event tonight, with Lexus hosting, the theme is “arriving in style,” and one of the reasons you were chosen as an artist to perform tonight because you’ve finally “arrived” as an artist, and you’ve arrived in style. How do you feel about that?
Keri Hilson: Well, I guess I try to be stylish, and I guess that’s a good thing.[smiles]. And style really is just confidence, so if they chose me for the style reason, I’m flattered and honored. It was a good collaboration. I’ve done a couple shows with Lexus, so it’s a good collaboration.

LADYBRILLE.COM: Your sense of style is refreshing. How would you describe your personal style?
Keri Hilson: I think I’m always a good mix of masculine and feminine, like soft and rough. I mean, that is who I am. I’m kind of a girlie-girl now, but I grew up a tomboy. I swam for twelve years, competed for Georgia in the Junior Nationals in swimming. Then I played basketball; two years best offensive and senior MVP in my high school career. So that is very much a part of me. I’m a tennis shoe freak. I love everything from my tomboy days. I care less about a lot of things that the average woman cares about. But, my style reflects that, and I think it’s a good mix of womanhood and my childhood growing up as a tomboy; always easygoing, always comfortable. Comfort over anything else, absolutely. If I’m not comfortable in it, I won’t put it on. That means I won’t be confident.

LADYBRILLE.COM: Ladybrille.com as a brand is known as “Where the West Meets Today’s African Fashion Industry.” How do you feel about Africa’s influence on fashion, and have you been to Africa? Would you like to perform someday in Africa?
Keri Hilson: Absolutely, I would love to go to Africa! My sister has been to Capetown and Johannesburg. She actually taught in the schools. I don’t know much about African fashion and how it may have influenced fashion here or anywhere, but I would be interested to go and see! That would be something I would absolutely love to do.

LADYBRILLE.COM: Excellent! Thank you very much.
Keri Hilson: Thank you! 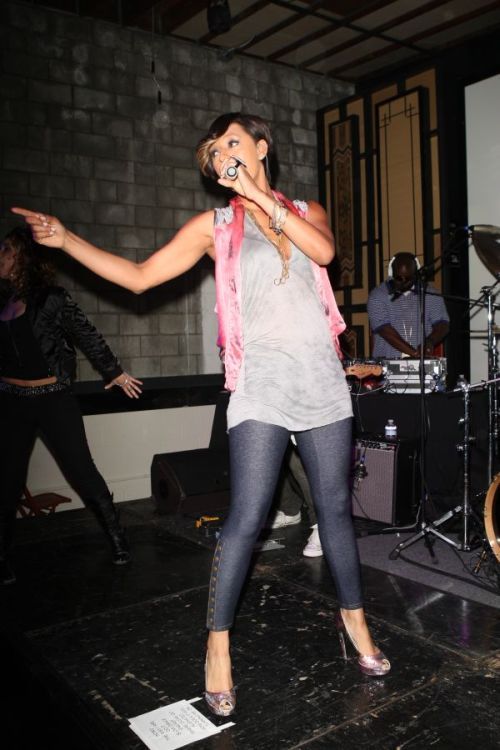