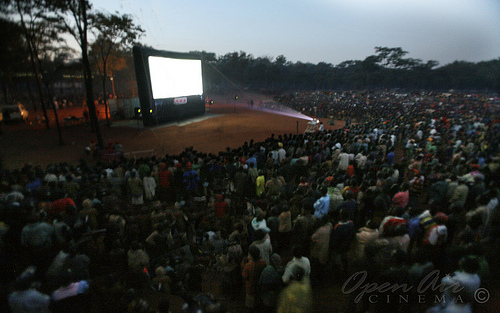 What if African filmmakers in Africa could bypass screening their movies in the only theater or two located in their countries which insist on squeezing out local flavors for the benefit of American movies? What if the screening was held in huge soccer fields, stadiums or any open space and attracts over 10,000 or more? What if filmmakers charge at a minimum $1 so the average African could attend the screenings delighting their eyes, ears, and minds in the magic of cinema? It would be fantastic wouldn’t it?

That is exactly what is happening as the phenomenon that is ‘mobile cinema’ gains momentum across the continent. Mobile cinemas are not new in Africa. In fact, Non-Governmental Organizations have used them in the past to educate and entertain large audiences in Africa. The challenge in the past, however, was that these NGOs used outdated equipments and as a result were limited in number they could reach. Today, mobile cinemas are more in tune with the times. They are lighter, easy to transport and flexible allowing both Africa’s NGOs and now filmmakers to create a revolution in the thoughts and minds of many across the continent.

LADYBRILLE.com sat with President Stuart Farmer of Open Air Cinema Inc., one of the more globally progressive brands headquartered in the USA, which subsidizes NGOs by providing inflatable movie screens for remote large-scale viewing of films and multimedia in Africa for a brief discussion on the mobile cinema phenomenon, and specifically their product and how it works. Farmer’s Open Air Cinema subsidizes NGOs in Africa by providing inflatable movie screens for large-scale screenings of films and multimedia in Africa. They have and continue to work with NGOs such as Film Aid International, Shine Global and Fine Films and the Rwanda Cinema Center to bring the magic of cinema to millions in Africa.

LADYBRILLE.com: How did Open Air Cinema in Africa come about for you?
Farmer: Well [Open Air Cinema] has always been very community oriented. We cinema outside and the reason is really to get everyone together and to kind of enjoy a common story together, outside. My background, I have had a lot of exposure traveling the world and late one evening I was just traveling and I found a small NGO that was doing screenings in UN refugee camps. They were using very small screens with kind of archaic equipment, and of course our specialty is large scale, you know, kind of eye popping really blow your audience away audio-visual presentations. So I thought we can definitely help this people out. So that is when we started helping different NGO’s in Africa.

I personally had gone over to one of them that we had donated three systems to UN refugee camps and we saw just the magnitude and the power of cinema. In America we have thousands of distractions and many different ways to entertain. But over there at least using technology, they don’t have many options. So this really had a very powerful effect and it really draws lots of people together. In fact, we actually had 15,000 people in one night watching [in Rwanda].

LADYBRILLE.com: The idea came about so you took it from manufacturing all the way to market and you decided you could expand, even in the USA, so we here can use it with our family and friends in our backyards?
Farmer: Yes. Our own business started here in the USA and we’ve been doing it longer in the USA than we have in Africa. But we just saw that each culture has its own needs for it and both are very happy with it.

LADYBRILLE.com: Assume I am a filmmaker in Africa . . . and I don’t necessarily want my audience to come to a theater. I want to screen my film all over the continent and have as many attend. How would I use your product?
Farmer: Well, exactly what we can help out with. All of our big screens, sounds, projectors are another form of distribution for filmmakers. It allows them to take these cinematic sized screens to [various locations.] You can load it into a Land Rover and everything you need can fit into that Land Rover for an audience of 10,000 people. You can use it at a stadium, large open soccer field, anyplace in the village or a township. You can screen it using DVDs, hard drives depending on what type of media format you have.

A person like Eric Kebera [acclaimed Rwandan filmaker], he is fundamentally a filmmaker but he is an example of a business man who is using open air cinema to make a living but also contributing to his country’s culture. He shows his films and films of others and he is consistently atrracting thousands of people a night.

LADYBRILLE.com: Yeah and I’d be curious for soccer games which everyone loves in Africa. If you can’t be at the stadium to experience it live, you can do that subsequently with this open air cinema [phenomenon].
Farmer: They do that now. The Rwandan government plays this pre-recorded games at the Stadium and a couple of thousands of people per night show up and they charge like a dollar.

LADYBRILLE.com: Gosh that is amazing! To really think how people can use this product and truly help themselves and communities. It is impressive. It is like the cellphone.

LADYBRILLE.com: On the use, you were saying. . .
Farmer: Yeah, you can load DVD resolutions onto IPODs and play really good looking movies off an IPOD.

LADYBRILLE.com: Off an IPOD attached to your equipment, right?
Farmer: Yeah. Of course you can do it off laptops. So, your whole evening is very simple. It is very compact equipment. Projectors have gotten a lot brighter, a lot smaller and less expensive. The same goes for speakers, they are much lighter, powerful and less expensive. [O]ur screens are so big and relative to their size very affordable, and so these filmmakers can use our inflatable outdoor cinematic equipment to show their films to their own people.

LADYBRILLE.com: So will this also apply to crusades? I recall growing up in Africa and the huge crusades that were often conducted by foreign ministers to spread the word of God. I just thought gosh this would be so ideal because there were always logistic problems sometimes in the screens they used. Is this the same application?
Farmer: Yeah. Anywhere you would like to use audio/visuals for large outdoor gatherings. The screens are often 8 to 9feet above the ground far above anyone’s head and then they could be 35ft tall. It’s got a high projection service that people can see from hundreds of feet away.

LADYBRILLE.com: Staying ahead of the competition and being innovative is always the name of the game. Who are your competitors and in terms of innovation, where do you forsee this technology going?
Farmer: There are several inflatable screen manufacturers. They’ve been around for sometime too. If you go to Walmart you would see Sima, Super Screen out of Colorado, Air Screen.

LADYBRILLE.com: What makes you stand out with [the] many doing it?
Farmer: We are the most globally oriented. We try to sell all around the world. Our product is manufactured within the United States. What’s different also is we have an events production background. We were doing 150 events or more per summer. We would do LA Film Festival and Tribeca. Those are one of the biggest outdoor film festivals in America.

LADYBRILLE.com: Of course.
Farmer: Sundance is of course very big but it is in the winter so we are not really involved with them. [laughs]. Basically we have that background and we know what level and quality required have a durable and functioning product with thousands of people watching, waiting, expecting. So we make a very powerful product that last for years. We came from that large events background and then moved into manufacturing. We no longer produce events for people anymore, hardly. We just teach people how to do it.

LADYBRILLE.com: I asked about innovation. Where do you see your product going innovatively in the nearest future?
Farmer: More affordable, better techniques and lighter materials. We got a 16ft screen which only weighs about 15 pounds, very light weight. So we are gonna push our screens to be even bigger and lighter weight.

LADYBRILLE.com: What is the logistics like in terms of shipping and handling and getting your products to filmmakers overseas?
Farmer: It is surprisingly easy. International shipping really does well. The pricing is not too bad and it is reliable. It is a fact we don’t have any inventories sitting overseas. We have trained an intern from Tanzania and he is prepared to help us manufacture screens in Africa so that we have screens sitting there that way we don’t have to worry about shipping costs. But that will be something we probably will start late next year.

LADYBRILLE.com: Thank you. I love the innovativeness of your product and I find it intriguing the many different ways people are using it in various cultures.
Farmer: Thank you. Thank you so much. 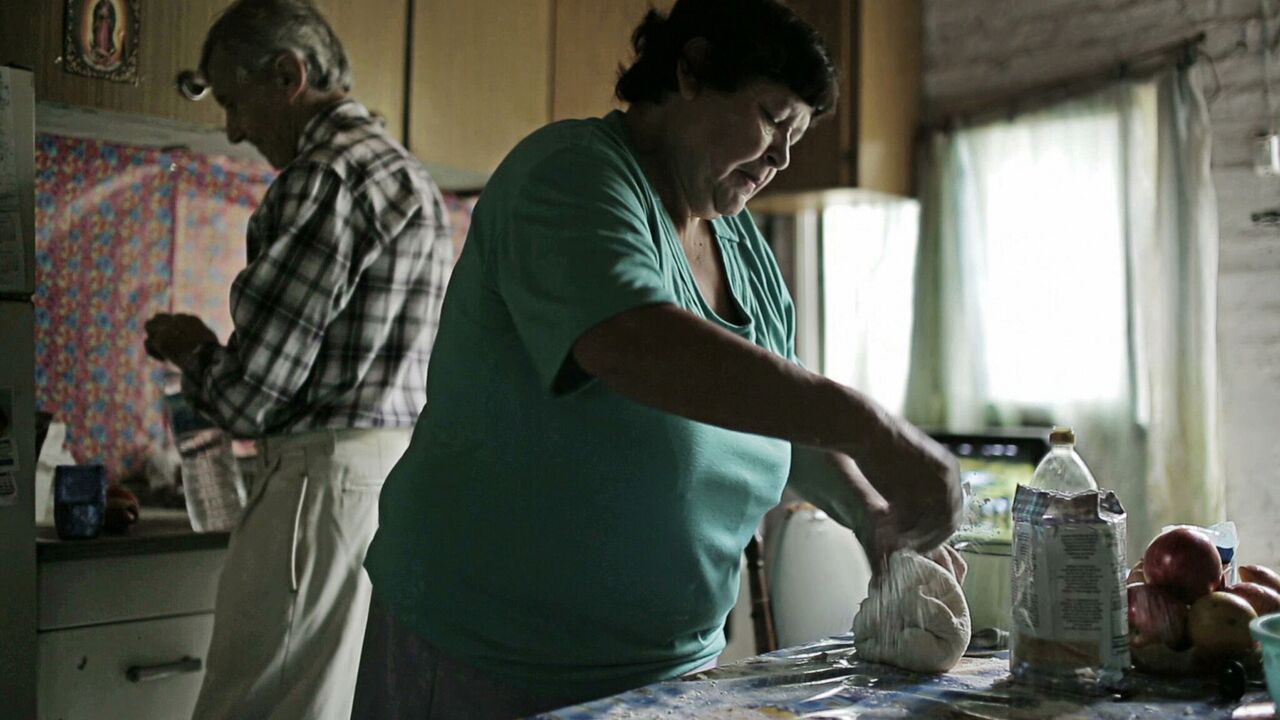