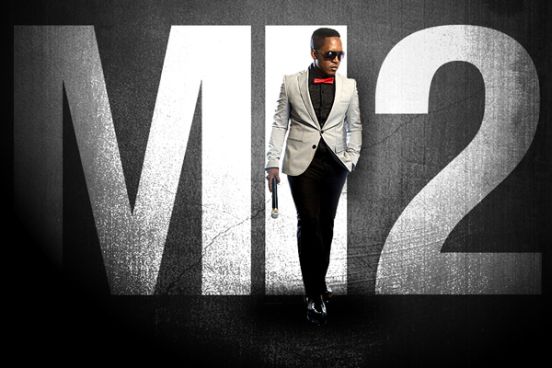 After almost two years of waiting, Nigeria’s critically acclaimed “hip-hop messiah” M.I (Mr. Incredible) releases his sophomore album MI 2. MI 2 begins with a track titled “Announcements” which is more of a short film that essentially re-introduces M.I to the world. The track has the right music film score and conjures up a theater feel with a voice-over asking all to switch off all “mobile” phones in the theater. The next track titled ‘Action Film’ continues with the short film but within seconds of introducing M.I, M.I hits the ground running  getting into music action. “Left (x6), left, right, left, right, ha! ladies and gentlemen, I am back. . . came back to set a new standard,” raps M.I.

Indeed. He does set the new standard and raises the bar for Nigeria/Africa’s music industry. Track 3 titled ‘Slow Down’ begins and you know MI is really serious and “going in” as they say in street slang terms when you are ready to dissect a song, job etc. MI2 covers the gamete with diverse genres and does it so well. On track 3, M.I delivers a slow version of what sounds to me like a Sean Kingston meets Sean Paul Dancehall accent as he flirts with his love interest. Who knew MI could “toast (flirt)”, as Nigerians would say, in a Nigerian-Jamaican accent. “Whaa gwan?”

Making sure no one confines him to the dancehall genre or confuse him to wanting to be a Rastafarian, M.I switches up his lyrical flow and beats, by taking on Nigeria’s traditional genre of music called ‘high-life.’ This genre typically appeals to a more mature crowd but in recent times has produced hip-life music greats, like Nigeria’s J-Martins and Timaya, that appeal to both young and old. The track, Track 4 titled ‘Number One ft. Flavor’ shows hip-hop can blend seamlessly with high-life. The sound is beautiful M.I is clearly not leaving any fan behind: old, young, Nigerian or otherwise. Track 5 ‘Anybody’ is a return to the short film concept sprinkled throughout the album. There is the flute and piano creating the right backdrop to showcase his lyrical prowess.

I feel like M.I anticipated I would spot the Timaya high-life influence. But in case I or anyone missed it, the next track, ‘Anybody’ explicitly features artist Timaya on it. While I want the ‘Anybody’ title to get a bit more creative, I appreciate how M.I effortlessly shows that he resides among the best of the best in Nigeria/Africa’s hip-hop music scene.

Picking up on I guess my post telepathic communications, the next track is indeed a showcase of M.I alongside the best of the best in Africa’s music scene, TuFace. M.I’s choice of title for the track ‘Nobody’ makes me wonder if he was also giving a nod to Nollywood (Nigeria’s film industry) with one liner titles that make it easy for the street marketers to easily pronounce? ‘Anybody’ and now, ‘Nobody?’ “Okay,” I think.

‘Nobody,’ however, illustrates and reminds me of the brilliant M.I I was introduced to, via his music, in 2008.

“Ask TuFace. It’s like toothpaste. Without your gist in their mouth, they get toothache,” he raps in his verses as TuFace sings the hook. “Just because say you no tie shoelace they carry your gist around like a suitcase. Ask Omotola, ask Genevieve. The kind of false things that people believe. If City people write, City people read until there is nothing real, all na weave. Ask Timaya, ask Wande Coal. They follow you bumper to bumper on a Sunday. . .” I am loving M.I’s references to Nollywood and Music stars and explaining the challenge of being a celebrity i.e. always in the lime light.

Taking gossip magazines on and also sharing the life of a celebrity in showbiz, M.I uses his next track ‘Beef’ to get out all the “hate” brought on, this time, from music industry people. “Beef” for our non-rap listening audience is essentially having issues or in Nigerian local dialect (Pidgin English) “wahala (problem)” with a colleague/persons in the industry. It is commonly used in rap music and is what rap wars are made of.

“See dem, see dem. They wanna beef me. Now that they see BET on my CV . . . my motto is do more talk less. Never get mad at another man’s success,” raps M.I showing his frustration with those who envy his success and seek to sabotage him. “So when people tryna make sure I chop (eat) less, I say no be (it’s not) your fault you are just jobless.” MI raps on a jazz beats and stays on point with the beat, rhymes and delivery. His next track stops “chewing the beef” and again transitions into a short film this time titled ‘Wild Wild West.’

The track is okay but not a highlight for me. As if to sense he might lose the interest of his audience on that track, M.I returns with a very nice surprise wrapped in track 9’s ‘My Head My Belle.’ Not conceding the global music audience to only Western musicians, M.I references heavy Spanish accentuation in his track. As I listen, I appreciate the concise and clear thought process that went into making an album with a diverse body of work for a diverse (and global) audience.

In ‘My Head O, My Belle’ I also hear what sounds like a Nigerian influenced derivative work of Mexican-American singer, songwriter and guitarist Ritchie Valen’s ‘La Bamba’ song. M.I really turns the beat on its head and adds a much softer touch on the acoustic guitar sounds used. The track finishes with a skit from Nigerian singer Waje who sounds more like a Los Angeles Valley girl that any listener of Nicki Minaj would relate to. The skit transitions to track 10, ‘One Naira ft. Waje.’ Naira is Nigeria’s currency.

On ‘One Naira,’ despite Waje’s strong vocals as a feature on the track, there is no confusion on whose album it is. M.I gives a poetic type performance reminding us a big part of rap is poetry. The track is about relationships and loyalty. Loyalty “whether na one Naira, or 1 million. Baby you got me,” loosely translated to mean whether you are rich or poor (one dollar vs one million dollars), you got me. I guess true love can be that loyal, right?

In any event, as I savor and focus on the lingering taste from ‘One Naira,’ M.I gives me another unexpected transition. While M.I hails from Jos, Northern Nigeria, he has not necessarily used his album to touch on socio-political/socio-economic issues. In all fairness, the Jos crisis the world came to know happened after the release of his freshman album, ‘Talk About It.” But, in MI2, it is a no holds bar. M.I delves into corruption, poor education, the Niger Delta crisis, shooting, looting, degrading of women and using women as sex objects, among other topics.

“When they gbongbonlo, u come dey gbangbanla. . . na so craze dey start.”

Don’t ask me what that means. It is just a catchy jibberish hook that says when you go crazy, I go crazier. The “gbongbonlo and gbangbala” give way to verses with deeper context and content that will most likely immediately connect with audiences whether they be in the ghettos of Compton, Los Angeles or Ajegunle, Lagos. As I listen, I am sure this song will be a big hit. I am mesmerized from the beginning to the end.

The transition into the next track in terms of the line up is, in my view, a bit off. From social issues M.I transitions to being the “Undisputed Champion.” Errr . . . didn’t see that coming. Nevertheless, the hook is simple, the lyrics are not trying too hard, he makes his point and moves on, quickly. The next song sort of attempts to do what his track ‘Jehovah’ did in his first album, ‘Talk About It.’ First, MI features an artist called Praise who sounds more like John Legend. Praise gives a powerful introduction. (Coincidentally), the instruments used on ‘Undisputed’ are more of claps from a praise worship session in church. The lyrics are empowering and encourage listeners to be ‘Epic,’ to be true to themselves, keep it real. The artist Praise really shines on the track, yet he does not steal the show from M.I. Praise hits the high octaves and really delivers the message of empowerment on a high note.

Track 14 goes into the credit/acknowledgment section of the album and having people say one thing about him they don’t like. I have never really seen this done before. On the one hand it could be seen as a lack of self confidence. But, on the other hand, it would take a very confident person who is in tune with self to ask people to say what they don’t like about him, record it and share it with the world. The people on the track revealed:

MI is “very absorbed,” “perfectionist to a fault,” “bossy,” “bullies everyone,” “loves to win all the arguments,” “womanizes a lot,” “quite dirty, sometimes,” “very vindictive,” “farts a lot,” “holds a grudge,” “very selfish” and “not punctual.” There were a few kind words like he gives a lot. Nevertheless, people really had a lot to say and I thought to myself, “I guess M.I will be very immune to tweets and facebook attacks for a long time to come?” In any event, I was unsure how to interpret this.

Where I was confused on the interpretation of the seeming interlude on ‘Track 14,’ Track 15 ‘Imperfection’ provided context. The whole idea that people act like they can’t make mistakes, but they do. They are imperfect because they humans. For M.I, realizing that about himself, he calls on God to help him out when he is imperfect. The son of a preacher, he raps that he is not expected to curse, among other sinful acts, but he does. So I guess track 13 essentially prepared us for track 15 where M.I reveals his imperfections and that he is human. He reveals money owed to debtors, anger, personal issues, all kinds of imperfection but concludes he is essentially made perfect and at peace when he calls on God.

Track 16 finishes with a pledge to remain ‘Unstoppable’ in his music and life’s quest. The album wraps up with track 17 titled ‘Represent’ which essentially is a shout out to to his record label Chocolate City and label mates: Ice Prince, Jesse Jagz and Brymo who all feature on MI2.

As I listen to the album again and the final exit MI makes, I am happy that the album has not been one of those “braggadacious” waste of space and yelling matches on who is the better rapper, a feature that is so common in rap and rap albums. There is so much substance, I not only welcome the seeming vanity on track 17 but think it is well deserved. It will give me a chance to really sit back and digest it all. In the meantime, all work and no play makes M.I a very dull boy. We don’t want that, not for a brilliant artist.