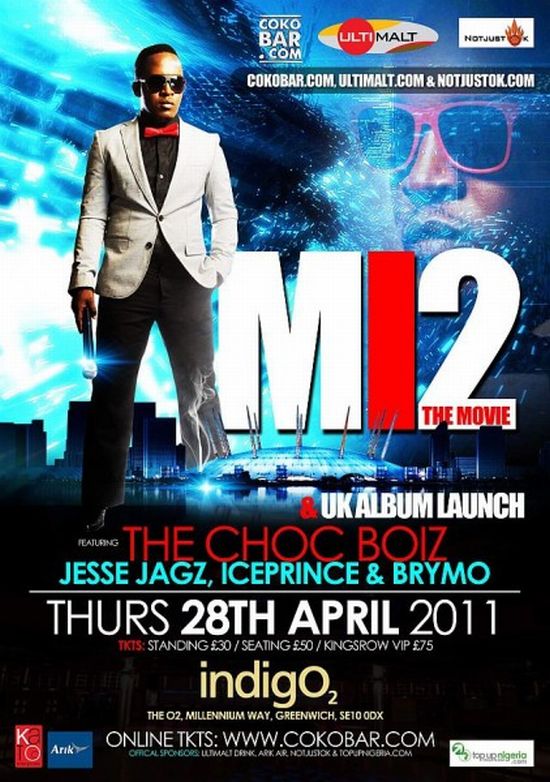 Nigerian rap king M.I and fellow Chocolate City label mates, the Choc Boyz, were in London last week for the hugely awaited ‘M.I 2 The Movie’ UK album launch. The party was set for the 2,400 capacity Indigo2 in Greenwich, London and of course Ladybrille Magazine was up, close and personal with the boyz- M.I, Jesse Jagz, Brymo and Ice Prince.

Or so we thought- when we arrived it became annoyingly apparent that ‘Press Passes’ had magically transformed into ‘Standing tickets.’ So while we were ‘up’ (well standing) and close to the performers, there wasn’t much ‘press’ that could be done!

A show that was supposed to head for a 7pm start time quickly became 9pm and to further irritate the patient audience, the opening acts took to the stage for a rather elongated set of performances. It was a thorough Nigerian affair beginning with Hip Hop/Afrobeats rapper DL performing underground hit 17,18, 19 down to Big Boyz Entertainment’s newest young recruits: Typsy, 2Kriss, Noni Zondi and Lil Miss.

To be honest, the quality of opening acts, soothed the wait. The ever so energetic, however slightly arrogant Typsy gave us an entertaining rendition of young legend-in-the making Dagrin’s 2009 hit Pon Pon Pon to mark the anniversary of his death (Da Grin had a string of successful hits in Africa before a tragic car crash in Nigeria in April last year). Adorable teen brothers 2Kriss swayed our bodies with songs Love and Mama, while Lil Miss’s beautiful presence and South African Noni Zondi’s immensely curvacious figure was actually more than adequate entertainment. When funyman Seyi Law took over to host the show, we were calm enough to appreciate his jokes, which he spoke in both Nigerian Broken English and standard English.

At last, Mr. Incredible (aka M.I) welcomed us wasting no time at all with the very smooth Brymo, whose soultry and sexy voice settles delightfully on our eardrums everytime we hear smash hit Oleku featuring Ice Prince. In white blazers, shirts, black bow ties and trousers, they were a very impressive sight. Blazing through M.I 2 album tracks such as Announcements, Action Film and Beef, M.I also shared the spotlight where due with Jesse Jagz’ (singing Wetin Dey) and of course with Ice Prince and Brymo for song Oleku.

M.I began to test our lyrical/memory skills, and although the album was only released a few months ago, it became interestingly evident that he was amongst a crowd of adoring fans that were able to battle in sync with the rapper. The ladies (including myself of course) almost lost self awareness when M.I’s One Naira popped on. The song features the angelic voice of songstress Waje who had been delayed at an airport. Quick thinking M.I pulled a young woman from the audience to cover it instead, which did not disturb our enjoyment of the song at all as we were too busy having a blast! Indeed myself and many others joined in like a choir to accompany the young lady as she sang a beautiful song of devotion to the women who ignore their partner’s financial circumstances for real love. So when a familiar voice jumped on stage and blew us away with elegant vocals, Waje had cranked the show up a notch by showing true dedication, after setting the stage alight casually dressed and looking flustered.

It was a Choc Boyz boy band theme, as all four were uniformly dressed while ladies were relentless in their attempt to push body parts to the front of the stage. However, being the intelligent and socially conscious rapper that he is, M.I extended the boundaries of this theme by displaying a short video of four men who discussed the daily hustle and grind of life in Lagos, Nigeria. Before we knew it, it became a truly emotional time before it was spoiled by a few ‘boos’ from the patriotic audience. Some even shouted ‘why not show Abuja?’ (the capital of Nigeria which enables better mobility) or ‘You are a fool’ (in Nigerian language Yoruba). I couldn’t agree with these negative responses as M.I had made it clear that he was showing the plight of fellow Nigerians. Humorously, he did save himself by announcing that a Nigerian woman in the audience would make Prime Minister someday- rather convenient eh!

A very late night was saved by an amazing collection of performances, good humour and M.I’s apparent teachings of Nigeria. Showcasing that music from Nigeria has an undisputed place on UK soil and soon world soil, I just hope that it starts on time in future and that press are allowed to function as press!

Video: Obiora Obiwon 'Medley' + Performs Unreleased 'When I Say I Love You' Along with 'Obi Mu O' for his Bride at his Wedding.