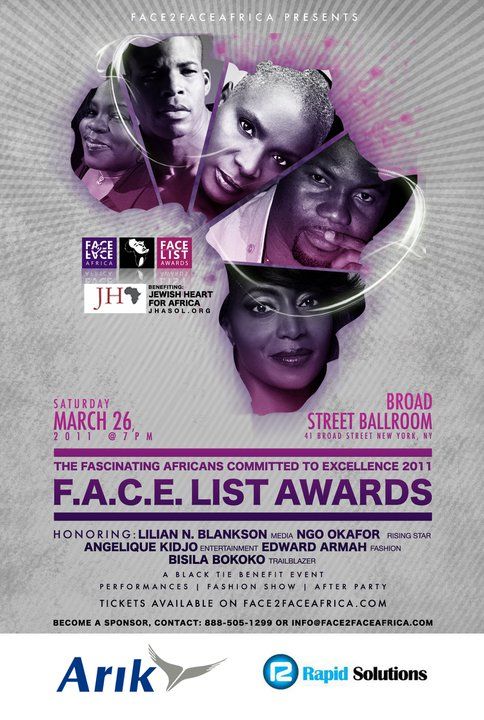 Face2Face Africa just announced their upcoming F.A.C.E LIST Awards to be held on March 26th, 2011 at the Broad Street Ballroom in New York City. The F.A.C.E List Awards is created to honor Fascinating Africans Committed to Excellence in their respective fields. The 2011 F.A.C.E List Awards honorees are:

Angelique Kidjo – Entertainment
Angelique Kidjo has been deemed “Africa’s premier diva” by Time Magazine. Like Miriam Makeba was before her, Kidjo is the continent’s most internationally celebrated female musical exponent. The GRAMMY Award-winning star embodies the spirit of Africa. Through her music, life, and exuberant commitment to advocacy she exemplifies unity, peace, and diversity.

Ladybrille Woman of the Month Bisila Bokoko – Trailblazer
Bisila Bokoko is the Executive Director of the Spain-U.S Chamber of Commerce and also considered one of the ten most influential Spanish women in the American business world. Always reminded by the obstacles she faced as one of only a handful of African families living in Spain, Bokoko founded the Bisila Bokoko African Literacy Project, a foundation focused on providing books and resources to children and families in Africa.

Edward Armah – Fashion
Edward Armah’s BUTTERFLY BOWTIES LLC designs, manufactures, markets, and sells a branded line of high-end luxury men’s furnishing goods including handmade bowties, ascots, vests and silk robes. Edward Armah’s idea of a bowtie that can be worn in four different ways has gained much popularity across borders. While some consider the invention life altering, others consider it a breakthrough in the fashion industry. Celebrities such as Jay Z, and Andre 3000 are among the many fans of the Butterfly Bowtie brand.

The brilliant Lilian Blankson instrumental in Africans being nominated at the 2010 BET Awards – Media (BET International)
Lilian Blankson is the Programming Director, Writer and Producer of BET International. She previously managed all of BET’s Specials such as the BET Awards, BET Rip the Runway, Celebration of Gospel, Hip Hop Awards, and more. Originating from Ghanaian descent, one of Ms. Blank- son’s dreams upon stepping through the doors of BET was to bridge the gap between the African and American Entertainment Industries. She aided in the successful launch of BET International (UK, Africa, & The Middle East) and has enhanced the careers of many well known African artists today.

Fashion Model Ngo Okafor Rising Star
Ngo is on track to becoming one of the most sought after celebrities of our time. He is a successful actor, businessman, and a model, recently cited as the most downloaded male model on the internet and one of the best boxers of his generation. Ngo is committed to bringing more awareness to the importance of sports in his home country, Nigeria.

The FACE team include a fashion show by the notable Cote Minou and Aya Morrison, a performance by Blitz the Ambassador, and several surprise acts throughout the night. Portion of the proceeds will be benefiting Jewish Heart for Africa, which is a non for Profit organization committed to bringing sustainable technology to rural villages in Africa.

Congratulations to the Face2Face Africa team.