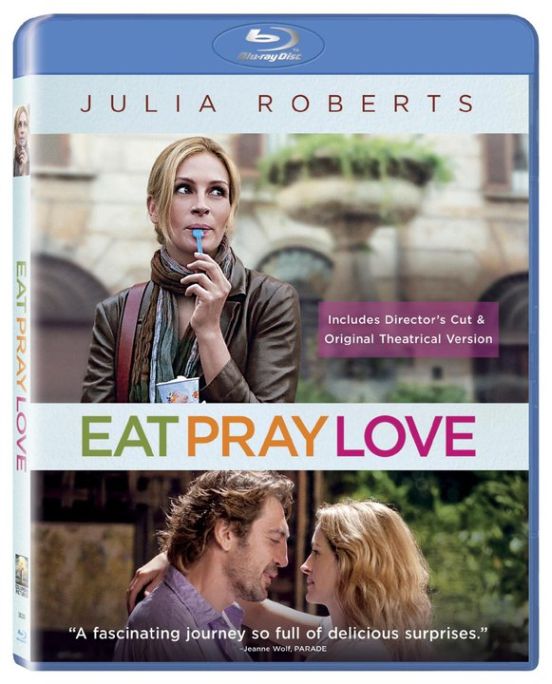 This assessment of Eat, Pray, Love comes from someone who never read Elizabeth Gilbert’s globetrotting memoir. Capably directed by Ryan Murphy (Glee), the film unfolds in fairly-formulaic fashion, all its pretentious New Agey notions notwithstanding. Just think of it as another makeover movie where a female protagonist undergoes a major transformation before riding off into the sunset with Mr. Right.

Julia Roberts turns in an engaging, if less than endearing, performance in the lead role of Liz, a terminally-introspective playwright/journalist stuck in an unhappy marriage. Her hubby, Stephen (Billy Crudup) is a nice-enough guy.

The problem is that the couple has simply grown apart because she has an insatiable wanderlust to visit exotic places, while he’s an underachieving stick-in-the-mud who’s considering going back to law school.

Heavens to Murgatroyd! What to do? What to do? Crying on the shoulder of her best friend (Viola Davis) doesn’t help. Nor does a temporarily-therapeutic fling with the hunk (James Franco) starring in her latest Off-Broadway production. So, Liz files for divorce, crushing her befuddled husband’s heart in the process.

Awkwardly consulting God for advice for the first time in her life (“I’m a big fan of Your work.”), she is blessed with the Divine inspiration to embark on a year-long, world-around sojourn in search of self-fulfillment. Like a woman on a mission, Liz starts with Italy where to “eat” sumptuous feasts and soak in the sights.

After a four-month stay, she’s off to India for a little of the opposite, namely, to “pray” and deny herself sensory delights. Finally, she heads to Indonesia where, if everything goes according to plan, who knows, she might find true “love.”

Along the way, Liz conveniently bonds with a buddy at each port of call: a sweet Swedish tourist (Tuva Novotny) in Naples, a troubled Texan (Richard Jenkins) at an ashram outside Delhi, and a tall, dark and handsome, Brazilian multi-millionaire (Javier Bardem) with a boat in Bali. In the end, perhaps the pat plot sounds more like a fairytale than an earnest, feminist quest for enlightenment.

But that’s probably about the best you can expect from a 21st Century Cinderella with a book deal who had probably already optioned the rights to turn her story into a Hollywood bio-pic.