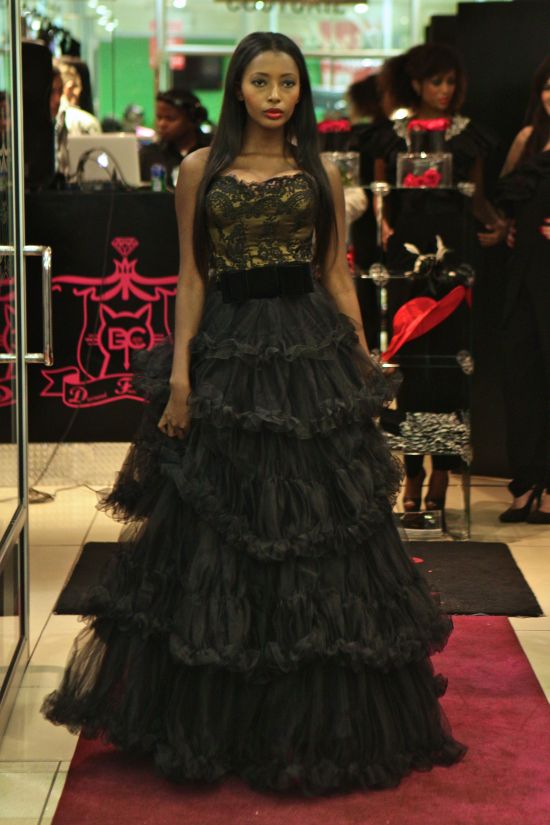 “UYANDA MBULI is an Award-winning Style Icon, Designer and Owner of South Africa’s famous fashion house Diamond Face Couture, also known as ‘DFC’, which is at the fore-front of changing the fashion landscape in Africa.

Diamond Face Couture has a flagship store at the heart of Johannesburg’s northern suburbs in Rosebank, at the THE ZONE SHOPPING CENTRE. Uyanda is currently working with the South African Football Association’s TSHWANE region to establish the Under17 structure. She is responsible for the overall brand development of the Under17 League. She is the former Head of Communications for the Gauteng Government Department of Economic Development; she was also the General Manager for Marketing, and Customer Relationship Management at the Gauteng Liquor Board.

She served as a Deputy Chairperson of Gauteng Film Commission and set on the Board of Tara Hospital. Widely known as ‘Yanda’ to her family, friends and strong-hold supporters, Mbuli holds a bachelor of Commerce from the University of the Western Cape and IMM from Damelin amongst other qualifications. The former Publicity Manager for South Africa’s number one TV Channel, SABC1 is also one of the Ambassadors of international cosmetic giants “La Mer”. Mbuli who was also the first black women to be crowned Mrs Globe South Africa in 2005, hosted High-Profile social diary on PEOPLE Magazine called “The Fabulous Circle”
where you can catch up with her social life and what she’s up to on a weekly basis, on the magazine local version of the international magazine.

Mbuli has presented and acted including anchoring the intellectuals show African Giants on SABC2; competing on Season IV of the celebrity dancing show, Strictly Come Dancing on SABC2 & acting on the SABC1 drama series Tshisa, as Nomonde. She has hosted in-depth interviews with the Cast & Production Team of Tsotsi during the celebration of the 2006 Oscar victory for best foreign film; She has hosted Red Carpet interviews at the KORA All Music Awards-which is the biggest Music Awards show in Africa with over 4 billion viewers throughout Africa & Europe; She covered the 2006 Daytime Emmys in Hollywood on behalf of the South African Broadcasting Corporation. Uyanda also features on the independent musical comedy,
Underground Music.

She is the only South African based TV Personality that features on international celebrity wire networks along big names such as Paris Hilton, Kanye West, Victoria Beckham & Kimora Lee Simmons to mention but a few. She was featured on American Television shows including Fashion TV Red Carpet coverage during the 2006 Spring New York Fashion Week, Extra Television, the Steve Harvey Breakfast Show Live & BET J.”