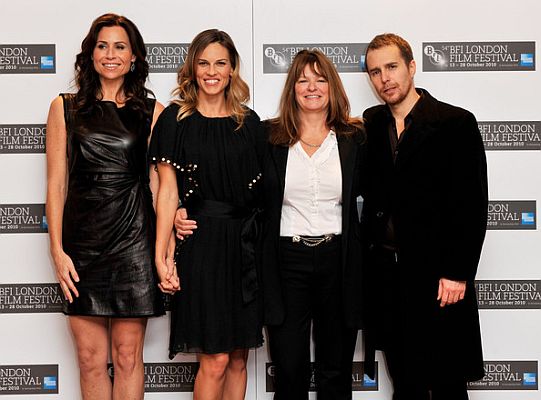 London, yesterday October 27th , 2010, The 54th BFI London Film Festival announced its winners at the high profile awards ceremony held at London’s LSO St Luke’s this evening. Hosted by journalist and broadcaster, Sue Perkins, the five awards were presented by some of the most respected figures in the film world.

BEST FILM: HOW I ENDED THIS SUMMER, directed by Alexei Popogrebsky
Celebrating the most original, intelligent and distinctive filmmaking in the Festival, the Best Film award, presented in partnership with American Express, has been judged by an international jury chaired by actress Patricia Clarkson alongside fellow jurors including Gabriel Byrne. The award for Best Film was presented by Patricia Clarkson to Alexei Popogrebsky for HOW I ENDED THIS SUMMER.

On behalf of the jury Patricia Clarkson (Chair) said:
“With elemental themes of isolation, alienation and the power of misunderstanding, HOW I ENDED THIS SUMMER is a visceral psychological drama set in the immersive landscape of the windswept Arctic.

“Director Alexei Popogrebsky has combined stunning cinematography with painterly attention to production detail and drawn intense and subtle performances from actors Grigory Dobrygin and Sergei Puskepalis. The film turns the hunter-versus-hunted narrative on its head to provoke powerful questions about life and death, resilience and human compassion. Tense, moving and universal in its scope, this is a cinematic tour de force.”

The jury also gave a special commendation to Joanna Hogg’s subtle and sophisticatedARCHIPELAGO, praising the film’s taut and truthful performances and visual beauty.

Juror David Morrissey comments: “This year’s Best British Newcomer category was amazingly strong and the jury was impressed by all the candidates. The three young actors nominated all delivered exceptional performances, and at a time when raising money for films and keeping them on track is so difficult, the two producers on the shortlist should be commended for their exceptional work. Finally, the three writer/directors nominated for IN OUR NAME, SUBMARINE and THE ARBOR created three very different, challenging pieces of work. The jury was hugely impressed by all of their films.”

Tony Grisoni adds: “Focusing on playwright Andrea Dunbar’s uneasy relationship with her daughter, Lorraine, Clio Barnard’s genre-busting film THE ARBOR is innovative, eloquent and emotionally resonant. This film, which touched all of us, both challenges conventional filmmaking and at the same time engages with real lives. A stunning debut.”

SUTHERLAND AWARD: Clio Barnard, director of THE ARBOR
The longstanding Sutherland Award is presented to the director of the most original and imaginative feature debut in the Festival. This year, Clio Barnard took the award for her film THE ARBOR, which was presented by jurors Michael Winterbottom and Olivia Williams.

Festival Artistic Director and Chair of the jury, Sandra Hebron, comments: “THE ARBOR is a brave and highly original debut with many levels of experimentation on show. With outstanding performances that give a great resonance to thewords of real people, Clio Barnard’s film tells a fascinating story with sophistication and haunting emotional impact. This is a challenging, moving and utterly memorable film and a deserving winner of the Sutherland Award”.

GRIERSON AWARD for Best Documentary in the Festival: ARMADILLO, directed by Janus Metz
This award is co-presented with the Grierson Trust, in commemoration of John Grierson, the grandfather of British documentary. Recognising outstanding feature-length documentaries of integrity, originality, technical excellence or cultural significance, the jury was chaired by Kevin Macdonaldand the award was presented by journalist and broadcaster Jon Snow to winner Janus Metz for ARMADILLO.

Kevin Macdonald (Chair of the Jury) said: “Filmed with a combination of extraordinary intimacy and stylistic sophistication, Janus Metz’s ARMADILLO follows a group of Danish soldiers on their first posting to Afghanistan. With total access and great honesty, the film shows us why these men want to go to war and what the experience of action does to them. Humane but clear eyed in its attitude to the conflict, we believe that Armadillo is a touchstone film that will be watched for years to come.”

BFI FELLOWSHIP: Danny Boyle
Awarded to an individual whose body of work has made an outstanding contribution to film culture, the Fellowship is the highest accolade that the British Film Institute bestows and was awarded to director Danny Boyle. Boyle, whose film 127 HOURS will close the Festival, was presented with the award by Stephen Daldry.

Legendary film director Martin Scorsese was also present at the ceremony to deliver a special tribute to the work of the BFI National Archive, which celebrates its 75th birthday this year.

The Star of London award was commissioned especially for the Festival and designed by leading sculptor Almuth Tebbenhoff.

Africa’s Biggest Challenge is not the West