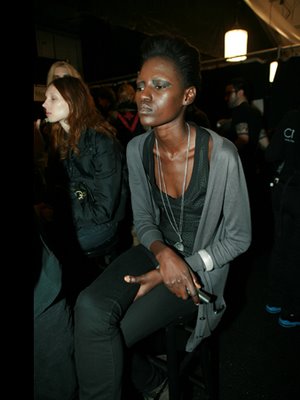 Friday, February 8 marked the end of the Fall 2008 Mercedes Benz NY Fashion Week and another marathon work week for me. As usual the week was filled with long hours behind the scenes with some of the most talented designers alive today. While most of what is reported in the news is what happens on the runways, there is another world of fashion which takes place weeks before and sometimes after the runway shows.

This season, I continued to observe a steady decline of big name designers showing at the Bryant Park tents during NY Fashion Week. While designers such as Donna Karan, Oscar de la Renta, and Vera Wang did show their collections during fashion week, very few did so at the once thriving Bryant Park tents. My week was filled with both ready-to-wear (Y-3, Diesel, Rag & Bone) and couture (Vera Wang, Oscar de la Renta) shows, many of which took a lot of preparation and focus. The week began with a simple showing of Rag & Bone and Lacoste’s ready-to-wear collections with the usual long waits and many of the same model faces.

United Bamboo, held at the Altman building on 23rd street, contained the usual mix of men’s and women’s wear. Because of the quick changes and quite a few passes – models using the same items for different looks – the show looked to be a stressful one. Add that to the fact that the backstage changing area was extremely cramped, the United Bamboo show set the pace for the other complications at the week’s shows. Sunday brought one of my most anticipated shows season after season, Y-3, held at the Pier overlooking the Hudson river. Each season the Y-3 team meticulously puts together a splendor show with over the top sets and a ready-to-wear collection bordering on couture. The use of complex fabrics and impeccable construction always excites and inspires. The show is always a joy to work with as everything is always planned to the tee and there are always more than enough people backstage to check and double check that each model is dressed and styled exactly as the design team has specified.

The first true couture show of my week came on Monday, with the Oscar de la Renta fashion event held at an old church at Park Avenue. My work with the Oscar de la Renta styling and production team began early on Monday morning at the designer’s showroom at the famous 7th Avenue showroom building which also houses Ralph Lauren, Donna Karan and many of the premier designers. After checking and transporting the garments to the event venue, with a tight security detail, our small team spent most of the morning unpacking, sorting and arranging the delicate dresses. A few hours before the show, Mr. De La Renta arrived with a small entourage of family and assistants. Ever the gentleman, he spent the time going over the pace of the show and meeting and greeting various media and celebrities. The basement of the church was abuzz with activity as the show’s producer called for the models to get into their first looks while photographers jockeyed for position in the small hallway backstage. Between the photographers, models, security, production crew, dressers, and various assistant designers and stylists, the small backstage area was a tight fit. The show went on without much of a hitch with the exception of a few models tripping while running to change. The day ended back at Bryant Park for Iodice’s Brazil-inspired fall collection. 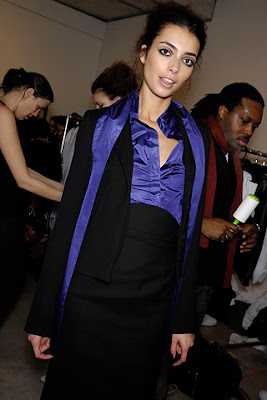 Diesel was next on the calendar. As is always the case, the collection was a mix of fabrics and accessories with a high-end street style. After getting familiar with the styling notes, the dressing team waited as models were styled with dramatic hair and makeup. Speaking with Senegalese model Kinee and a Parisian photographer, I got to understand the difference between NY fashion week and the European shows. While the New York shows have become much more commercialized and celebrity driven, I was made to understand that many people who work during the various fashion weeks prefer the exclusivity of Paris and Milan.
As a veteran of NY Fashion Week, I too have seen the change in attendees here in New York. No wonder so many of the more established designers are beginning to show off-site and in Europe. The Diesel show commenced with African models, Honorine and Kinee, giving the “young, fresh, tough” attitude they were directed to give by the production team and designer. The show was well worth the long wait by the backstage crew, as everything went through without a hitch. The backstage area was swarmed with media and celebrities directly after Diesel’s owner Renzo Rosso took his bow. Going to Joanna Mastroianni’s show was a change of pace from Diesel’s celebrity packed street atmosphere. While her shows are always fairly small compared to some of the other designers’ Joanna Mastroianni’s designs are as couture as they come, with here intricate beading and hand sewn accessories, Joana Mastroianni’s shows are true to the spirit of NY Fashion Week.
The secret celebrity event of the season was Gucci’s charity reception/dinner at the United Nations. While the location of the event was not announced until a press conference by the current UN Secretary General, everyone was buzzing about the event for a while before. Organized as a fundraiser for UNICEF and Madonna’s Malawi charity foundation, Gucci took the opportunity to also announce the opening of it’s flagship store at Trump Towers on Fifth avenue. As word got out about the Gucci event, various groups began to speculate about Gucci’s intentions. But the controversy did not stop the show as celebrities galore attended Wednesday night’s event. The UN was the place to be as everyone from Madonna and Tom Cruise, to Rihanna and Alicia Keys made an appearance. As one of the biggest events of the week, security was extra tight and backstage access was very limited. With 120 waiters all dressed head-to-toe in Gucci, it was a long day and night for the fashion crew dressing and prepping the talent.

Leaving the Gucci event in the wee hours of the morning, I caught a 1 hour nap before heading over to Bryant Park for the Vera Wang fashion event. As expected, the backstage area was already buzzing with activity as models sat in hair and makeup and the design/styling team organized the looks for the show. With the models still in hair and makeup, we got a chance to admire the construction and fabric used in the delicate collection. Many of the looks had multiple layers and the fine fabric made for some difficult model changes. But in true professional form, the Vera Wang team sent the collection down the runway without the audience realizing the complexity of putting together the presentation.
The final show on Friday took place at an art gallery in the posh gallery district on 26th street. The L’Wren Scott show was an extremely intimate one, with simple chairs set around a U-shaped table. Designer L’Wren Scott, girlfriend of rocker Mick Jagger, designed a rock -inspired couture collection with many of the garments fitting the models tightly. With a select celebrity-filled audience, the show was a slow and serene one; a big difference from the previous shows I had attended early in the week. After the show, everyone relaxed and reflected on the past week, as supermodel Christie Turlington, actress Ellen Barkin,and Vogue editor-at-large Andre Leon Talley came backstage to congratulate the designer.

Kofi Annan is an entrepreneur, strategist and author whose African style and business trends blog, Annansi Chronicles, was named one of the top 100 lifestyle blogs by Kineda.com. A recognized expert in culture branding his award-nominated work has been featured in Entrepreneur Magazine, Reuters, BusinessWeek, Advertising Age, and Inc. Magazine among others.