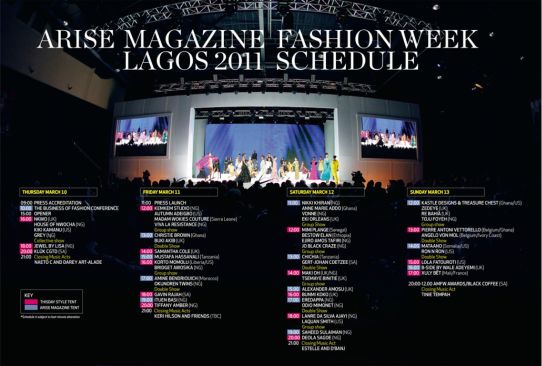 Arise Magazine Fashion Week Lagos 2011 kicks off tomorrow March 10th, 2011. LadybrilleNigeria.com will be bringing you the scoop from the event soon. In the meantime, here is the latest news from the Arise camp about the event.

THE DESIGNERS: The event has up to 50 African fashion designers participating. The fashion shows will be in three categories: Group, Double and Collective showcases over four days.

THE MEDIA: The Media present will include Ladybrille  as well as national and international print, online and television media.

What ARISE Magazine founder Nduka Obaigbena has to say: “We feel the time is right for us to create our very own series of major events and show the world that Africa is here to stay at the cutting edge of international fashion. Part of
ARISE Magazine’s mission continues to be the promotion of new and established African and African diaspora designers. ARISE Magazine Fashion Week is only the start of our worldwide ambitions.”

The Hugely Influential Power of Selfridges: “Nigerian Fashion in London, has its Time Come?”