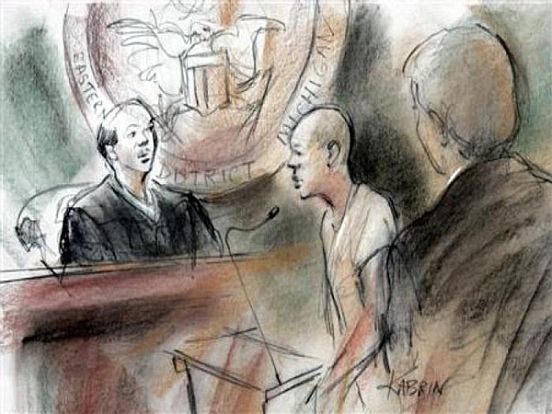 Umar Farouk Abdulmutallab appeared in Federal court for an arraignment to face the six charges leveled against him, including attempted murder. The court informed him of the nature and cause of the accusations and he subsequently entered a “not guilty” plea. BBC News, Detroit reports:

“BBC News, Detroit
Considering the violence of the attempted crime, Room 100 of the US district court in Detroit was surprisingly calm, just an hour ahead of Umar Farouk Abdulmutallab’s first appearance.

Seating was limited to those who had queued outside on the frosty pavement for a pass several hours earlier.

In the front rows sat a delegation from the Nigerian embassy in Washington. One of the diplomats said the accused’s family had not come.

Court official
The official courtroom artists – those who draw the sketches of the scene inside – sat opposite the chairs reserved for the defence.

An official asked them to be careful about what they depicted.

“I don’t want anybody to be able to see how far the podium is from the rest of the room,” he explained.

If not nerves, there is some awareness here of the potential at least for some sort of attack against the court during such a sensitive trial.

And then, without warning, and five minutes before the case was due to start, there he was.

The man who faces six charges, including attempting to blow up a plane and kill the 289 other passengers and crew on 253 to Detroit on Christmas Day, hobbled in – perhaps because of the injuries sustained or the leg irons he was wearing.

A short young man, he sat in a chair and for several moments listened and nodded to his lawyers.

THE CHARGES
Attempted use of a weapon of mass destruction
Attempted murder within the special aircraft jurisdiction of the US
Wilful attempt to destroy and wreck an aircraft
Wilfully placing a destructive device in or near an aircraft which was likely to endanger the safety of the aircraft
Two counts of possession of a firearm, ie the bomb, in furtherance of violent crime

Profile: Umar Farouk Abdulmutallab
Q&A: ‘Jet bomber’ case
He looked up slowly, his eyes staring with a slightly vacant look at the court. His shoulders were hunched.

Then the court stood, and the judge came in.

Mr Abdulmutallab approached the bench, slowly again. He spoke to say his name, then spelt it out at the judge’s request.

The judge asked him what level of school he had reached. He seemed not to understand – though his English seemed excellent.

The judge asked him if he had attended secondary school. “Yes,” he replied.

The judge asked if he had taken any medication in the last 24 hours. He said he had not.

Then he corrected himself, in a soft, lilting and polite voice: “In the last 24 hours? Some painkillers,” he told the judge.

The court was quiet.

Then the judge asked if he had had time to see the six charges against him, and understood them. He replied yes to both.

“Do you understand the sentence you face?” Mr Abdulmutallab was asked. “Yes, I do.”

It was hard to read his thoughts, hard to tell what he has been thinking in the 14 days since the attempted bombing.

His lawyer told the court he would not be applying for bail.

The judge said there would be further proceedings at a later date, and after a little more procedure, that was it. Less than three minutes in all.

As the court rose, and the judge left the chamber, Mr Abdulmutallab turned to his left to walk out of the court.

Then – in the first display of any real interest on his part – he craned his neck to take a look at the front row of the public gallery.

It was hard to read any emotion on his face as he looked for anyone he knew, a family member perhaps.

Idols Comes to Nigeria (Nigerian Idol) with the Help of OMG