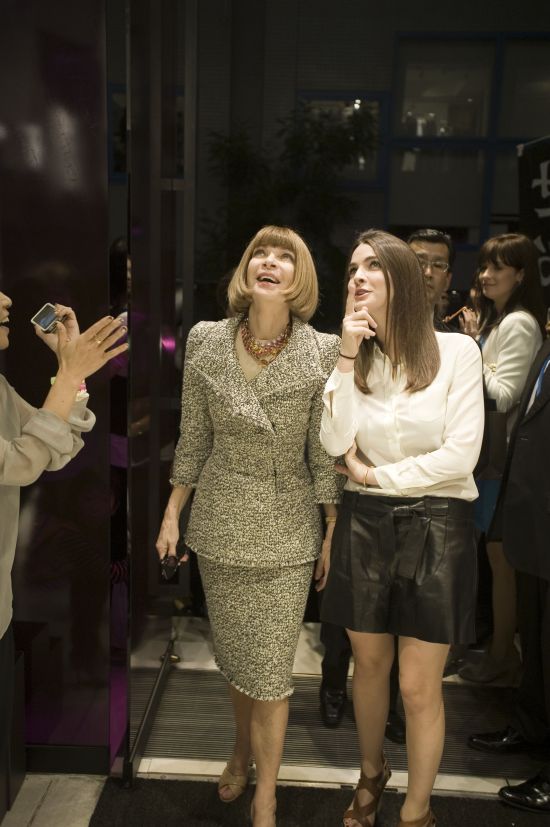 TOKYO – Thousands of shoppers in Tokyo joined Editors of Vogue from around the world on Saturday, November 5th,2011 for a very special Fashion’s Night Out event in a bid to boost spirits and sales following the earthquake and tsunami which devastated Japan earlier this year.

Following an official opening ceremony at the Omotesando Hills shopping centre with the Vogue Editors, models, celebrities and designers including Christopher Bailey, Michael Kors, Giambattista Valli, Roberto Cavalli, Derek Lam, Lucien Pellat-Finet, Kris Van Asche, Peter Copping, Stuart Vevers, Ai Tominnaga and TAO, all took to the streets where over 400 brands were participating in this unique Fashion’s Night Out. A celebration of fashion in the shopping meccas of Omotesando, Aoyama and Harajuku, stores were hosting styling events, specially commissioned installations, designer appearances, limited edition items, as well as Fashion’s Night Out product on sale with proceeds going to Children Without Borders among other charitable initiatives.

Jonathan Newhouse, Chairman Condé Nast International, said: “We have come here from all over the world because we care deeply about Japan. The Japanese love for beauty has inspired artists, architects, poets, film makers, fashion designers and editors. It is perhaps the reason why historically, Japanese people are the foremost consumers of fashion and luxury goods in the world. We come here to show our respect for Japan, to give support to Japan, and to say thank you to Japan for inspiring us.”

Tokyo’s unique Fashion’s Night Out was conceived by Jonathan Newhouse, whose idea it was to bring the Vogue Editors together. This was the culmination of the Fashion’s Night Out season 2011, having taken place in seventeen countries in September. Record crowds have participated in a nocturnal festival of shopping in a street fair atmosphere in cities including New York, London, Paris, Milan, Madrid, Mexico City, Shanghai and Berlin, and the event has been credited with raising spirits and retail sales as thousands flock to the hundreds of stores open late.

Originally created by American Vogue editor Anna Wintour in 2009 during the depths of the economic crisis, Fashion’s Night Out was born out of a desire to give joy to Vogue readers and to help improve sales for the designers and retailers of the fashion world.

South African National Fashion Conference, The Business Side of Fashion