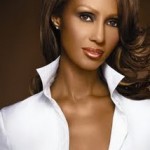 Supermodel Iman joins Supermodel Oluchi in partnering with MNET’s Face of Africa Model Competition. Iman officially endorsed the competition late last month and her company IMAN Cosmetics will be the official make-up supplier of the newly launched 17 part series, which culminates in a finale in Lagos, Nigeria in February 2010. The winner at that event, in addition to winning a US $50, 000 cash prize from M-Net and a modeling contract from Oluchi’s O Model Africa, will also win the opportunity to hang out for one day in New York City with IMAN Cosmetics and IMAN.

The partnership also includes the provision of IMAN Cosmetic make-up artists, gift vouchers for the 25 semi-finalists, individual make-up sets for the Top 10 plus make-up and skin products for 12 months for the winner.

Rihanna, U2 and Jay-Z to Release Charity Singles for Haiti

President Bush, A Legacy of Strong Aid to Africa