The inaugural 1st annual 360 Fashion & Tech “Startup Runway & Innovation Awards” 2015
was held on November 3rd, 2015 in San Francisco. The event attracted  Silicon Valley’s VIP fashion and technology enthusiasts with over 400 C-level executives from technology, fashion, and venture capital attending and the remaining 100 guests from the creative arts and other industries.

Over 75% of the attendees were women, with the entire ecosystem coming together from wearables, iot, mobile, and cloud computing into one room to envision the future together. A future that asks the question: what happens when we connect clothing up to to the ecosystem and to a supercomputer? What will our future fashionable lifestyles look like?

Mia Morgan did an amazing styling work of envisioning that future and having designers such as Rami Kadi with his holographic couture collection and glow in the dark bug gowns brought a whimsical aspect to the event filled with elegance. iimuahii showed a robotic future where models only look human and have beautiful sculptural, illuminated exoskeleton-like clothing to protect against the harsh environment we are entering. Shenova, a local SF brand known for her tecky digital prints launched a particle physics dress that used IBM Bluemix to interact with the audience and change color according to popular vote. One could argue that this was just another example of blinking fashion–but we beg to differ in that they are the baby steps of experimentation in fashion that can be interactive on the social level and with your environment.

Renowned speakers such as Howard Rheingold talked about how people use clothing to cue their social status and grouping: such as goths with black clothing and black makeup, punk, and how art or political movements, music  are part of the lifestyle that they represent. That he couldn’t say for sure if illuminated clothing would become the future norm, but what he could say was that innovation comes from the tinkerers, the artists, the makers–the people who are playing with things and experimenting. Innovation is often sparked by using the technology in ways that were not intended by the business community.

3D Systems showcased the Iris van Herpen dress piece designed by Niccolo Casas and 3D printed by 3D Systems down the runway filmed with a Rico VR camera for users to later experience in their Oculus Rifts what is feels like to be wearing the dress on the catwalk in a simulated experience. 360Fashion Network uses VR heavily in the leadup to the event to give followers the opportunity to experience the fashion show castings through their own eyes with VR thanks to Asier Arranz: https://www.facebook.com/360Fashion/videos/10153739040824936/?theater

The event was called “Startup Runway” because fashion tech entrepreneurs walked the runway speaking about their vision of the future. Speakers included IBM’s General Manager, Sandy Carter who said, “Our vision is simple, we believe that IOT should be as easy as putting on a dress, coding should be as frictionless as a ball gown flowing down a staircase, and mobile should compliment your business just like your accessories compliment your outfit.”

Other speakers included Sanita Laivina from Blackbox VC, Lisa Lang from ElectroCouture, Anouk Wipprecht, Howard Rheingold, Mary Hodder Board Member, Chairperson of IDESG, who spoke with Rachel Fishbein from Law on the Runway on the topic of individual privacy about the data collected while using a wearable.

“The difference between the internet and mobile, is an order of magnitude more personal information shared and collected. Wearables are yet another order of magnitude more personal in terms of what can be collected and shared. Wearables makers need to figure out how to change the paradigm we have now with web and mobile when collecting and selling out user data, to put the individual in charge of their own data, or people will worry and reject wearables as they hear about privacy violations. Working with people is the best way forward, respecting them and involving them if data is collected or shared.” said Mary Hodder.

After the wearable tech and fashion show, companies came onto the stage and launched new products and cooperations such as Lisa Lang and Laura Wass from WXYZ Jewelry, Blocks, Shenova, and Anina Net from 360Fashion Network presented a motion detection dress which lights up in specific patterns while the wearer is walking, and stops lighting up when the wearer is stationary. The Motion Detection Dress is an example of what can be created with the 360Fash Kit, a new kit 360Fashion Network and Maker Collider are launching for fashion designers to have all the technology equipment needed out of the box to create their own LED motion detection clothing. The 360Fash Kit is poised to launch in 2016 and will comprise of sensors, a 3D Printed Gem, the stl file, led fabric ribbons, and an Intel Edison chipset pre programmed and easily built upon to catch the current LED dress trend emerging on the market.

The event rounded off with two awards being given to San Francisco State University Apparel Design and Merchandising students for Visionary Product and Visionary Design. 360Fashion Network cooperated with the Apparel Design & Merchandising students at San Francisco State University, professors Constance B Ulasewicz and Kelly Lynn Reddy-Best, worked with students providing them with 15 technology keywords to research and create a garment or product line based on those keywords. Resulting garments and product line boards will be on display in an innovative exhibition with two awards given as “Visionary Design” (Garment) and “Visionary Product” (Story Board/Line) for the Best in Show. Judges will be: Anouk Wipprecht: Fashion Tech Designer, Eliane Fiolet: UBERGIZMO, Rumiko McCarthy: Global Gratitude Project, Gail Baugh: PeopleWearSF, Jeanne Allen: FISF, Mika Uehara: SF FASHTECH. The winners were Christine Ng and Nika Gagliardi.

“The purpose of our events are really to take people on a journey to envision the future.” says Anina Net, Founder of 360Fashion Network.”We are bringing with us 5 years of experience from our 360Fashion & Tech shows in Asia. Today Silicon Valley is the place to be and our aim at 360Fashion Network with this event in San Francisco is to showcase the convergence from the best of two worlds and offer a vision of possible futures for the fashion brands and consumers to embrace.” 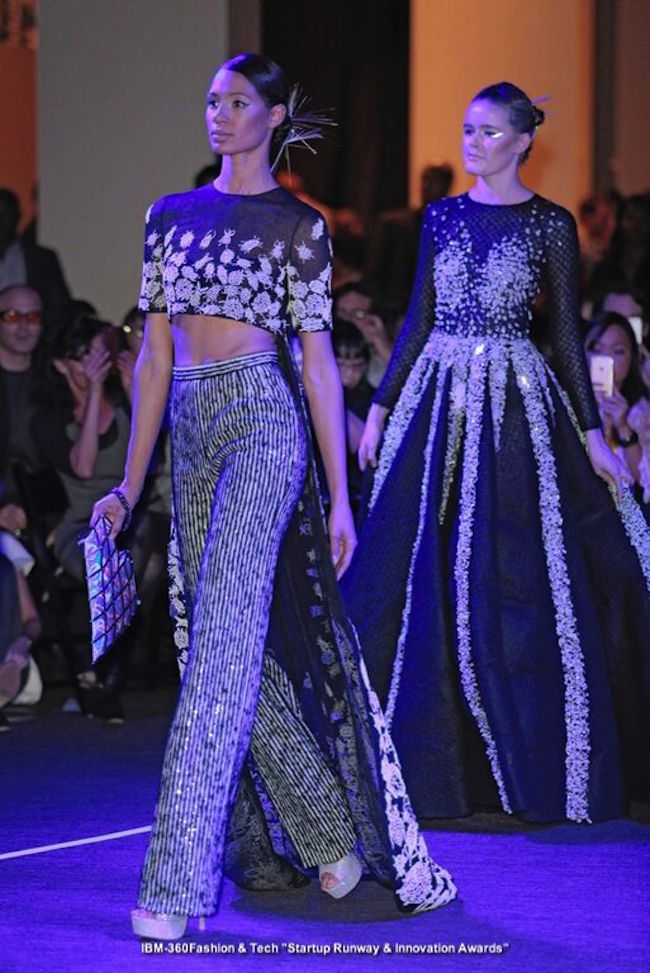 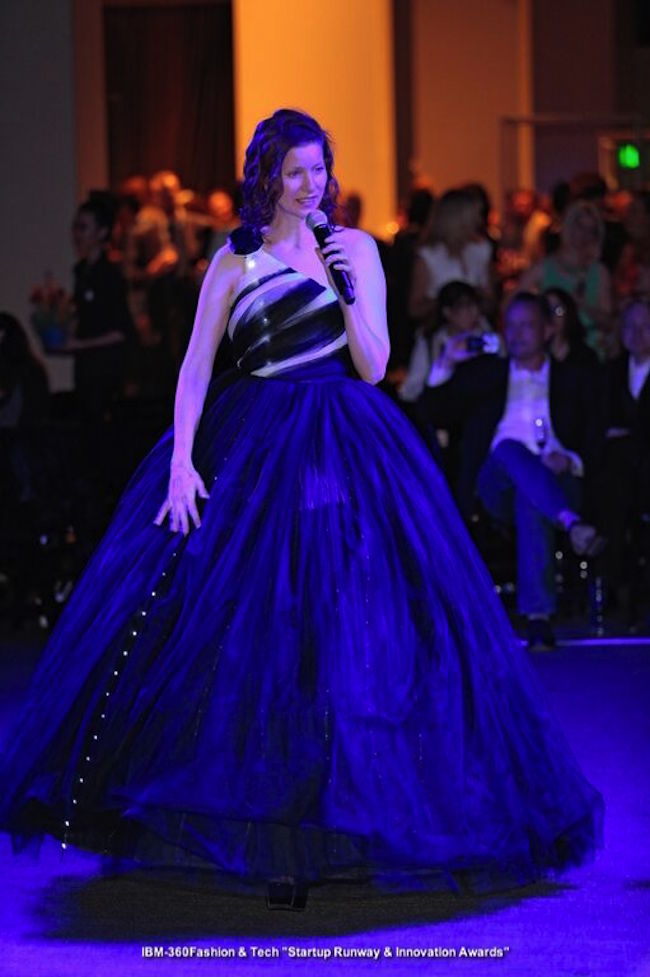 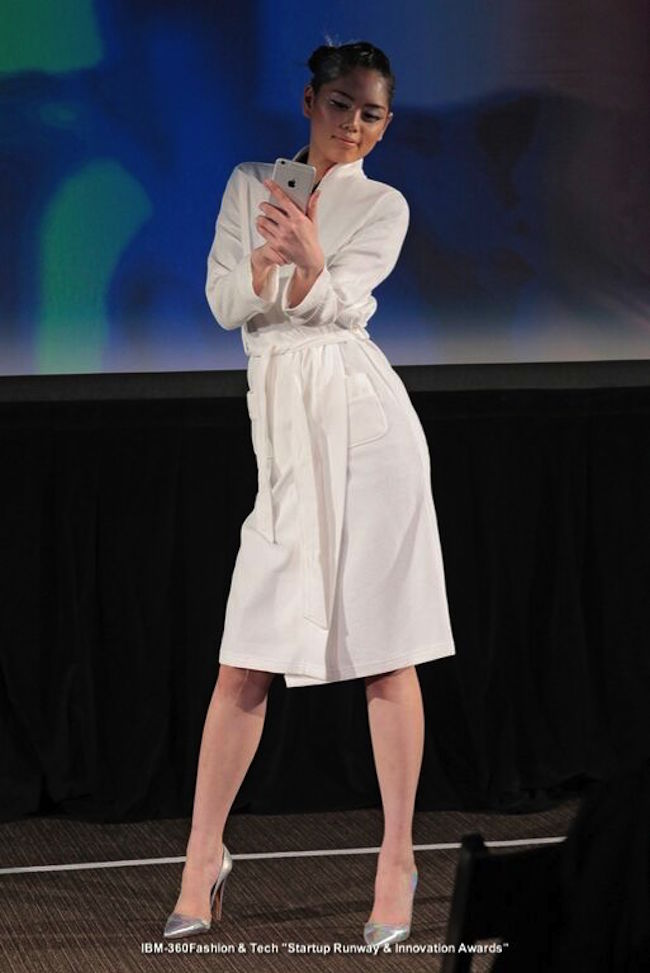 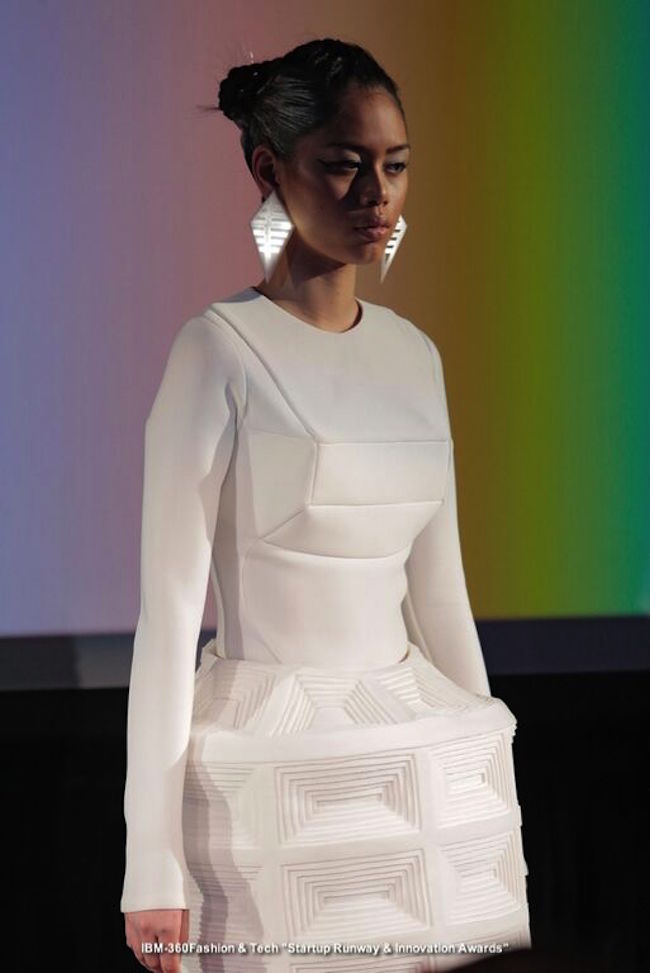 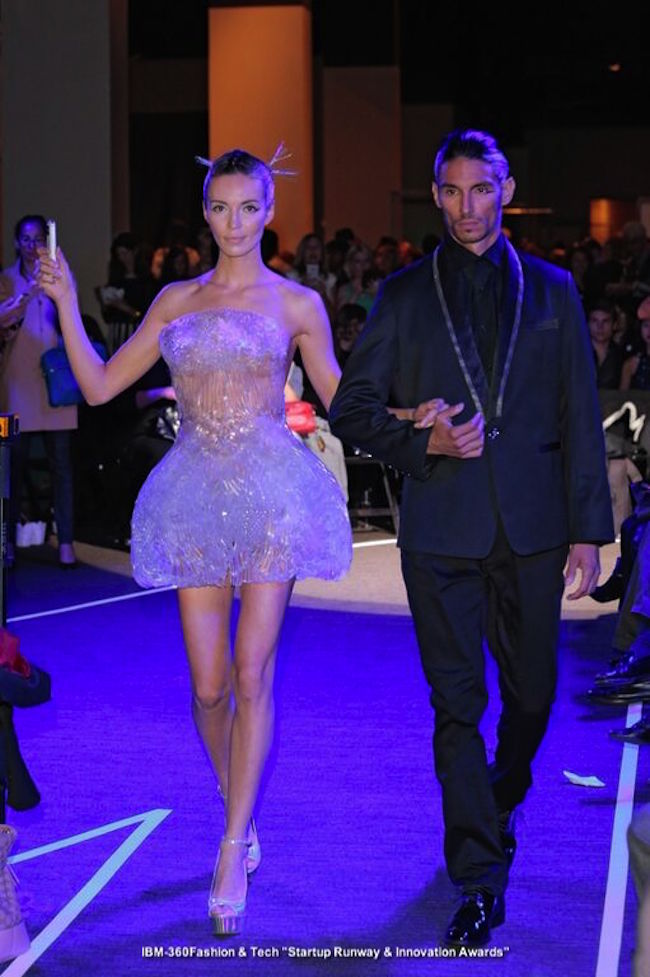 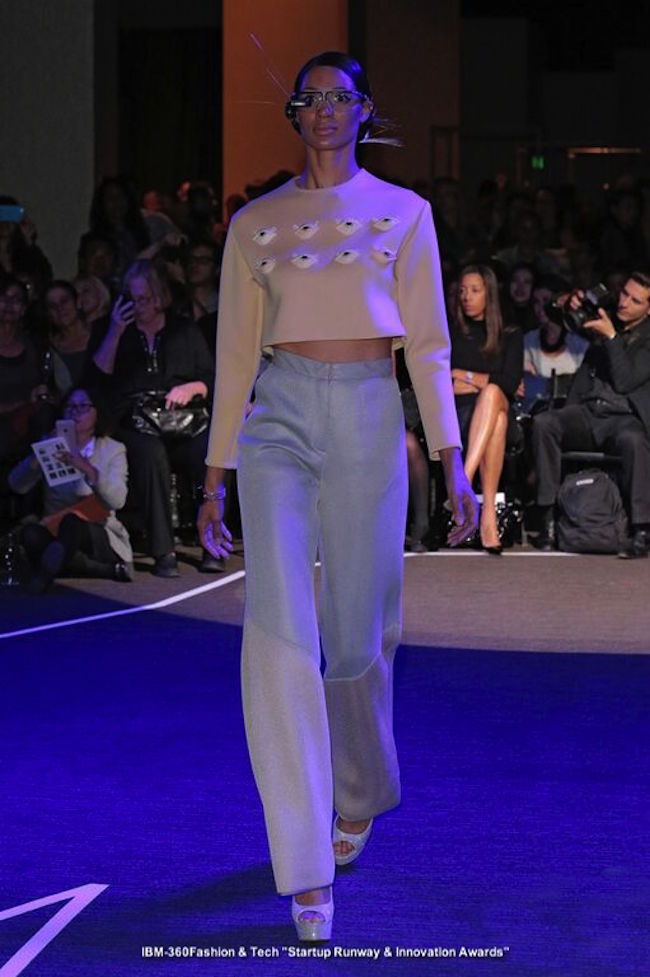 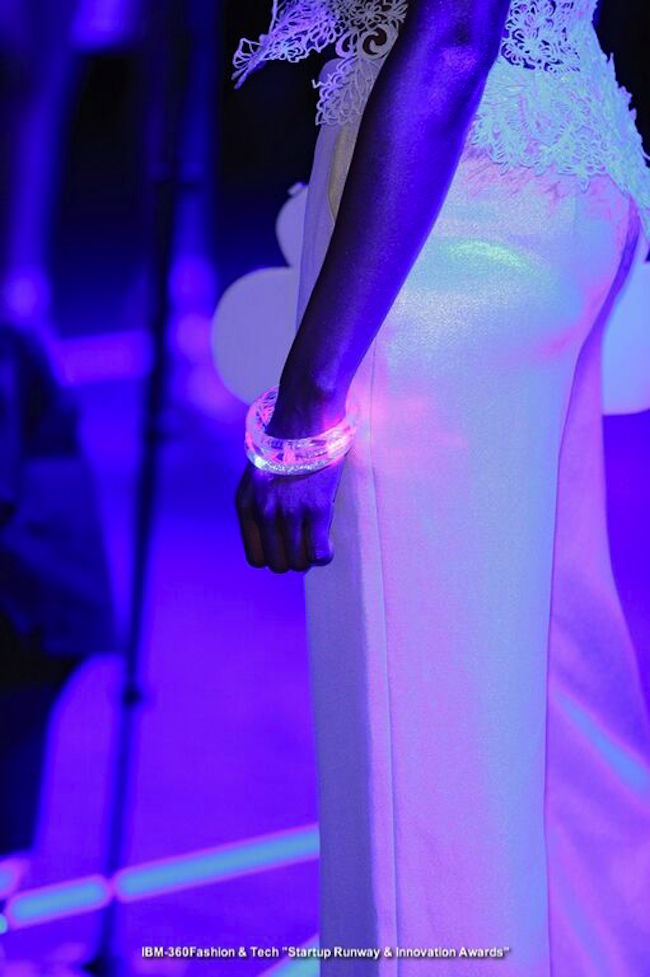 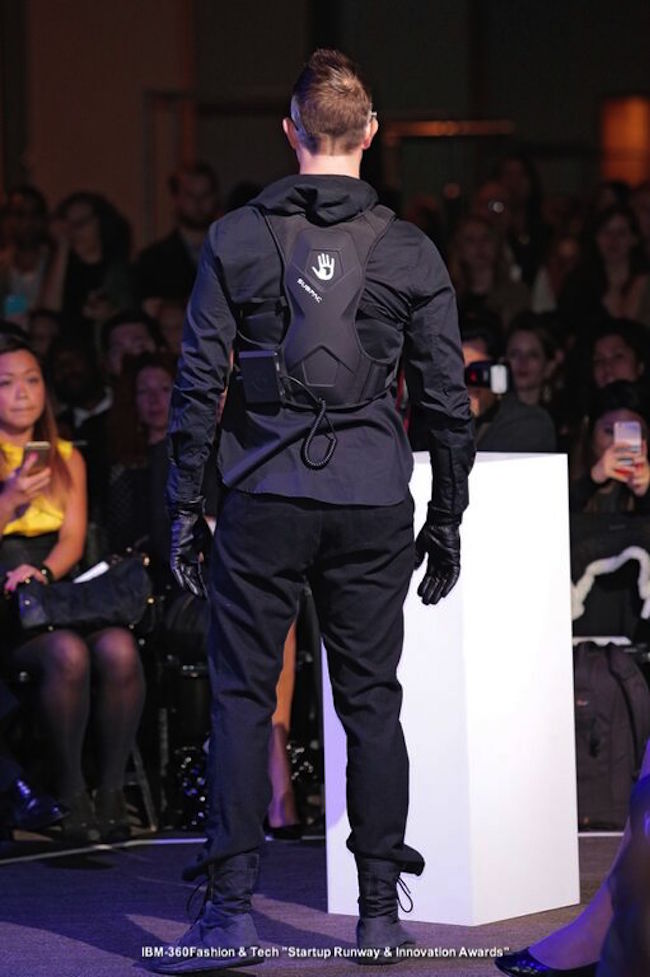 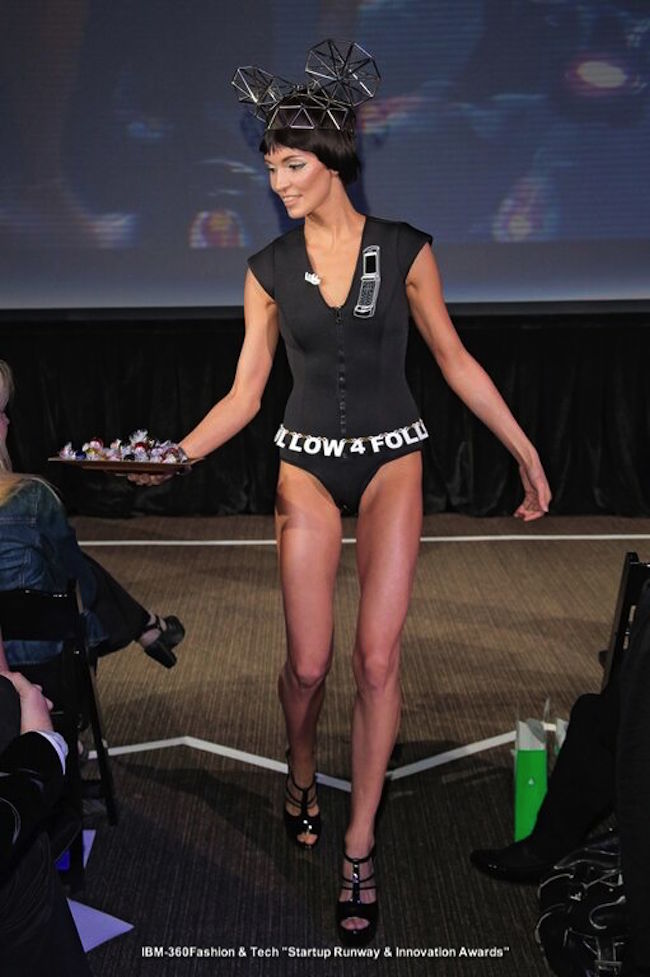 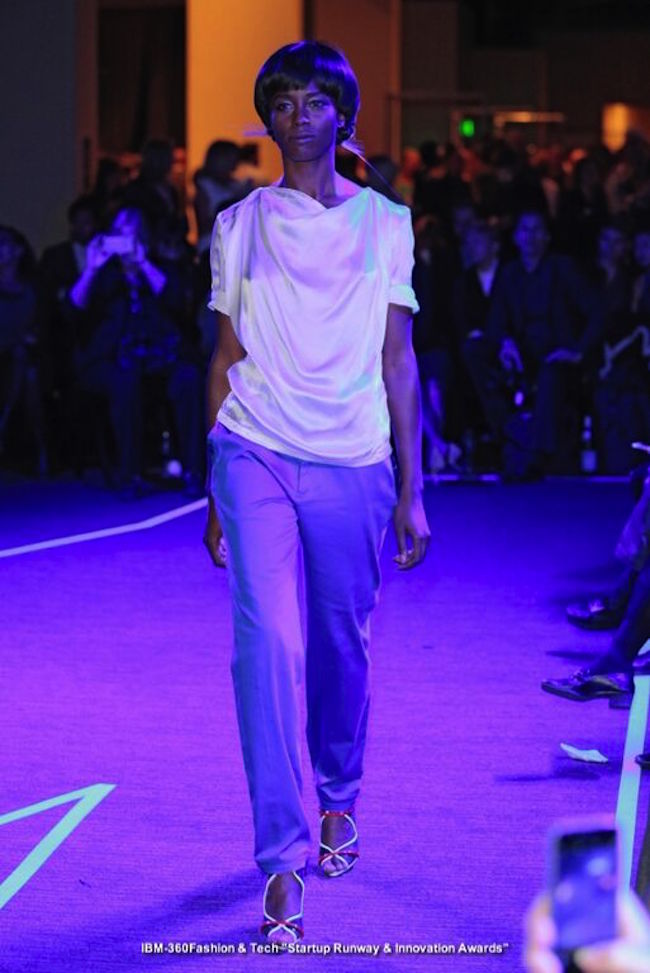