SAFW Scouting Menswear in association with GQ Magazine ROGUE
Rogue Wear is a men’s apparel brand founded on the principles of high quality, innovative design and superior fit. With a firm foundation in the craftsmanship of traditional menswear, the brand aims to develop a visual aesthetic that merges futurism with classicism. Graduating from LISOF in 2011 with a Bachelor of Arts in Fashion, Henni draws inspiration from current and future technologies by continually exploring and experimenting with various concepts. 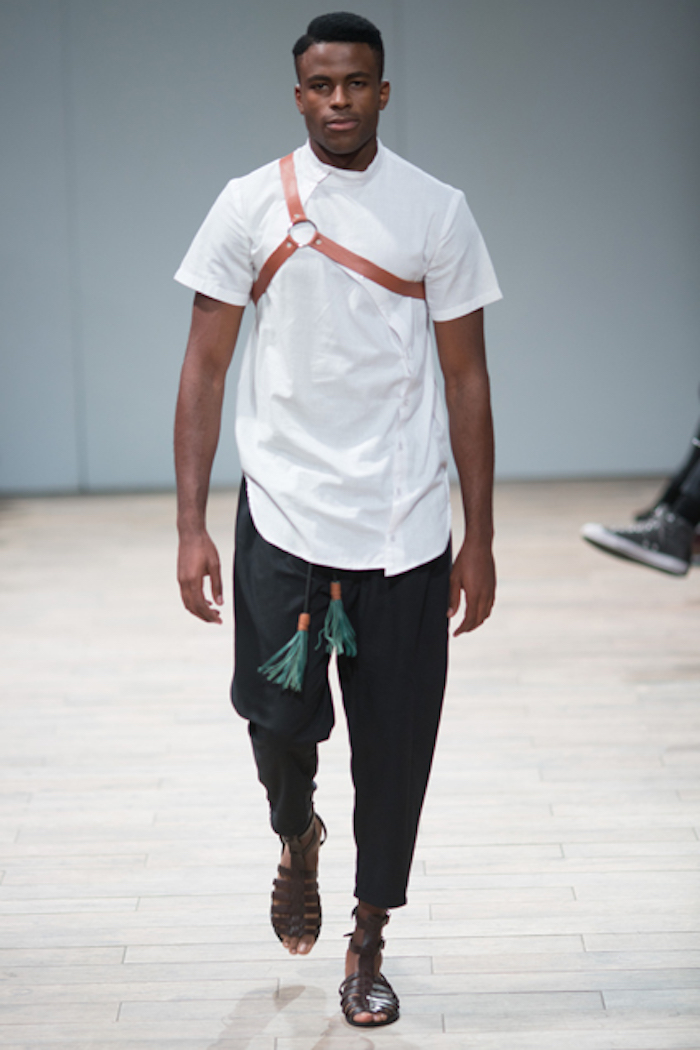 Floyd Avenue is known as one of the founders of The Smarteez ‒ a South African youth culture phenomenal boasting multi colours of individuality. They graced a number of international magazines such as The Fashion Bible, W Magazine, Dazed and Confused, Red Bulletin, Japanese Vogue and Mois Le XXI siècle en images. They won a SA style award for innovative spunk and have been featured on a Channel 0 campaign called Young Gifted and Black. Floyd’s menswear aesthetic draws on cultural references to inspire clothing that is innovative, that rises above trends and that creates a meeting place between unadulterated comfort and exquisite design. His clothing sings jubilation songs of freedom as he is of the 1st generation to enjo the young democracy of South Africa. He knows that the previous generation fought for democracy and his generation has to work towards turning South Africa around. His clothing brand, Floyd Avenue, portrays a multi layered cross-pollination of cultures and shared spaces through digital media. Since inception in 2013, Floyd has styled four Rolling Stone SA covers, which include International star sensation Spoek Mathambo and King of Malombo Music Philip Tabane. Floyd himself has been featured in a full page spread in the Mail & Guardian. He recently shot a documentary with KIEM Media of Amsterdam for Heineken on 20 aspirational people to watch around the world. 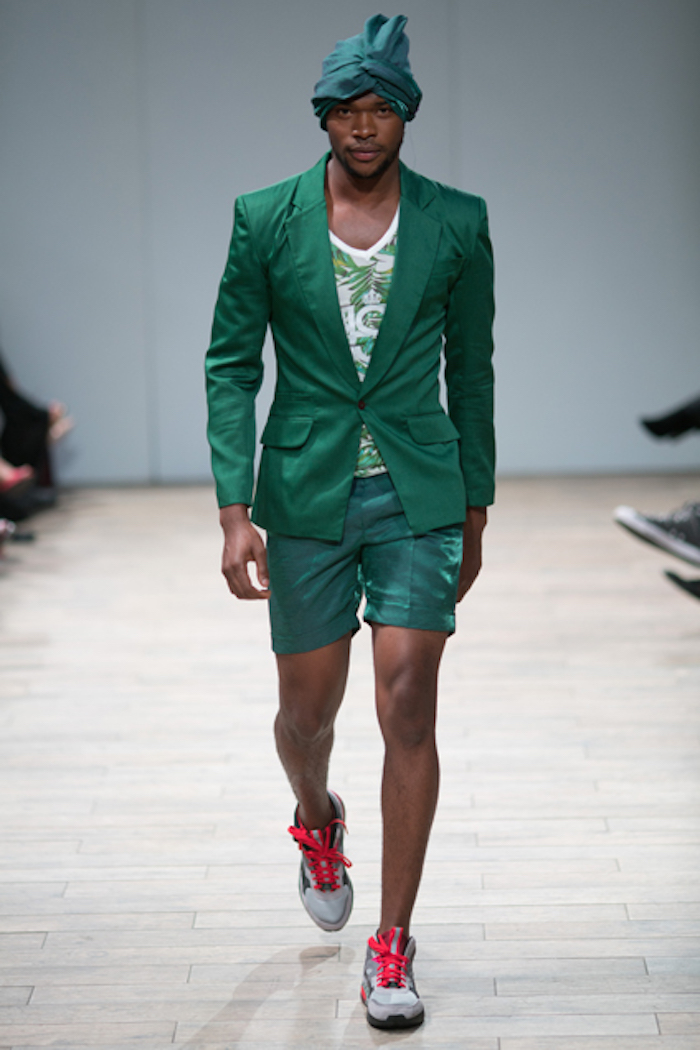 Mxolisi Mkhize’s mother had a huge influence on his clothing, ensuring that he always looked smart and presentable. She introduced Mxolisi to various brands that opened his eyes to the beautiful world of fashion. His love for fashion and style took new heights when he decided to teach himself the craft of tailoring and fashion design. His passion drove him to make his own outfits for himself. This interested his peers, who wanted the same type of style that Mxolisi depicted. HSL (House of Saint Luke) essentially comes from Mxo’s middle name ‘Luke’ and ‘House’, and is the perfect embodiment of his aspiration to not only own his fashion house, but to make it a fashion and style empire. 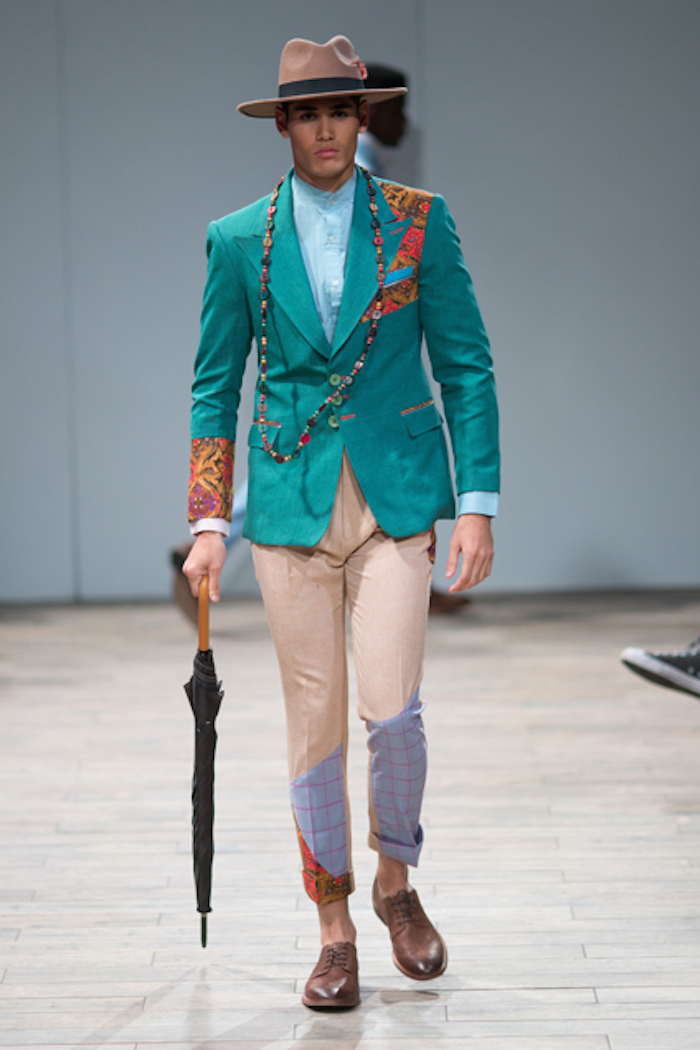 Zamaswazi Mathole is a self-taught designer that learnt to sew on his mother’s old dusty machine. Raised by an unemployed single parent as 1 of 5 children, the only time he would receive new clothes was when his mother bought his school uniform. Otherwise, he took his siblings’ old garments and redesign to make something for himself to wear. Times were so tough that at one point that he stole his mother’s table cloth and made a shirt out of it. ‘In 2013 with the little knowledge I had, I started taking design seriously, to a point where I began doing alterations for my neighbours. This led to actually starting to believe in myself, that I can do more than what I was doing. I started tailoring and designing outfits for matric dances, and that grew to wedding outfits. That was the time where I started the self-entitled brand ZAMASWAZI – Inventive Fashion. It was inspired by my journey growing up making something out of nothing and reviving the old to the new.’ 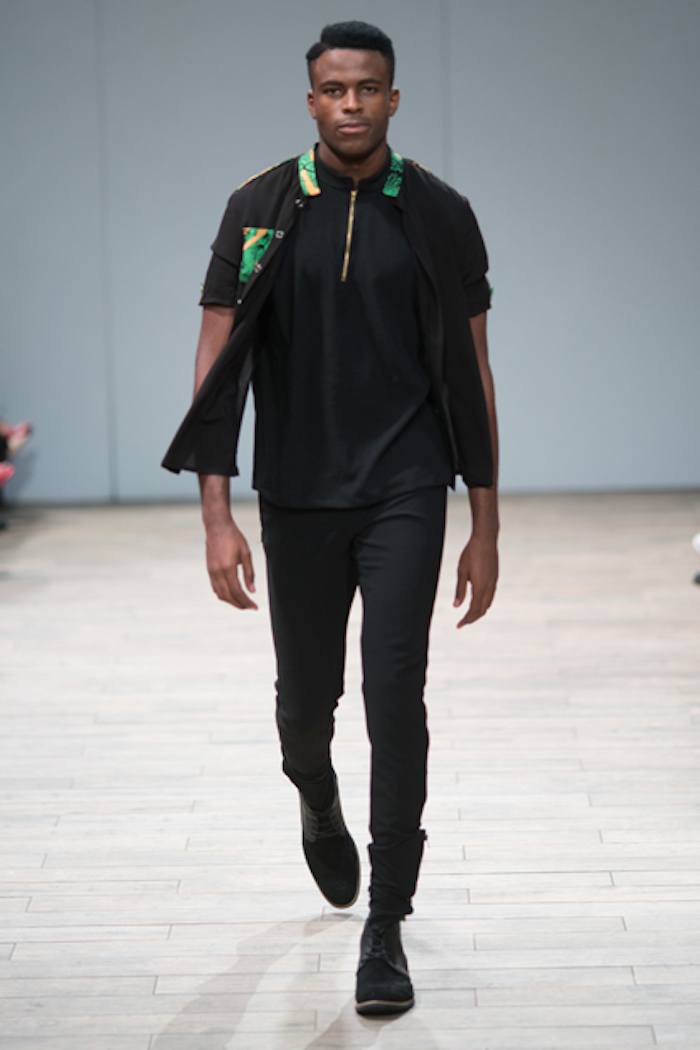 Vanessa Pillay studied fashion design at the then ML Saltan Technikon, where she immersed herself in the clothing industry for nearly three decades, learning with each step closer to her goal. From being a pattern maker to playing a key role in mass production, Vanessa decided to ‘step out of line’ and go her own way. She describes her design philosophy as clothes for men and women with attitude. Her style combines perfectly tailored and well-fitting garments made for the individual. Hombre is young and edgy – with equal parts style and attitude. 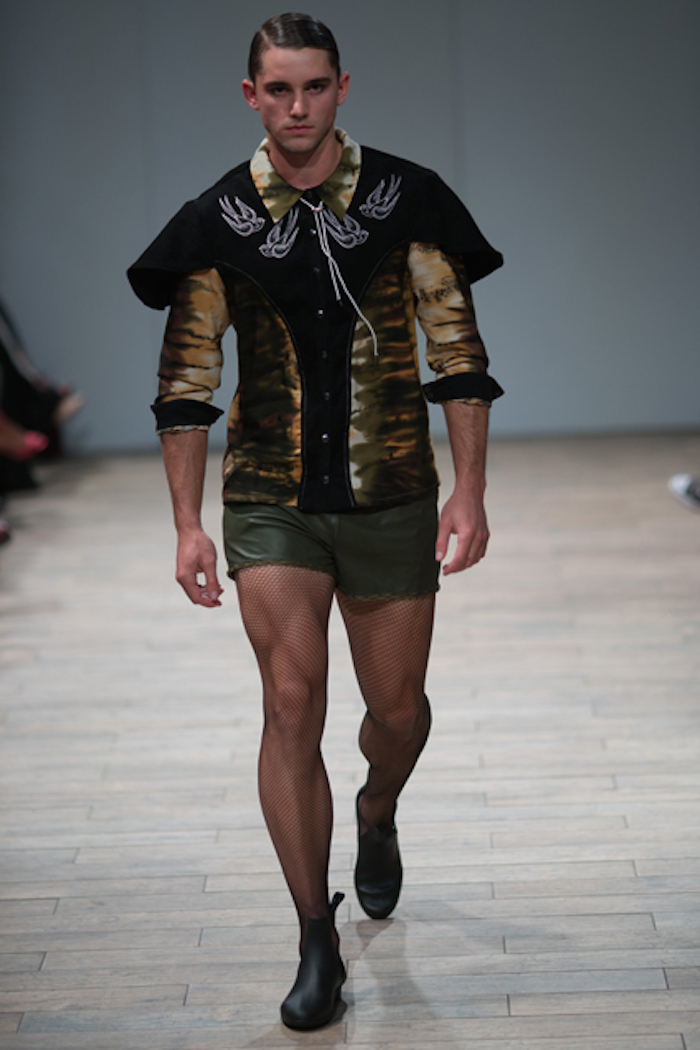 In 2014, Martelle Ludik graduated from LISOF with a BA degree in Fashion and started his label. Before he interned and worked for designers such as Marianne Fassler, Suzaan Heyns & Roman Handt. The Martelle Ludik aesthetic, has a strong street influence. The ready-to-wear brand focuses on giving consumers bold conceptual classics; be it in the fabric, silhouette or the entire look of the garment. With dark undertones and rebellious nature, the brand caters for the risk taker. Concepts revolve around differentiation and the idea of individuality. Everyone out there wants to be different, without having to fight people for who they are or who they want to be.
Martelle-Ludik 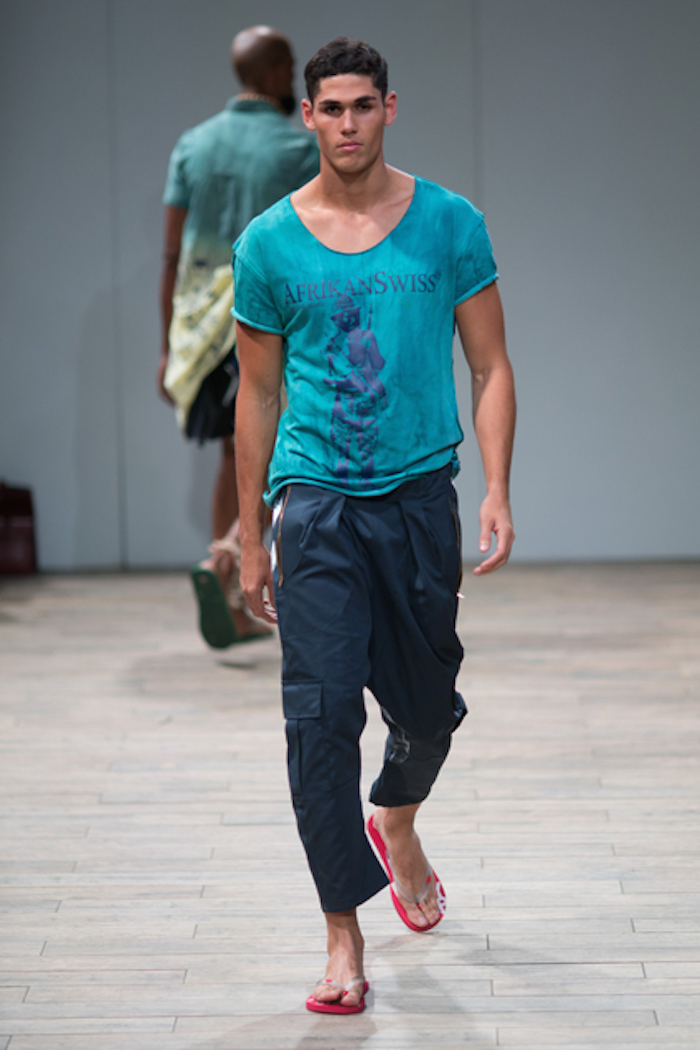 AfrikanSwiss by Thato Mafubelu Matabane was establishment in 2006. Thato started out as a visual merchandiser for Woolworths, and then delved into fashion business while working as a menswear designer and operations manager for House of Ole. Through lifestyle and fashion, AfrikanSwiss celebrates, embraces and reclaims African pride. The AfrikanSwiss client wears their heritage without compromise. 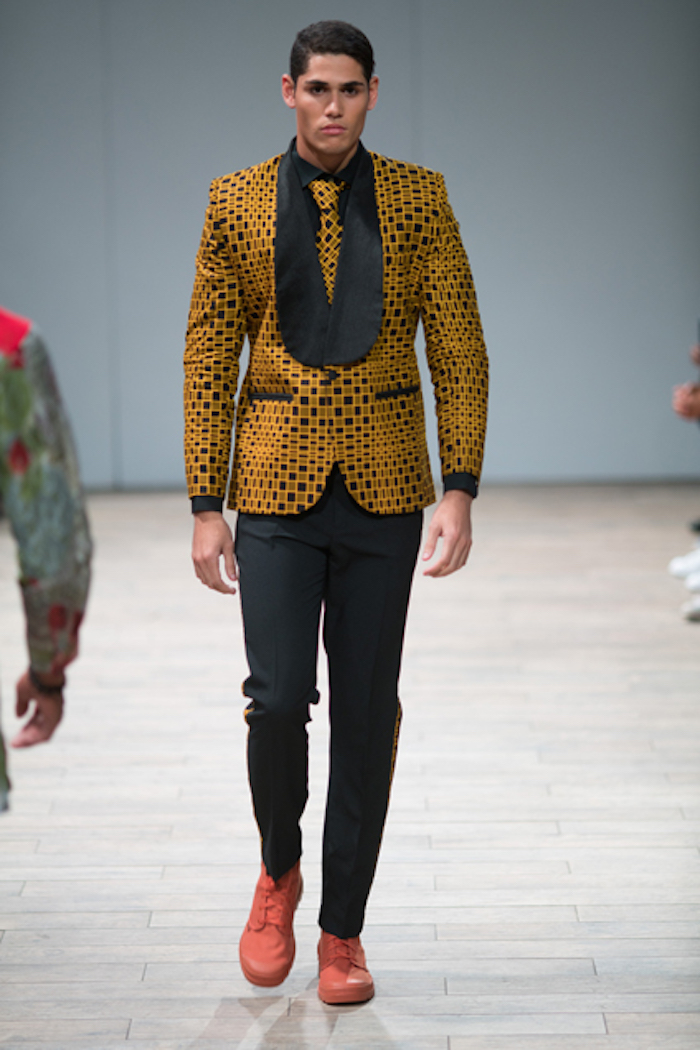 Chiza ngulube is the creative director of Esnoko, based in Lusaka, Zambia. For over16 years ESNOKO prides itself in making fine quality men’s bespoke tailoring using fine African prints and fabrics. ESNOKO also creates men’s accessories such as belts, shoes, ties and bags. 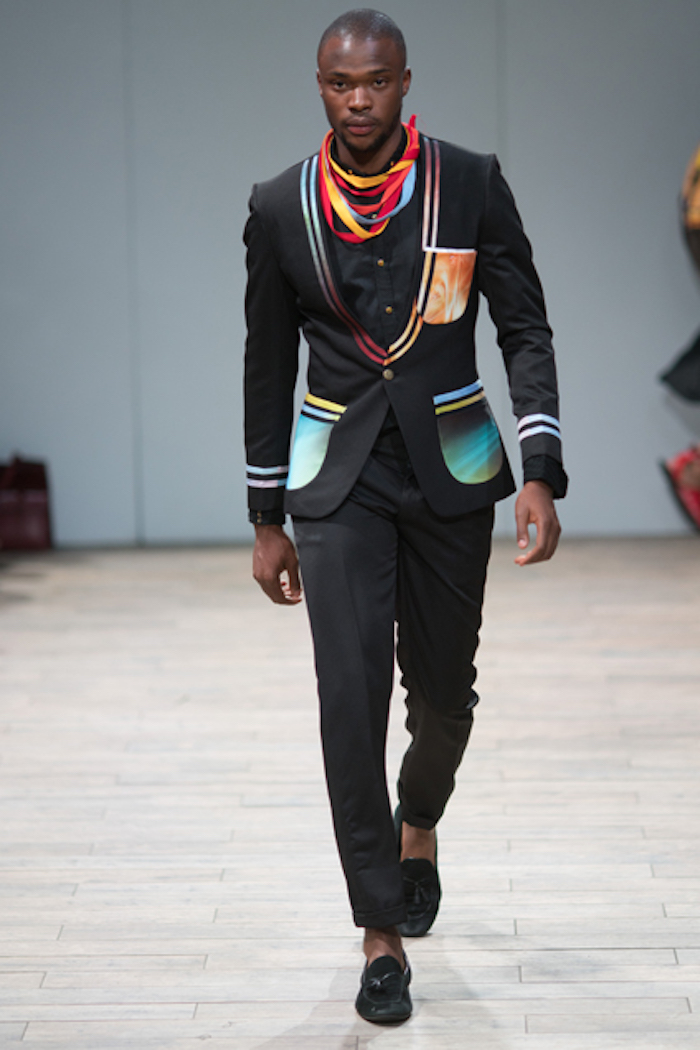 ToVch is a valiant and fashion-forward brand, designing premium, sustainable and wearable day-to-day pieces. The label was founded in 2010 by Thabo Khumalo, who is a young, self-taught fashion designer and entrepreneur from Zola, a township in Soweto. From the age of eight, Thabo would steal his mother’s sewing machines to redesign the clothes that she had bought him – until his mother bought him his own machine. That’s when he realized that he had a talent to create, and how in-demand his skills were in his home of Soweto. In 2014, Thabo entered the SA Fashion Week Scouting Menswear Competition and became the 1st runner-up. He has since been showcasing on the SA Fashion Week runway. Inspired, fascinated and schooled by the street fashion and Generation Z, ToVch understands that streets are the new fashion runways. It is a trend driven and seasonally independent, locally made clothing line catering for the fashion forward, dapper yet street conscious men. ToVch imparts a feminine touch to menswear and brings masculinity to feminine dressing. 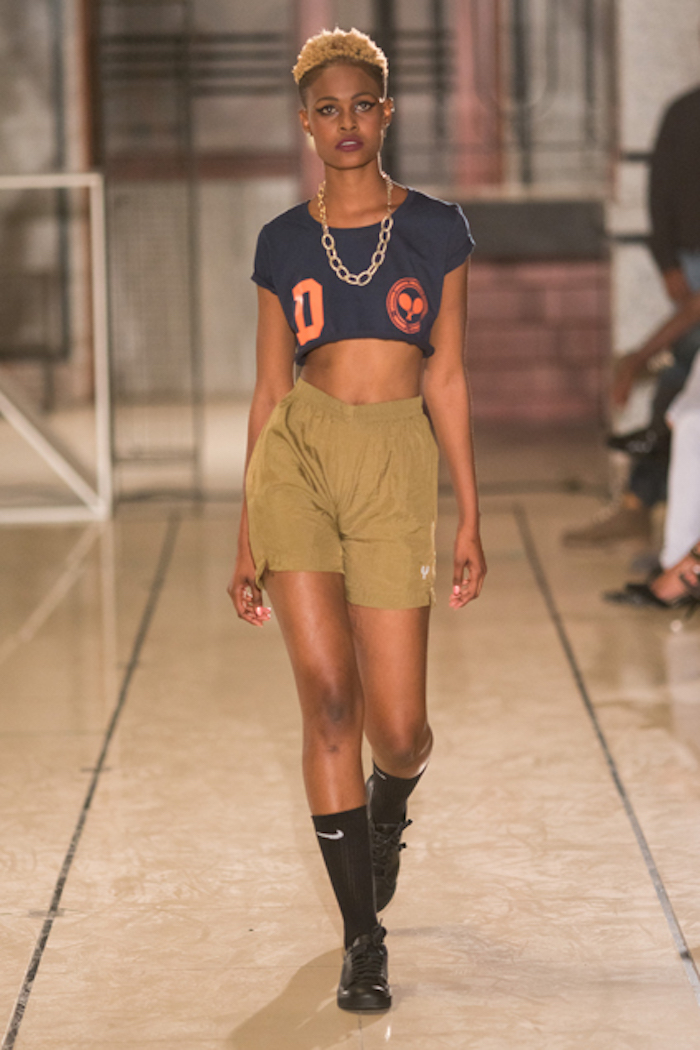 Andile Cele, affectionately known as ‘ScotchisDope” in the streets of Jozi, was born in uMlazi – a location in the south of Durban. He is a self-taught multi medium artist, and has previously worked in the fashion industry, in both Africa and Europe. In April 2009 he launched his first project, DOPEstore which is a conceptual lifestyle department store. Andile had his first ever show at SAFW in 2015 with successful results. His entire execution of the show was in itself experimental, as he opted to use real street fashion influencers, rather than models. The models used, were a collection of his peers and iconic individuals who all come from the ever changing street fashion scene. 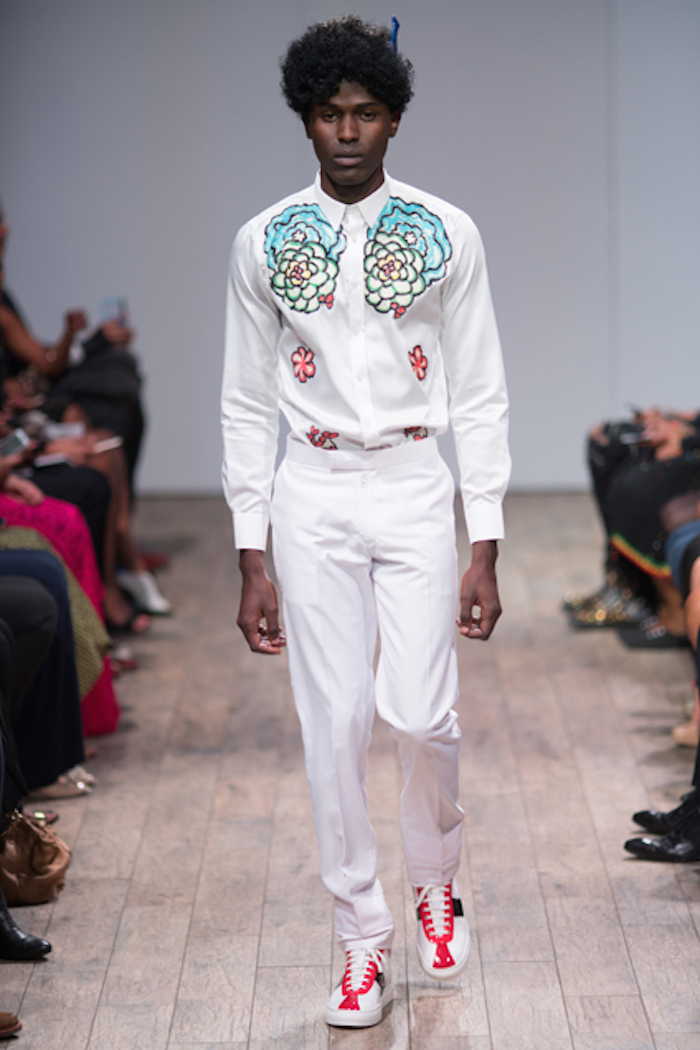 Ephraim Molingoane started his career in modelling, before re-routing himself into fashion design. He worked extensively abroad, before returning to Johannesburg and opening the Ephymol studio. His diverse travel experience played an important role in influencing his bold and individualistic design philosophy. Ephraim has earned numerous Best Dressed awards, which have increased his clientele to include sports personalities, musicians, actors and many leaders in the fashion industry. Shoes sponsored by Europa Shoes.

HO– USE OF OLE 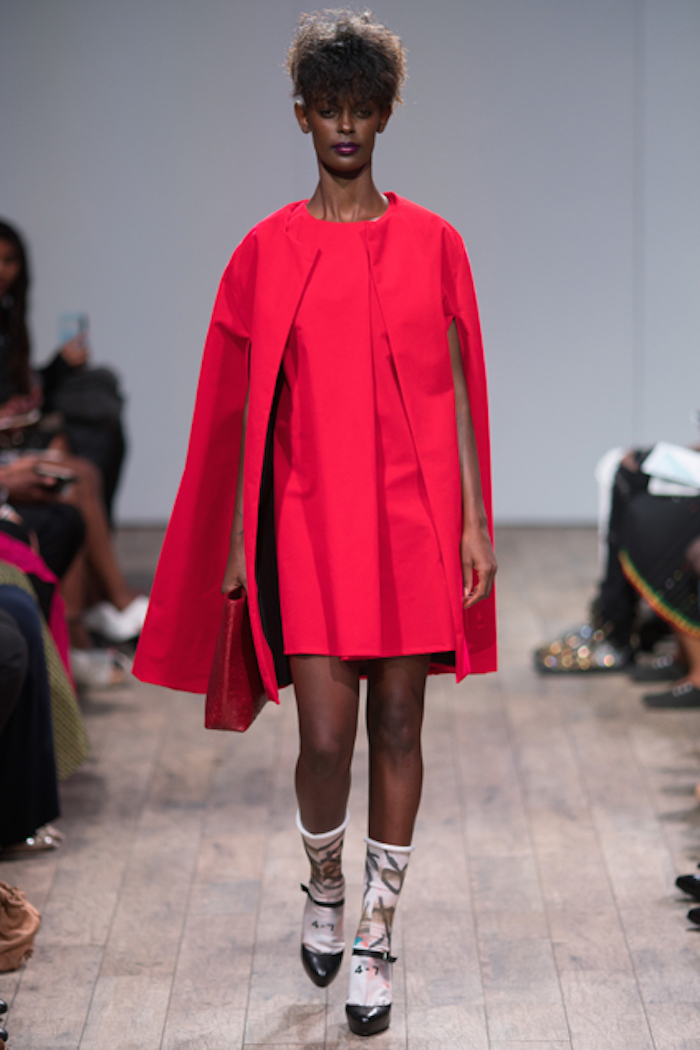 Olé Ledimo, known for his Saville Row-style class-cut suits, was born in Bloemfontein, and studied at the London University of Fashion before doing a course in Advanced Tailoring. The House of Olé brand came to life in 2000, and later opened his first studio in Johannesburg in 2006. Classic with flair has become the brand’s signature, focused on tailoring with a conceptual, fresh approach.
house-of-ole 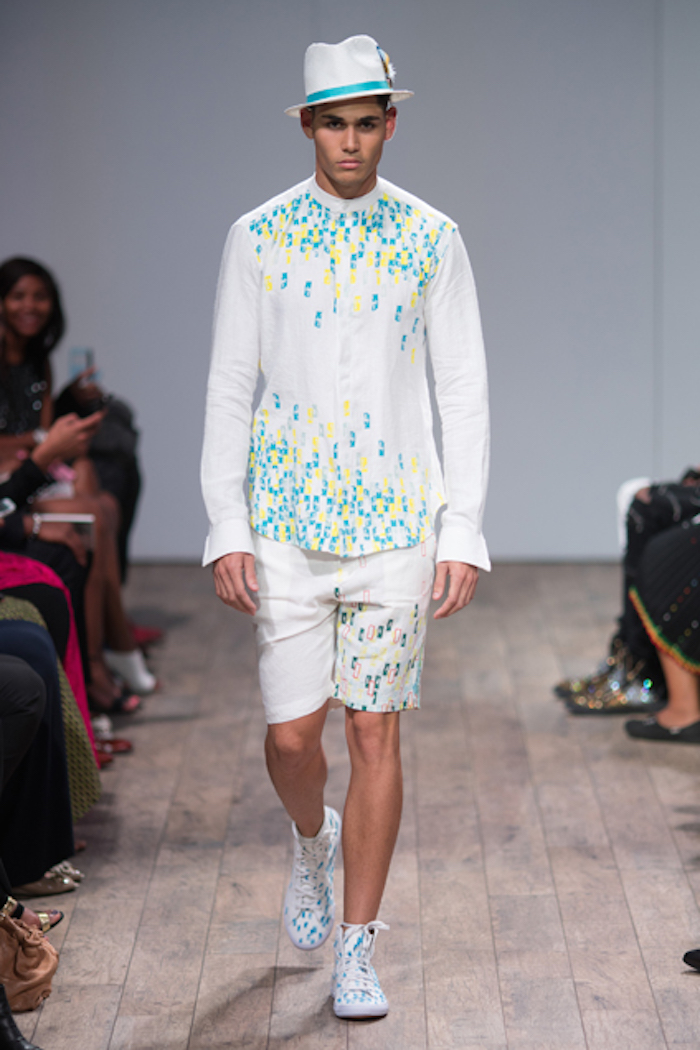 Shaldon Kopman, fashion icon, designer and stylist, founded the South African brand Naked Ape in 2005. From their studio in Johannesburg central, Naked Ape has designed and crafted luxury bespoke garments for discerning individuals. In the latter part of 2014 dawned the extension of the Naked Ape brand – a flagship store in the trendy and fashionable shopping district of Rosebank, The Firs. Naked Ape has extended its line-up to include ready-to-wear garments and accessories, bridging the gap between the individualised tailored items, with off-the-rack attire, resulting in immediate gratification.