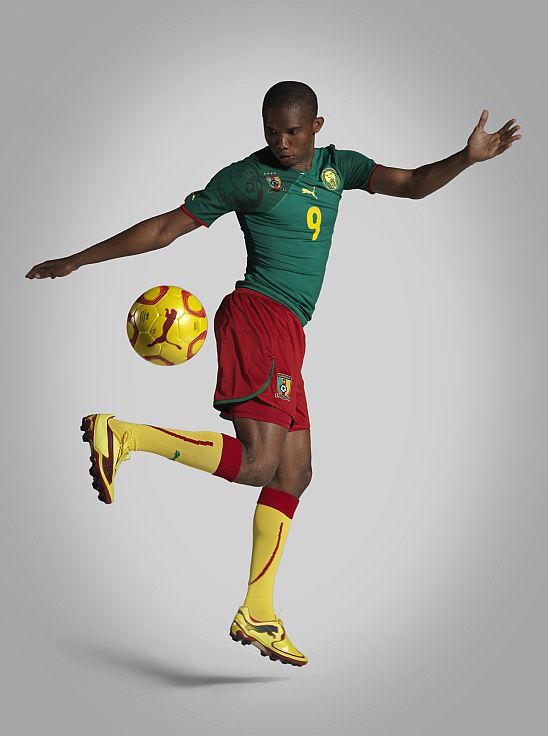 NAIROBI — German sportswear giant Puma on Wednesday unveiled a “unified African kit” the continent’s teams can use if their national colours clash during the African Nations Cup and World Cup finals.

Designed to help create awareness for the safeguard of the environment, the African Unity Kits were launched in Nairobi, where the German firm announced a partnership to raise funds for the United Nations Environment Programme (UNEP) to support the 2010 International Year of Biodiversity.

Cameroon star forward Samuel Eto’o, whose side is one of the 12 teams being sponsored by Puma at the African Nations Cup finals which start in Angola on Sunday, took part in the unveiling of the new uniform.

Eto’o, along with the rest of the Cameroon squad arrived in Nairobi on Tuesday(1/6/10) for a nine-day pre-Nations Cup training camp before travelling to Luanda.

Puma chief executive Jochen Zeitz said the use of the kits had been approved by FIFA as a third kit which can be worn when there is a clash of uniforms between competing teams during the Nations Cup and the World Cup.

“In 2010, Africa will be at the centre of the footballing world. Puma is creating a unique kit embracing the diversity of African Nations teams while valuing the unity of players and supporters towards a common goal,” said Zeitz at a news conference.

“Biodiversity and therefore valuing and protecting all life on our planet is a huge issue, not only in Africa, but around the world. We are proud to partner with UNEP to raise both awareness and funds through the sale of Unity products,” he added.

The kit comes with replica jerseys in brown pantone colour which were created by mixing soil samples from Ghana, Ivory Coast, South Africa and Cameroon and matching shorts.

Zeitz said funds raised from the sale of the kits would go towards the support of biodiversity projects in Africa.

Vote for Fashion at the SXSW Interactive Festival