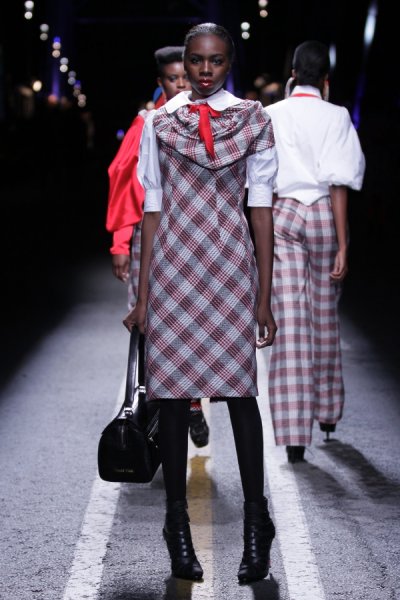 Phelora Elle, an American of Haitian heritage, kept getting rejections from modeling agencies here in the States when she approached them for representation. As is typical, she got everything from “lose weight” to “your features are too strong.” Compounding her rejection was her height of only 5ft 10.5inch and of course being a black model in New York city where the competition is already quite fierce.

“I always told my mom I wanted to be a model but we went to an agency and they wanted money for photos and my mom couldn’t do it at the time so I couldn’t sign with the agency, I was heartbroken but my dream to be a model never died,” said the young model.

Not giving up, although heart broken, Phelora began emailing her model photos to model agencies in London and South Africa. Someone finally responded. It was an agency in South Africa. “I was sooo happy, I didn’t know what to do, my manager/mentor and I already saved up money in case we got a yes and once we checked out the agency, he put me on a plane and to Cape Town South Africa I went,” continued Phelora.

Phelora signed with South Africa’s Base Models in Cape Town and the rest, as they say, is history. Since signing with Base models, she has completed a campaign for Woolworths Jeans, did some editorial print ads for Edgars in store magazine, Jet Club in store magazine, a commercial for Peugeot Cars; and just completed an eight page spread in Seventeen Magazine South Africa for its March 2011 issue. Of course this past week, we saw Phelora everywhere on Joburg Fashion Week’s runways. She walked for Suzaan Heyns, LISP, WILD FIG, Abigail Betz, Grapevine, Bongiwe Walaza, Thula Sindi, Tart and David Tlale.

“I was so excited walking for all of these designers but I was also very tired but felt very blessed. I was blessed to walk for everyone but I was a part of history during the last day of Joburg Fashion week because I walked for fashion designer David Tlale on the Nelson Mandela bridge and that was the first time a fashion show was ever done on the Nelson Mandela bridge and I wanted to do my best.”

The moral of the story for us to kick off our week: never ever, ever give up on your dreams. The impossible is possible.