The Call for Entries went out on the 30th of June 2011 and by the 25th of July when the team of judges set out for Port Harcourt, thousands of entries had been received from hopefuls residing in the Garden City.

Amolegbe described the Port Harcourt experience as “an eye-opener”. Speaking after the auditions, she said: “It was truly impressive to see the level of creativity that pervades in the South South. In Nigerian fashion today, the biggest names in the industry all reside in Lagos. The other judges and I, after today’s experience, are convinced that platforms like the MTN LFDW 2011 Awards are absolutely essential for the development and nurturing of fashion talent across Nigeria.”

On the 28th of July 2011, another team of judges moved to the Federal Capital Territory, where they again assessed future heavyweights in the fields of Nigerian fashion and design. Bisola Edun, one of the judges and a designer, Tae Woman said: “I commend the work of Omoyemi Akerele, MTN and British Council. In 2008, I won the British Council Young Creative Entrepreneur Award, and I can fully attest to the difference it makes in the career of a budding creative to be recognised by such noteworthy organisations. The British Council workshops I attended thereafter played a
very significant part in the growth of my ambition”.

Moving to Lagos on the 2nd of August, the final set of auditions was held at the British Council in Ikoyi. On the panel of judges were Folake Folarin Coker (Tiffany Amber), Uche Eze (BellaNaija.com) and Ojoma Ochai (British Council Nigeria).

Omoyemi Akerele, Project Director of the MTN Lagos Fashion & Design Week, said after the Lagos auditions: “Lagos has produced by far the most impressive of the candidates we have seen. Whilst we want to ensure fair representation across the 3 different regions, it is however also very important that this platform remains credible, and produces a deserving winner.”

Omoyemi Akerele, who has served as a Fashion Consultant in the industry to companies ranging from True Love Magazine to Vlisco, Austria Advantage, MNET, Ultima Productions and more, called on the Nigerian government to go a step further in its support for fashion education within Nigeria. She said: “The will and passion to succeed was visible in so many of the bright, young candidates that presented themselves to us in all 3 regions. However where they fell short was in the practical application and realisation of their ideas. What dismayed the other judges and I was the fact that even amongst the Lagos candidates, a large majority of the most impressive contenders had actually been educated overseas.”

Omoyemi Akerele continued: “I feel even more strongly now that the Nigerian government needs to provide more support for fashion education and training in Nigeria. We need to ensure that our fashion industry continues to grow and to produce names and brands that can represent Nigeria beyond our shores.” 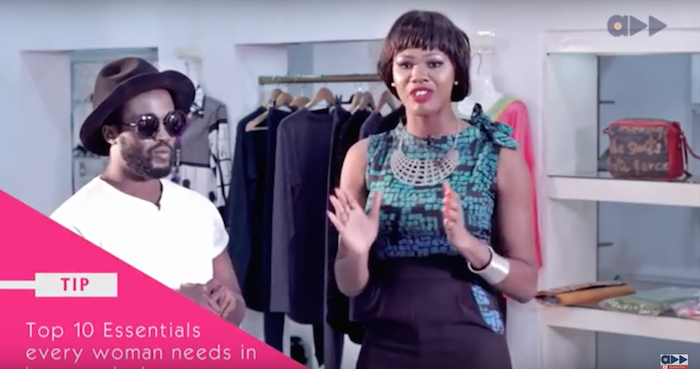 Fashion Fix: Watch The top 10 essentials every fashionable woman needs in her wardrobe with @MercyAjisafe