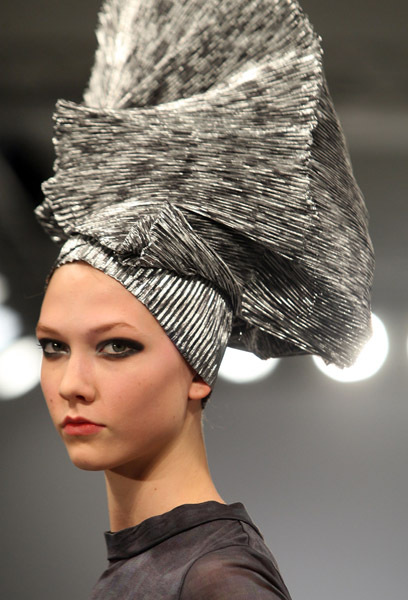 Fati Asibuela, the brain behind the Nigerian fashion label MOMO which showed at New York Fashion Week Fall 2009, is on a roll! Just completing New York Fashion Week, she headed to London Fashion Week to show another collection. While most of the clothing designs remained the same as what she showed in New York, she did something different with accessories.

The MOMO collection displayed a unique point of view that is very Nigerian, the gele, in a very “proper, proper” way. While Western designers such as Christain Lacroix in his Spring/Summer 2008 Collection took a good swipe at the gele,none, so far, have delivered the gele with the precision and regalness that the MOMO London Fashion Week Fall 2009 collection did. Also, for the Ladybrille Western woman who tends to wear regal stylish hats to upscale functions, particularly African-American and British Ladybrille women, it can easily blend into your wardrobes if you are looking to spice things up a bit.

Briefly, the gele is a head accessory [more like a cultural hat] that embodies glamour, power, royalty, regalness, chicness, sexiness and the beauty of the Nigerian woman. It is loud, colorful, creative and says, “I am all that and a bag of chips AND MORE. Whether man, woman, boy or girl, “don’t step to me unless you have a clear understanding of this fact.”” The fabrics used to make gele range from the traditonal locally made Nigerian textile, the Aso Oke [a hand loomed cloth woven by the Yoruba people of the South West], to damask, taffeta and organza. These fabrics are stiff because the gele stands tall and elongated above the heads of many. In certain instances, depending on the wearer, the gele can have the effect of a 5inch stillettos as it is a really exaggerated elongated look. “Umbrella,” “Ceiling Far,” “Human Diesel,” “Satellite,” “Overload,” “Boys Follow me” are some of the unique names associated with the gele and its varying heights.

There is no logic to this so don’t waste time trying to figure it out. Just note the following: it is irrelevant that the wearer of the gele blocks the view of those who might be sitting behind her at an event, infringes on the space of those beside her or worse, block the view of a driver if she is sitted in the back of a car. What matters is that the gele is skillfully, artistically and pridefully placed in all of its glory, color and majesty on the head of the Nigerian woman.

While young Nigerian women are indoctrinated into the gele culture at an early age, tying the gele, nevertheless, remains quite a challenge. It almost has the same difficulty as tying the Indian sari both for young Indian and non-Indian women. This is probably why Momo’s gele pieces shown at London Fashion Week are unique as she retains the height and awesomeness that is the gele but appears to make it prepackaged where the wearer can just grab, place on the head like a regular hat and go. While we of course would prefer she use more traditional garments i.e. Aso Oke to help the crisis ridden local textile manufacturing industry in Nigeria, she nevertheless scores points by meeting the West halfway with latex and metallic fabrics that make it adventurous and playful for the Ladybrille Western woman seeking to be blessed with the majesty and awesomenes of the gele.

Renowned Nigerian artist Lagbaja captures the essence and at times outrageousness of the gele.