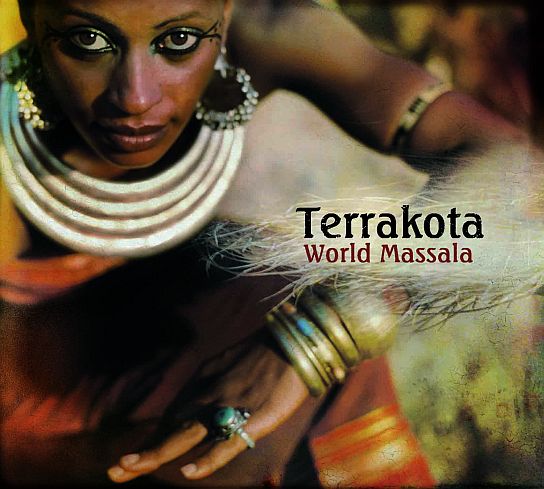 “If one says Lisbon, one thinks fado. Well, think again because here comes Terrakota, the leaders of the worldfusion scène that is developing in Lisbon. Terrakota and tens of young bands form the up-and-coming ‘musica mestiça’ scène are coming along with the rising cultural diversity influenced by immigrant populations, and musicians, from the ancient Portuguese colonies Angola, Cape Verde, Brazil, Guinea-Bissau and Mozambique. Lisbon is changing. The ‘cidade do fado’ is being more and more open and multicultural, and no one better represents that cultural diversity than Terrakota.

Terrakota was born in 1999 after a three month journey in West Africa that brought Junior, Alex and Humberto to a small neighbourhood of griot musicians and dancers in the town of Bobodioulasso, Burkina Faso. Everything was there: the vibrant colour of terracotta, the houses, the roads, the earth… Back in Lisbon, they recorded a demo and added three musicians: Davide, a drummer, Francesco, an Italian bass player, and Romi, an Angolan singer and dancer with tremendous potential.

Right away the band made a big impact on the musical scene in Lisbon. They managed to organize and produce their own concerts in the culturally small-minded Portuguese capital. The obstacles to face where numerous, but the band’s live power and energy captivated the public’s attention, winning the respect of the public. A new musical seed had been planted, in fertile African ground, bathed in Jamaican, Arab, Brazilian and Indian sunlight.”

Read and listen to the great music of Terrakota on MySpace.

Meet us at WOMEX

More dates to be confirmed soon!

Banky W Makes the Cover of Y! Magazine – Reveals Battle and Victory Over Cancer and new Fight for Nigeria!