Home / Events / Lace Up, Save Lives: Nike and (Red) Unite to Leverage the Power of Sport to Fight HIV/AIDS in Africa
Share 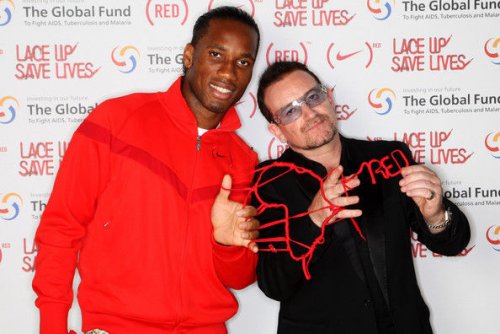 November 30th, 2009 just a day before World Aids day, which is today, some of the world’s best footballers joined Artist Bono at an announcement of the partnership between NIKE, Inc. (NYSE:NKE) and (RED).

In a press release sent by the duo companies, they explain,

“This unique partnership delivers a two-pronged approach to fight HIV/AIDS in Africa by delivering funds to support programs that offer education and medication on the ground and will harness the power of sport to engage youth around the world in the fight against AIDS in Africa.

In making the partnership announcement, Mark Parker, President and CEO of Nike Inc., Susan Smith Ellis, CEO, (RED) and Professor Michel D. Kazatchkine Executive Director of the Global Fund to Fight AIDS , Tuberculosis and Malaria were joined by footballers from around the world and U2 vocalist and (RED) co-founder Bono, to emphasize the need for global action and participation to eliminate AIDS in Africa.”

“The fight against AIDS in Africa needs great brands to drive awareness and engagement,’ said Susan Smith Ellis, CEO, (RED). ‘Nike is the right partner to connect education with sport, and in so doing help drive social change, prevention and understanding of HIV/AIDS. We are thrilled to have them with us.”

Nike has a proven history of elevating global causes to create consumer awareness and participation. ‘As a global brand and creative company, Nike can play a role in amplifying this important issue,’ said Mark Parker, President and CEO of Nike Inc. ‘With football as the catalyst, Nike is joining the (RED) movement to fight HIV/AIDS in Africa.’