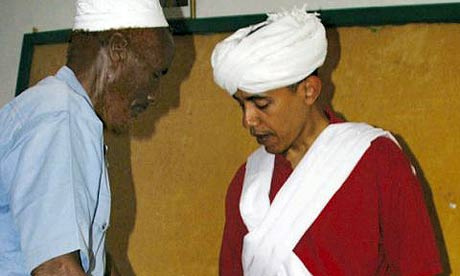 This week, fashion politics takes center stage in contentious battles. In the USA, African clothes worn by Senator Obama, while he visited Kenya in 2006, became the focal point of much heated debate as Drudge Report, a famous site for political junkies, published a picture with Senator Obama draped in Somalian African clothing. Drudge explains Senator Hillary Clinton’s camp was responsible for releasing the picture to them. Senator Clinton has since denied the allegation. The point of the picture was to show Senator Obama as a Muslim which would scare Americans as they would conclude a man with the name “Barack Hussein Obama” who also wears head Turbans synonymous with Islam/being a Muslim is a bad idea as President of the United States of America.

The contentious debate over Senator Obama’s turban cast a negative light on the African garments and needless to say sent & sends a mesage to many Americans that visiting African countries, with such Muslim garments and wearing the garments, is problematic.
A message that, in my opinion, is offensive to the African nations that offer their hospitality and respect by honoring American visitors with their clothing.

While Americans argue about the “Muslimness” of a candidate based on the African clothes they wear, a different and hot debate on “Indecent Dressing” takes place in Africa. For right now, it centers in Nigeria but make no mistake about it, India, Arab and other African countries have had to deal with the question of indecent dressing, time and time again. We wrote about this issue back in August of 2007. There are several articles covering the current proposed legisation in the Senate. A good article is the one by AllAfrica.com. If you are the type that likes to look at the actual language of a proposed bill/statute, you can click on the scanned images of the statutes below courtesy of Naija blog to see the wording of the statute.

The stated legislative intent behind the statute is to “prohibit and punish public nudity, sexual intimidation and other related offences in Nigeria.” Public nudity is defined as a state of nakedness in the public or open; or state of indecent dressing in the open or public which exposes the following body parts of a human body:

I don’t doubt the intentions of the author of the bill, Senator Eme Ufot Ekaette, is positive as seen in the rest of the whole bill, especially in areas focused on professors demanding sex from their female students. I, however, think the statute overall is overbroad and vague, especially as to the definition of what constitutes “indecent dressing.”Also, the statute carries an imprisonment sentence of six months for failure to comply with its provisions, a steep penalty for violations of unclear rules that can only be enforced arbitrarily in an already very corrupt society.

The obvious constitutional arguments have been made. See the All Africa article linked above. Several questions, however, spring into my head on this proposed legislation. The part about the exposure of a female breast 14years and above and her laps. Is this an acknowledgement that Nigeria’s culture and society has changed drastically to adopt mostly Western notions of nudity? Growing up in Nigeria, I observed women, particularly the poor and uneducated expose their breasts as they go about their daily tasks of cleaning the house, breast feeding e.t.c. In addition, cultural outfits worn by the Hausas[Northern Nigeria], the Calabars [Eastern Nigerian] usually expose the waist/belly buttons and at times the laps. Does it mean Nigerian society is now sexually alert, for lack of a better word, that these cultural norms are to be discarded?

Independent of the constitutional, cultures and norms arguments, I also wonder if the interference of contractual relationship argument can be explored.

Fashion retailers including market women are responding to the demand of certain types of clothes in the marketplace be they tube tops, mini skirts, halter tops, shorts and what have you. There is a demand and thus prohibiting the wearing of such outfits is essentially interfering with the freedom to contract and engage in contractual relations in the market place. Obviously, this argument hinges on Nigeria being a democratic society, which it is, and it embracing capitalism, which I am not so sure it has truly embraced. In any event, what are your thoughts? 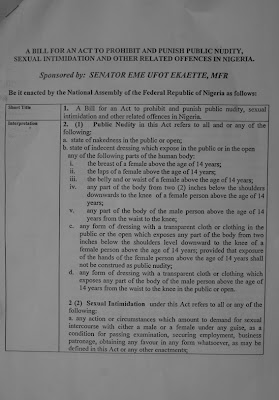 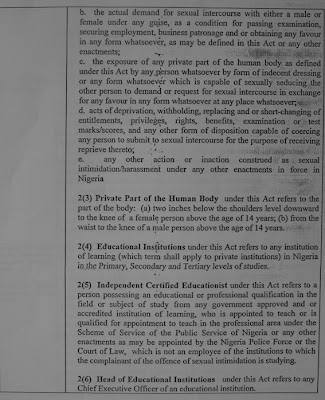 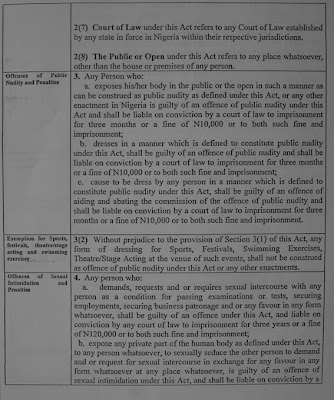 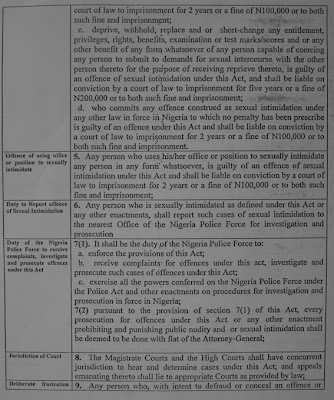 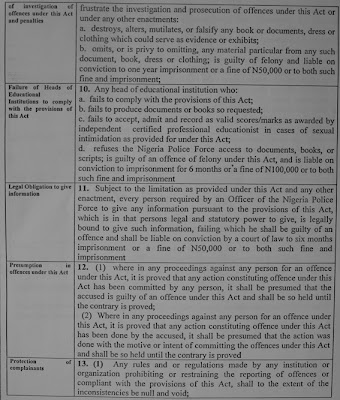 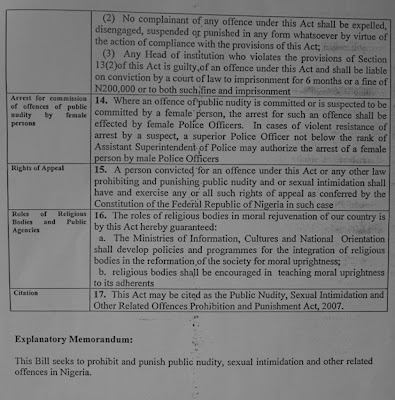