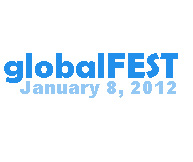 “globalFEST, the New York-based gateway festival for revelatory global artists, had a problem. For one night every January, the festival’s organizers—Isabel Soffer of Live Sounds, Bill Bragin of Acidophilus: Live and Active Cultures, and Shanta Thake of Joe’s Pub at the Public Theater—gather high-caliber musicians from around the world, artists prepared to showcase their music in order to build their North American touring careers. They attract diverse, enthusiastic presenters from across the country, in town for the annual Association of Performing Arts Conference (APAP), who are increasingly eager to book unexpected, engaging sounds. They garner major press coverage, often the first national—or even first English-language—media attention for festival performers.

But obstacles to spreading the music remained. A particularly daunting one: The cost for many large international ensembles to tour in the U.S. is prohibitive. Complicated visa expenses, transportation and hotel costs, and sky-high baggage fees mount before musicians have even played a single show.

Enter the new globalFEST Touring Fund (gFTF), a unique program and part of a generous grant from the Ford Foundation to support the festival and its mission of cultivating the world music market by showcasing tour-ready artists and expanding world music audiences.

“We’ve done a great job at stimulating the market and creating interest in global music, by focusing on artists who are new to the field or ready to leap to a new level in their careers. From the beginning, we’ve focused on expanding the numbers of presenters interested in world music, which helps build a stronger touring base,” notes Bragin. “But there remains a gap between that interest and the real costs of touring, between presenters’ fees based on their local market realities and artists’ actual touring expenses. Now, with the globalFEST Touring Fund, once artists create demand, it will be easier to fulfill a tour. It’s helped us return to the roots of globalFEST, which is about bringing more world music to more communities.”

With the support of the gFTF, artists can bridge this gap and reach new markets. All past and present globalFEST performers will be eligible to apply for a competitive grant for reimbursement of qualified touring expenses, helping to defray the costs of coming to and traveling within the U.S. Artists will have two opportunities to apply for funding. The gFTF will require artists to hit at least one new market during their tour—a club date, festival appearance, concert, or industry showcase —thereby spreading the festival’s impact throughout the country and year in a significant way.

In addition to supporting the establishment of the gFTF, the Ford Foundation’s grant will also allow globalFEST to help artists cover the cost of performing at the festival itself for the next two editions, as well as allow the festival to establish itself firmly as an independent, non-profit organization. Invited artists have always supported their own showcases, raising and investing their own funds for travel and non-production expenses. For the first time, globalFEST will now be able to offer modest stipends to help reimburse artists and offset some of these costs.

Since its inception, globalFEST has been a volunteer-run, showcase festival that has relied primarily on ticket sales to cover its costs, augmented by an annual grant from its founding partner, the Cultural Services of the French Embassy in New York. Starting last year, and continuing this year with a launch on October 3, globalFEST has appealed to its fans to help support the event and maintain its low ticket price, through a crowdsourced funding campaign on Kickstarter.

“Now, globalFEST will be able to give back to artists in a more meaningful way and really show our support, not just through the festival itself,” explains Soffer. “This is something we wanted to figure out from very early on. We’re moving beyond a one-night event that has been incredibly productive for the artists and presenters, and can now create year-round opportunities that move forward our mission to build a diverse world music touring force in the U.S.”

The Future Awards Wants you to Get Your Green On!