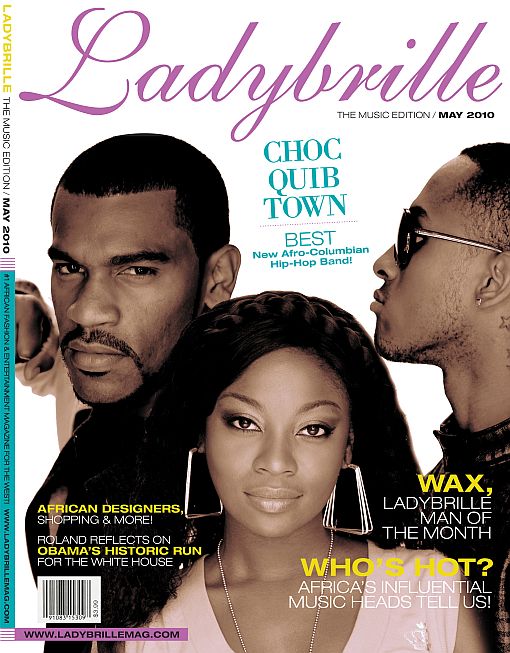 In May of 2010, CHOC QUIB TOWN made their USA debut on the cover of Ladybrille Magazine. At the time, they had been nominated as ‘Best New Act’ for the 2009 Latin Grammy. Four months after their debut in Ladybrille, the band was nominated, again, at the 2010 Latin Grammy. This time, for ‘Best Alternative Song’ for their song “De Donde Vengo Yo.” We are excited to report they WON last week Thursday! Congratulations to CHOC QUIB TOWN! Enjoy our republished EXCLUSIVE interview with the band from our May issue!

The State of Chocó, located in the Pacific Coast of Colombia, is among the poorest cities in Latin America with poor infrastructure, high iliteracy and one of the highest infant and maternal mortality rates in the world. Chocó also has the largest community of Africans, many of whom are descendants of African slaves. Indeed Chocó is often overlooked in Colombia’s national identity; but hip-Hop band Choc Quib Town is determined to help change all that by presenting a new side of Chocó through music.

Nominated at the 2009 Latin GRAMMY’s for “Best New Artist,” Colombia’s Choc Quib Town (CQT) fuses hip-hop, ragga, electronica and funk to produce fresh Afro-Colombian rhythms and messages that shine the light on Chocó. The band made up of Tostao, Goyo (female) and Slow who hail from the city of Quibdó in Chocó have made huge impressions across Latin America among music lovers and are slowly but surely gaining momentum with their U.S. debut album ‘Oro.’ Oro is a compilation of 16 tracks, 9 of which were previously released outside of the US and features some of their hottest hits like “Somos Pacificos.” LADYBRILLE Magazine caught up with the band, amidst its hectic touring schedule, to find out all we could about our Best New Afro-Colombian Hip-Hop Band!

LADYBRILLE: What’s the story on how you three met? Did any of you study music or was it just a natural thing you picked up?
CQT: We got together in Cali through a connection of both coming from a region called the Choco. In 2000, we officially formed Chocquibtown. Tostao had some musical education back in Quibdo, Choco. Slow and myself are brother and sister who were brought up in an environment where our mother was a singer and our father was a music collector. Our uncle was a music director and founder of the legendary Colombian Salsa Orquestra Niche. The group was formed in the City of Cali. We began writing lyrics providing a bit of each one of us or trying to represent what we think and our experiences. We write about what we were living through at that moment and our thoughts on displacement, also about politics or our land. We then began performing at festivals and different events with other artists. We give the public an unforgettable performance!

LADYBRILLE: We will get into your music soon but I’d like to explore, for our audience, the uniqueness of your name. What is the history behind the group name and why did you choose Choc Quib Town as the band name.
CQT: Cho, Quibdo is Choco’s capital. We chose “town” because it is our town and it’s a homage to our land and our people.

LADYBRILLE: Speaking of paying homage to your land and people, you say Choco is like Africa in Colombia. What do you mean by that?
CQT: We do have a lot of African influence in our music especially in our percussion. We have African instruments such as the Balafon, and the Colombian Marima de Chonta. We try to mix rhythms from the pacific coast that are consisting of typical percussion from this region like the cununos, the bombo, and the marimba in our music. Those instruments aren’t African but they’re pretty similar.

LADYBRILLE: I am fascinated with the African heritage of the Choco people. I know you three are influenced by music from across the world but specific to the African continent, who are some of the artists or African music that has influenced you?
CQT: We’re influenced by a variety of African music and artists like: K’NAAN, daara-j, and Cesarea Evora. There are definitely hip-hop artists that have heavily influenced us as well like Afrika Bambaata, Mos Def, Talib Kweli, Q-Tip, The Fugees, Lauryn Hill, Wyclef Jean, Bob Marley, and his children’s music. Of course we’re also influenced by local artists from the Pacific like: La Contundencia, Saboreo, Zully Mrillo, Bahia Group, Socavon, and many more.

LADYBRILLE: There is a big reawakening of African rhythms and sounds in music, globally. What do you think is driving this renewed interest?
CQT: People have been listening and see the same thing over and over again. People are searching for new things and African-influenced sounds always catch people’s attention.

LADYBRILLE: I also hear salsa, reggaeton, hip-hop and so many other influences. How would you describe your music?
CQT: The mixture of music has always resulted in categorizing and genres. We know we play urban music but we don’t have a specific genre for ourselves because we don’t always stick to just one style – maybe Afro-Colombian hip-hop? It’s a fresh new sound that doesn’t restrict itself with different rhythms that create some amazing beats.

LADYBRILLE: Socially responsible and conscious music is a big part of your message. Why?
CQT: We come from a town where it’s been exploited for its rich soil, which has made us to be a very poor country that has suffered a lot.

LADYRILLE: Let’s talk about your breaking into the USA market. Why the USA, why now?
CQT: The music industry is going through a crucial moment worldwide. Thanks to the internet, people have the opportunity to listen to what they discover and not only what the major companies put out on the market.

LADYBRILLE: Indeed. Who are you targeting in the USA with your music?
CQT: We want to reach out to every one of all ages and to the listener of every genre. We don’t limit ourselves to a certain scene. Whoever wants to listen to good music, listens to Chocquibtown.

LADYBRILLE: Let’s talk about your new album Oro. How long did it take to produce it?
CQT: It took about two months, more or less, for the production aspect of our album. It took about a year and a half for us to create the lyrics and the pre-productions stages of it all.

LADYBRILE: Did the music process come easy for you?
CQT: Yea, it is a natural process for us – it completes us.

LADYBRILE: I know you all are quite busy so let me give you my final two part questions. You were nominated at the LATIN GRAMMY in 2009 as Best New Act. How did that feel?
CQT: Great! It feels like you just graduated from school. It feels like you did well on your homework and they gave you a good grade. It’s something really special to us and all the people back home; that are proud of things like this.

LADYBRILLE: What advice do you have especially to young musicians that will read this article?
CQT: To fight for your dreams. Don’t play or create music just for approval but do it as the only form to share the true art form.

The Future Awards Wants you to Get Your Green On! 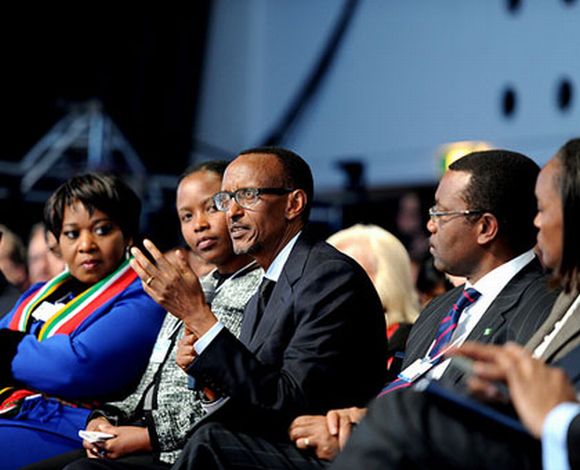