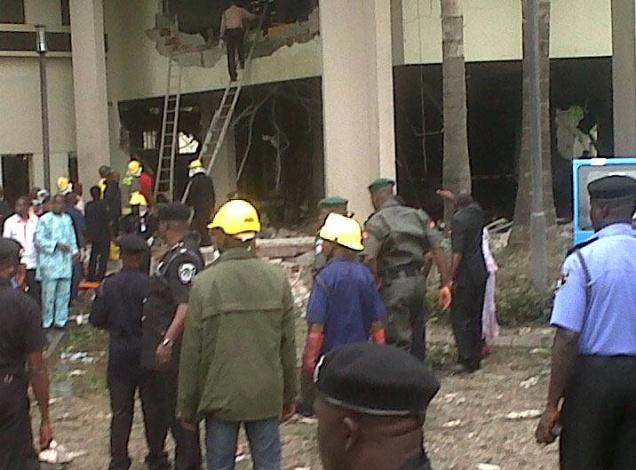 ABUJA (Reuters) – A car bomb ripped through the United Nations’ headquarters in the Nigerian capital of Abuja on Friday, killing at least 18 people, in an attack reminiscent of a June blast claimed by a local radical Islamist group.

U.N. Secretary General Ban Ki-moon said the final casualty toll was likely to be considerable, and Nigerian President Goodluck Jonathan ordered tighter security around the capital after what he called a “most despicable assault.”

Security sources and witnesses said the car rammed into the building and blew up, badly damaging parts of an office complex where close to 400 people normally work for U.N. agencies.

“We do not yet have precise casualty figures but they are likely to be considerable,” Ban said, adding that the building housed 26 U.N. humanitarian and development agencies.

“This was an assault on those who devote their lives to helping others,” Ban said in a statement to reporters. “We condemn this terrible act, utterly.”

Body parts were strewn on the ground as emergency workers, soldiers and police swarmed around the building, cordoned roads and rushed the wounded to hospital.

“Different people have been taken to different hospitals so we’re not sure of casualty figures. It is at least 18,” said Mike Zuokumor, Abuja police commissioner.

No one claimed responsibility for the attack. However, one Abuja-based security source suspected the Nigerian Islamist group Boko Haram, whose strikes have been growing in intensity and spreading further afield, or al Qaeda’s North African arm.

“This is very likely the work of Boko Haram and, or, AQIM (Al Qaeda in the Islamic Maghreb) and is a serious escalation in the security situation in Nigeria,” the security source said. “This is the worst thing that could have happened. . . ”  Read more on TPM