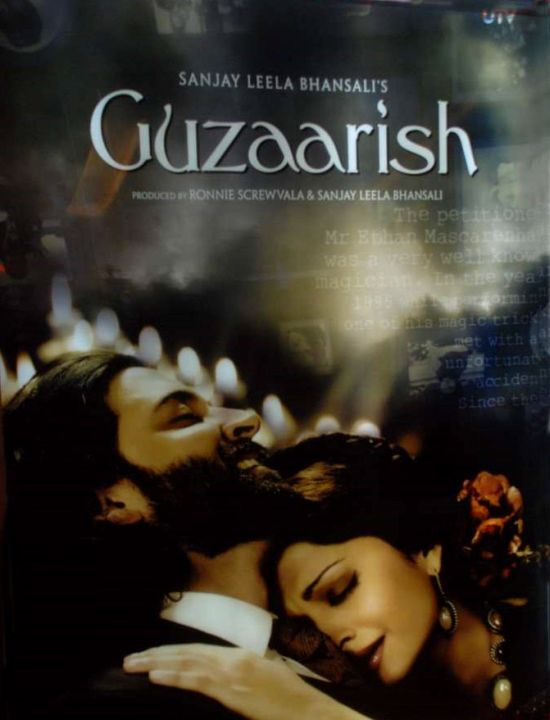 When Aishwarya Rai-Bachchan and Hrithik Roshan come together on screen, the effect is usually magical. Think Jodha Akbar, as an example, a must see for all our Ladybrille Bollywood fans. The latest from the dynamic duo is Guzaarish.

“The story is set in Goa, home to one of the most accomplished magicians of the time – Ethan Mascarenhas (Hrithik Roshan). As fate would have had it, Ethan is severely injured when one of his magical trick goes wrong turning him to a paraplegic. Confined in his own wheel chair Ethan’s will power only goes stronger and stronger. He becomes the Radio Jockey of an FM Station called Radio Zindagi. His show spreads magic and hope and laughter through his irrepressible wit and humor to every listener and caller, that it is difficult to imagine that this is a man who has been immobilized with a spinal injury for the last fourteen years of his life. Sofia D’Souza (Aishwarya Rai) is his nurse who has been accompanying him like a shadow for past twelve years. Ethan’s life centers on Sofia and they share a silent tacit love which is both beautiful and spirited.

However, at the fourteenth anniversary of his accident, Ethan decides to take matters to his own hands and files an appeal to the court for mercy killing.This leaves Sofia in an impasse that challenges their relationship and their love. Ethan takes the help of his best friend and lawyer Devyani Dutta (Shernaz Patel) to support his appeal. Devyani , a very practical person, understands Ethan’s appeal and agrees to his reasoning and decides to support him in his cause, as a result of which she is sensed as being callous by others. Surprising everyone with her stance Ethan’s mother Isabel Mascarenhas (Nafisa Ali) also supports him in his petition, backing her son’s demand as always. Though Ethan is consistently persuaded by his physician Dr. Nayak (Suhel Seth), a neurologist, to retract his case, he finally relents to Ethan’s appeal when he realizes that the friend in him is much stronger than the medic.

Alongside all the confusions, a young man named Omar Siddiqui (Aditya Roy Kapur) enters Ethan’s life with the sole aim of learning magic from him , whom he considers to be the God of magicians.Omar is earnest and driven by a passion to learn magic, hyper kinetic, quicksilver in his actions – an antithesis to his Ethan’s inertness. Impressed by his love for magic, Ethan agrees to pass on his legacy to Omar even as he fights tooth and nail to demand the most basic right to his own life.

The scenario takes an unexpected turn when Ethan’s past lover, and now a wife and a mother with a work of her own, Estella Francis (Monikangana Dutta) re-enters his life, to whom her relationship with Ethan is a tragic memory of past. She’s put her past behind her but is forced to revisit fourteen years later when she learns about Ethan’s decision.

The ethics, the morality, the cruelty and the kindness of Ethan’s mission causes everyone to be struck by a whirlwind of emotions scaling from enrage to sorrow.”

NOTE: Ladybrillemag.com has not reviewed Guzaarish.