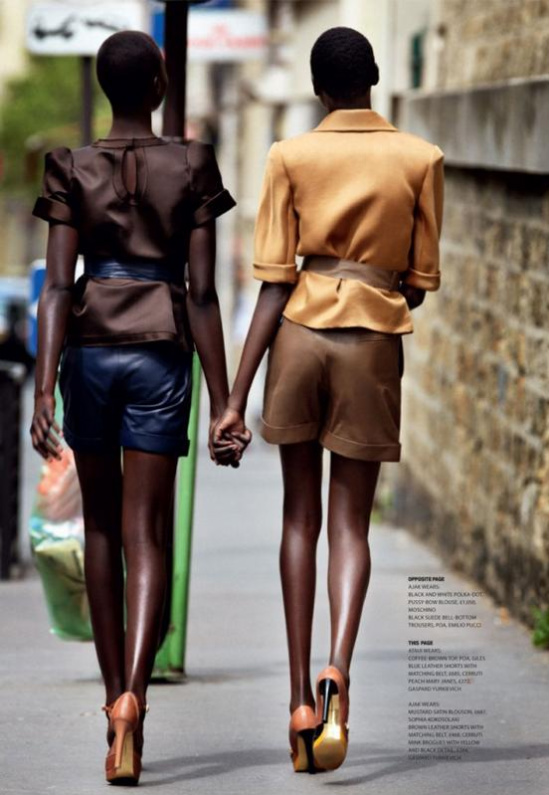 These are the new breed of African models taking center stage across the globe. They are the ones to watch!

1. Ataui Deng (Sudan): Sudanese born Ataui is signed with Trump Management New York. She immigrated to the states in 2004. In 2008, Ataui hit New York’s runways and she has never looked back walking in shows for designers such as Jeremy Laing, Kai Kuhne and Zac Posen.

2. Ajuma Nasenyana (Kenya): Ajuma whose real name is Nancy Nasenyana, was 4th runner up in the 2003 Ford Supermodel Search. From Capetown to Paris, New York to Milan, Ajuma has walked the runways, worldwide. A protégé of Kenyan model guru Tony Chirah, Ajuma’s future only holds a promising career like the big names (Liya Kebede, Alek Wek) who have gone before her.

3. Ubah Hassan (Somalia): Ubah made the cut for the historic Vogue Italia issue; which featured some of the hottest black names in fashion including Alek Wek, Tyra, Naomi and Liya Kebede. Ubah began her career with Click Management Agency in New York in 2007 and won the title for the model of the week on Models.com in May of 2008. She in 2010 featured in Ralph Lauren’s ad campaign and also made the cover of Arise Magazine’s February 2010 issue. She is with Women Management.

4. Kinee Diouf (Senegal): Gorgeous Kinee at 5’9.5 is currently signed with New York Models and d’Management. She has featured on numerous runways, prints and ads including that the United Colors of Benetton.

5. Ayan Elmi (Somalia): 5ft 11in Elmi is signed with agencies in New York and South Africa. She has worked with clients such as Jean Paul Gautier, Hermes, Gavin Rajah, Yahya and Foschini.

6. Ify Jones (Nigeria): Ifeoma Yolanda Jones began her career at (Ice Model Management, Cape Town) and later transitioned to (Wilhelmina Models New York). She was the winner of the Nigerian Model Awards (2006) and a Contestant for the 2007 Ford Super Model Of The World competition in New York.

7. Elizabeth Seifu (Ethiopia and Puerto Rican): 5′ 8″ gorgeous Seifu is a PLUS size Model who is signed with Click Model Management. She has featured in Glamour and Essence Magazines as well as appeared on Today Show (NBC), Good Morning America (ABC), Univision and BET.

8. Yordanos Teshager Bitew(Ethiopia): 5ft 10in Yordanos was chosen as a semi-finalist for the 2005 Nokia Face of Africa competition. She was also second runner up for the Miss World Ethiopia 2004. She has since modeled for numerous designers including Badgley Mischka, Ports 1961, Sophie Theallet, Rachel Roy, Armani, Prada, Rock & Republic, Naeem Kahn and Carmen Marc Valvo.

9. Georgie Badiel (Burkina Faso): At any given time when you pick up a fashion/lifestyle magazine at your local store in Europe or USA, you are bound to see Georgie sitting pretty and staring right back at you. Winner of Miss Africa 2005, Georgie has walked the runways for numerous high end designers including Louis Vuitton, Marc Jacobs, Issey Miyake, Halston, Oscar De La Renta, Bottega Venetta, Dries Van Noten and Lacoste. Indeed where many models struggle to make it, Georgie seems to easily get jobs. She has also featured in Russian Vogue, Italian Glamour, New York Times STYLE, Teen Vogue, and Essence Magazines. The highly sought after model who is also signed to M– USE Models has done campaigns for Moschino, MAC Cosmetics and Target for Jonathan Saunders.

11. Sonja Wanda (Sudan): Norwegian native Wanda is signed with various agencies across the globe. She has featured on the cover of British Elle. Wanda has also walked the runways for Max Mara, Richard Nicoll, Ralph Lauren, Malandrino, Marc Jacobs, Proenza Schouler and Fendi, to name a few.

12. Salieu Jalloh (Sierra Leone): is one of the hottest male models in the industry today. Signed with Red Models New York, he has worked for United Colors of Benetton, Sean John and has a role as a model on BET’s Centric TV “Model City“ reality TV show.

13. Gibril George (Gambia): Gibril is signed with Fusion Model Management, New York. He is 6ft 1in and was discovered in London on the “Tube” (subway) by his London agency Oxygen.

14. Atong Ajork (Sudan): At 5ft 10in, Sudanese-American Atong is a beautiful sight to behold. The young model has been gaining momentum since her entrance into the industry walking for some of the celebrity designers in fashion, including Diane Von Furstenburg. She inked her first beauty campaign for Sephora in 2006. Atong has featured in Italian Vogue, Allure, Marie Clarie and Trace Magazines and has done campaigns for Target and Kenneth Cole Reaction.

15. Hawa Diawara (Mali): This Malian stunning beauty is quite a personality. She is determined and very clear on what she wants, especially in her modeling career. Very intriguing is how Hawa has had to confront some requirements in the modeling industry that conflicted with her religious and cultural views. For example, closing the gap in her teeth and modeling in a swimsuit. The 5ft 10in beauty has walked for Proenza Schouler, Brian Reyes and Sophie Theallet, among many top designers. She is signed with Trump Modeling Agency.

16. Nana Keita (Mali)– With a sweet disposition and great attitude, it is no surprise this beauty is one of the most sought after model in fashion. A self proclaimed tom boy, she is signed to Muse Model management and has worked for Vivienne Westwood, Martin Grant, Rick Owens, Betsey Johnson, Tracy Reese, Sophie Theallet, to name a few.

17. Sandra Nyanchoka (Kenya)– She wasn’t exactly the most loved contestant on Tyra’s America’s Next Top Model (ANTM) when she competed in 2009. Nevertheless, there is no denying Sandra is a gorgeous beauty with brains. Since ANTM, Sandra has featured on numerous runways, catalog and commercials. She is currently pursuing her modeling career and simultaneously attending college to become an international journalist.

19. Kelly Moreira (Cape Verde) Moreira never thought submitting her Myspace profile for the 2009 Elite Model MySpace France castings would get her the immediate world wide fame she now enjoys. That, however, is exactly what happened. Moreira went on to become a finalist in the competition and two weeks later, she was strutting her stuff on the runways of Lanvin, Kenzo, Yves Saint Laurent and Dries van at Paris Fashion Week. She is signed to Elite and Ford model agencies.

20. Elsabel Yemane (Eritrea) Signed with Profile Models UK and Elite, Capetown, Elsabel is the new kid on the block whose goal is to be a successful model and journalist. She has worked with numerous clients including Rocawear and Pantene.

21. Ajak Deng (Sudan): Where there is Ataui, there is bound to be Ajak. Born in Australia and signed to FRM Model Management in Australia and IMG in the USA, Ajak has walked for some of the hottest designer names in fashion including Lanvin, Givenchy, Chloe, Marc by Marc Jacobs and Jean Paul Gaultier. When she is not strutting on the ramp, you can find her in some stunning editorials including Arise Magazines.

Modeling: Making the Cover of a Magazine 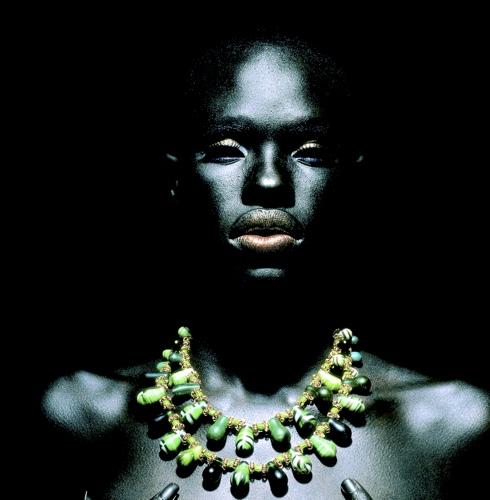