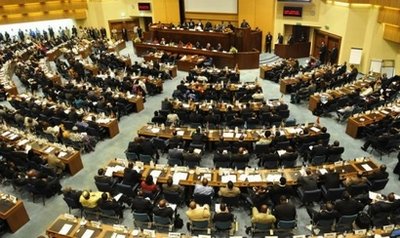 ADDIS ABABA (AFP) – African leaders wrapped up a three-day summit Tuesday, calling for action on coups and increasing pressure on Madagascar’s political foes to honour deals meant to end a prolonged crisis. The newly elected chairman of the 53-member African Union, President Bingu wa Mutharika of Malawi, called on his peers to stand against conflicts and toppling of governments. “We must say ‘never again’ to conflict and war in Africa,” said Mutharika, who took the bloc’s leadership from Libyan leader Moamer Kadhafi, whose controversial stance on the continent’s issues was often at odds with pan-African body. “We must declare war on unconstitutional change of government on the African soil and resolve to take strong and necessary punitive action against all authors of coup d’etat and those that provide them the means to unseat duly elected governments,” Mutharika said.

The AU’s Peace and Security Comissioner Ramtane Lamamra said earlier Tuesday that the bloc had adopted a resolution upping the pressure on Madagascar leader Andry Rajoelina, who seized power in a coup in March and did not attend the summit. “We have already started getting replies from some of the parties but we are waiting for the response of the party that took the unilateral decisions that have called into question the agreements,” Lamamra said. The AU’s approach to Madagascar was last year typical of internal discord, with Kadhafi breaking from the tough stance of the organisation’s executive regarding the Antananarivo regime. . .  more on (AFP)

The President’s Eye For Violence