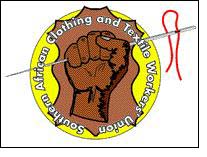 “Up to 7,000 apparel workers in Newcastle, South Africa, have been locked out after 40 employers halted production in protest against a series of raids for labour violations, the Southern African Clothing and Textile Workers’ Union has said.

The moves were in response to raids carried out at 12 manufacturers after allegations surfaced of serious violations of workers’ human and labour rights, SACTWU national organising secretary Chris Gina told just-style today (7 October).

He said that some 40 employers are engaged in the illegal lock out. The union is “mobilising all our legal resources”, calling for employers to explain why they have locked staff out, Gina explained.

“We have issued an ultimatum asking them why we shouldn’t go to court about this illegal lock-out.” The union is also insisting that the staff are paid for the two days they have not been able to work.

According to Gina, one group says it will resume operations by Saturday, and hopes the others will fall in line by Monday. . .”