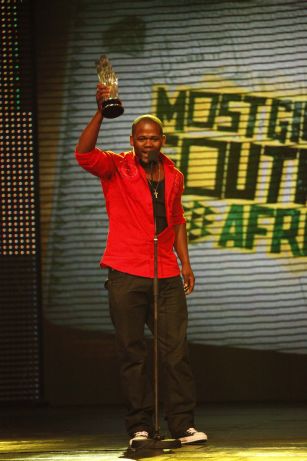 Music fans from all over Africa have spoken, voting in their hundreds of thousands for the winners in this year’s 2010 Channel O Music Video Awards.

Broadcast live for the first time at a glittering event held at the Sandton Convention Centre in Johannesburg, South Africa tonight (Thursday 4 November); winners as voted for by the public in 14 categories were announced – and no category proved to be easy to predict!

Indeed, no single act won more than once – proving just how hotly contested this year’s awards were, with every artist doing their utmost to help mobilise fans to vote.

Snatching the prestigious Most Gifted Video of the Year category was South African hip-hop trio, Teargas with “Party 101”. Teargas has worked long and hard to reap the incredible rewards it is seeing in 2010, including winning a South African Music Award for their album Dark Or Blue earlier in the year.

Most Gifted Female was another hotly fought contest but in the end the winner was Nigerian artist Mo’Cheddah for her song featuring a guest spot by Othello, “If You Want Me”. The Theatre Arts undergraduate at the University of Lagos proved she is an artist to watch by taking the Channel O Music Video Award in this high-profile category.

Black Coffee’s firm hold on the African music scene was confirmed when the DJ, producer and solo artist was named Most Gifted Male at the awards for his track “Juju” featuring Zakes Bantwini. The win caps another highly successful year for the South African artist who continues to prove that intelligently crafted house music can hit the mark at the clubs, on radio, and, of course, on television.

Most Gifted Newcomer saw L-Tido (of South African hip-hop outfit Glitz Gang) shine: his video featuring Tee-Pee – “Calling” – was named the winner in this important category. Nigeria’s P-Square proved their staying power by taking home the award for Most Gifted Duo, Group or Featuring for “E No Easy” featuring J-Martins.

In the genre categories, there were a few surprises with some power players making their presence felt.

One of the latter was Nigeria’s D’Banj whose “Fall In Love” proved a popular winner in the Most Gifted Afro Pop category while his fellow countryman, Naeto C flexed his emcee muscles by taking home the Channel O Music Video Award for Most Gifted Hip Hop Video for the track “Ako Mi Ti Poju”.

“Made in Nigeria for global consumption” is General Pype’s tagline and he proved this when the video for “Champion (Remix)” featuring Naeto C., Vector, Sasha, the late Da Grin and GT took the category Most Gifted Ragga Dancehall Video. Another popular win proved to be South Africa’s Liquideep whose breakout 2010 hit, “Fairytale” gook home the Channel O Music Video Award for Most Gifted Dance Video. And Durban’s position at the top of the kwaito popularity charts was confirmed again when Big Nuz featuring DJ Tira romped home to win the Most Gifted Kwaito Video category for the monster hit, “Umlilo”. Finally, it was left to Urban Reign to rule supreme in the last genre category; the Joburg-based group’s video for “Addicted” won the award for Most Gifted R&B.

The competition didn’t stop there – continuing all the way through the regional awards with Most Gifted Southern Video going to South African Pro for “Sekele”, Most Gifted West Video being snatched by Nigeria’s 2Face with his video for “Implications” and Most Gifted East Video being won by Ugandan-born Obita for his video featuring Loyiso, “Everybody Dance”.

In a night in which Africa’s most scorching entertainers – including co-hosts Lungile Radu and Thomas Gumede; performers like Liquideep, Teargas, Dama Do Bling. Wyre. Buffalo Souljah. Sasha. D-Black & Kwaku-T and guest presenters from the Channel O family – took centrestage, the 2010 Channel O Music Video Awards scored a coup by being broadcast LIVE throughout Africa. Musical director, Zwai Bala, pulled out all the stops to deliver a non-stop display of brilliant African talent, that was only added to when Somalian-born global star, K’Naan was given the Special Recognition award.

MOST GIFTED VIDEO OF THE YEAR
TEARGAS – PARTY 101