“Known for his roles in “Lost” and “Oz,” Adewale Akinnuoye-Agbaje is now telling a far more important story — his own. The actor is making a film entitled “Farming” about the practice followed by many Nigerian parents in 1960s and ’70s Britain of having children informally fostered. Akinnuoye-Agbaje, 44, was raised in such a situation, making for a fascinating life story, which included the shocking revelation that he became a skinhead as a teenager in an attempt to fit in.

When he was six weeks old, his parents – a Nigerian couple studying in London – gave him to a white working-class couple in Essex, he says in a new interview with The Guardian. He lived in his foster home with more than 10 other African children, including his two sisters. The climate at the time was such that he grew up fearful of being physically attacked because of his skin color. And although he was black, Akinnuoye-Agbaje thought of himself as white and developed a fear of his own race. So much so that when he occasionally saw black sailors in his town, which had a naval dockyard, he would run away from them. “I just remember being petrified,” he said. “It was as if they were the bogey man to us. Fish and chips and corned beef, that’s what I knew.”

When he was 8, his biological parents arrived unexpectedly and took him and his sisters to Nigeria. He couldn’t speak the language and had trouble fitting in, so his parents became frustrated and sent him back to England – without his siblings – a year later. Settling back into life with his foster family took its toll and he had what he called a cultural identity crisis. “I wanted to assimilate and go back to the abnormal normality I knew,” he told The Guardian. “I wanted to wash off the experience of Africa but obviously I couldn’t because that’s who I was.”

As a teenager, Akinnuoye-Agbaje turned to violence to defend himself, but he also attacked others. “It was a time of standing up and standing your ground or running, and there wasn’t anywhere to run,” he said. “The local skinhead gang really ran the streets. They made my life – and anyone’s who was a shade darker than pale – a misery.”
So he made a drastic decision – he became a skinhead. Not only did he take on the look of one, shaving his head and wearing the clothes, but he adopted the racist attitudes as well. . .” –Yahoo News 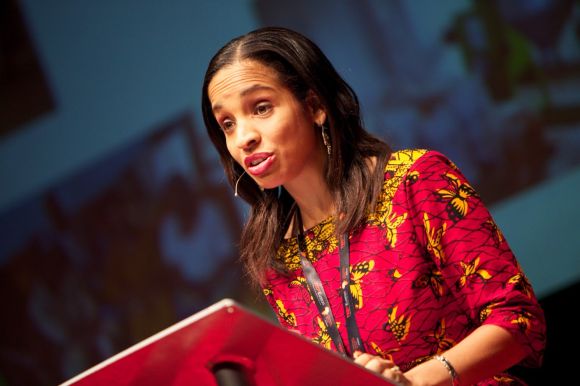