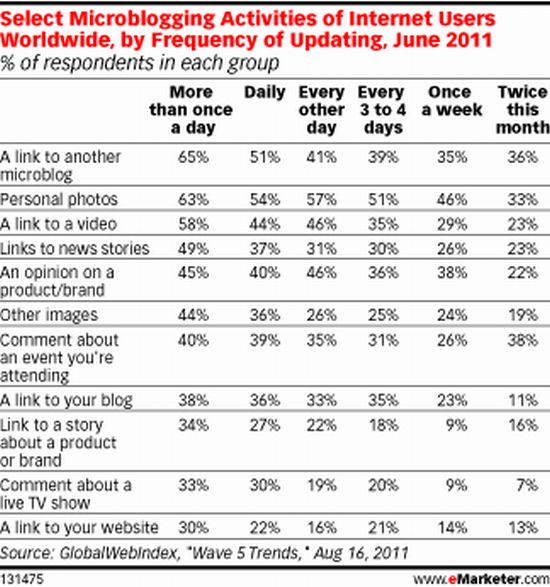 As we continue with our Bloggers’ Edition, check out the latest finding on Social Media use and its application to marketers. Bloggers should take note. “The number of Facebook users in the US will increase 13.4% this year, eMarketer estimates, after 38.6% growth in 2010 and a whopping 90.3% rise the year before. The rate of adult Twitter user adoption has similarly begun to plateau, dropping from 293.1% growth in 2009 to 26.3% this year and still slowing. In many developing countries, these and other networks are seeing their audience growth taper off as most new users come from other countries such as the BRIC nations and Indonesia.

Meanwhile, users in more advanced countries have been shifting their behaviors after spending years on the sites. According to the GlobalWebIndex “Wave 5 Trends” report, social network usage growth has all but stopped among 16- to 24-year-olds in the US, and in a few countries usage within this already-saturated group is actually declining. . .The report also noted the high demand for professional content. Traditional sources of news were dominant, including among microbloggers and heavy social network users. And when asked what they want from brands, consumers ask for knowledge and, among younger adults, entertainment. Brands have an opportunity to use the transmission-oriented social media landscape to disseminate valuable content to followers—who in turn are hungry for interesting and entertaining content to transmit . . . ” Emarketer.com

Obama, Change We Can Believe – Er . . . Not so Fast Says Lola Adesioye