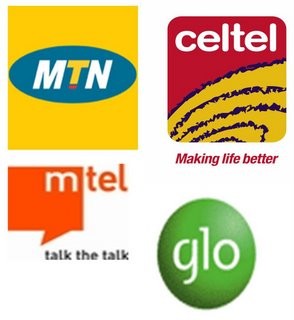 I like to look at things comparatively and I think to fully appreciate where you are, you need to remember where you’re coming from. The Nigerian Telecommunications sector has improved vastly compared to the early days that were completely restricted to the rich and upper class. “Call me on my 090” was a status symbol, it said “I’m so busy making money that I have to answer urgent phone calls on the go”, a luxury item whose price could pay the salaries of some, for at least 5 yrs. Well those days are gone, I had been away during the formative years of MTN, Econet (now Celtel) and Glo, but right from the airport I noticed that mobile phones were…well everywhere, everyone had one, some even had more than one.

The growth of the telecommunications sector has reverberated through the economy, providing more jobs and opportunities for the many consultancy services that work with these companies, touching on the IT sector, and Banking sector, enabling the growth of ATM(automatic teller machine) networks. The large population of the country has provided a ready market for the services of the GSM companies, who continue to rake in huge profits year after year.

Nigeria now has a blossoming CDMA service as well, from providers like Starcomms, Reltel, Mtel, and most recently Visafone, most Nigerians now own a CDMA line as well as their GSM lines. CDMA networks are cheaper, but the quality of service is not really impressive, there’s a lot of room for improvement, and hopefully they realise the potential of the market.

The rapid growth of this sector has however not been without any problems, many of the companies say that the adverse power situation across the country has affected the level of service provided, their base stations run on generators for 24hrs every day. There have been complete blackouts of various networks, where users are unable to load airtime cards on their prepaid phones and several instances of dropped calls, which eventually prompted a senate committee to look into the disruptions. The GSM subscribers in Nigeria have exceeded the 45 million mark, a staggering amount which is now the largest in Africa, I do not know how many of these lines are actually still active, but that’s a lot. Many companies use CDMA or GSM networks for their official lines, The national telecommunications company NITEL, has been hit by many problems and can not be relied upon, but with the sale of NITEL to Transcorp, there is some hope that a much needed boost will be given to the company to enable it function at maximum capability.

Wanted Models and Stylists for ELAN NEXT Fashion Page!