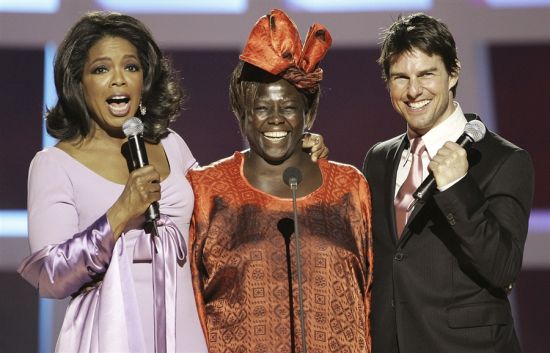 “It is with great sadness that the family of Professor Wangari Maathai announces her passing away on 25th September, 2011, at the Nairobi Hospital, after a prolonged and bravely borne struggle with cancer. Her loved ones were with her at the time,” the Green Belt Movement announced on its website. Maathai was the founder of the Green Belt Movement that encouraged women in rural Kenya to plant trees to improve their livelihoods through better access to clean water, firewood for cooking and other resources. Her movement planted an estimated 45 million trees in Africa and assisted nearly 900,000 women to establish tree nurseries and plant trees to reverse the effects of deforestation, according to the United Nations tribute to her.

“Her passing is a loss for the people of Kenya and the world,” Ban Ki-moon said in a statement published on the UN website. Maathai was a “globally recognized champion for human rights and women’s empowerment” and a “pioneer in articulating the links between human rights, poverty, environmental protection and security,” he added.

“She was a visionary who saw over the tree canopy, but never lost sight of the roots.”

“She was a visionary who saw over the tree canopy, but never lost sight of the roots,” said Jan McAlpine, Director of the Secretariat of the UN Forum on Forests, adding that Maathai was a great woman and a wonderful leader who made a difference both in Kenya and around the world, one tree at a time.

“Wangari Maathai was a force of nature,” UNEP Executive Director Achim Steiner said in a news release. “While others deployed their power and life force to damage, degrade and extract short term profit from the environment, she used hers to stand in their way, mobilize communities and to argue for conservation and sustainable development over destruction. . .’

Should I Create a New Business, Buy an Existing One or Buy a Franchise?