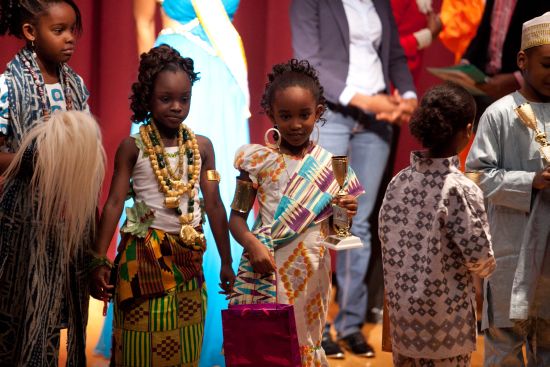 Linord Moudou, President of Racines Heritage and creator of Little Malaika International said, “This was such an exciting evening. The kids knew so much about their tradition, culture, food and dance it was amazing just to watch them. “We were able to bring families together to promote multi-cultural exchange among the diverse communities, but most importantly, we set out to foster and encourage positive self- confidence, competitiveness and leadership in these children, and I believe we achieved that.”

ARIK Air, West Africa’s largest commercial airline and official sponsor of the event, donated two round trip tickets that were auctioned to raise funds and resources to help provide scholarships and logistical support for girl’s education and special education for children with Autism in Africa. Kobina Brew-Hammond, Account Manager, U.S. Sales & Marketing of ARIK Air International, was on hand to present Miss Malaika and the tickets to the winner of the silent auction.
Other highlights of the event featured special performances by Eileen, violinist member of MCYO Symphony Orchestra and RHF Global Ambassador for Girl’s Education; Radha Dutta (India) owner of Kalalayam Dance Academy and traditional Hula dancer, Mokihana (Hawaii).
The event was hosted by Nunu Wako, host of the Nunu Wako Show and Jackson Mvunganyi, host of Voice of America’s Up Front. The judges were led by Brigitte Kobenan, Founder, Autism Community of Africa & Mrs. Congeniality World 2008, who also partnered with RACINES Heritage on this event.

Daniel Koroma, title, presented Linord Moudou with an award given by Ike Leggett, Montgomery County Executive for promoting cultural diversity in the county.

Shopping and Goodies: More Hot Trends for Spring to Shop!